Nonviolent, Civil-Society Organizing in the U.S. and Opportunities for Solidarity with Iraq

Let me start by saying a little about myself. On September 11, 2001, my sister Laura was killed in the attacks on the World Trade Center in New York. I had been an anti-war activist most of my life, and the events of 9/11 and the responses of the President Bush and other politicians made me fear that the U.S. would pursue revenge and war – and violence would spin out of control.

I wanted to pursue nonviolence, and I was very fortunate to find other people whose family members were killed in the 9/11 attacks who agreed. Together, we founded September 11th Families for Peaceful Tomorrows. We are very aware, that we were NOT successful, that today the world, and especially Iraq, suffers from exactly the proliferation of war and violence we feared would follow 9/11. I want to apologize for the war that my nation waged in Iraq – it was a war peace activists worked hard to stop, but we failed and I am deeply sorry.

Yet, I still firmly believe that nonviolence is the path we must follow and that as civil society activists we can work together in solidarity. So I am grateful to be here today to explore how we can support one another to end injustice in our respective countries and build communities where there will be lasting peace and respect for the rights and dignity of all.

My talk will focus mostly on the U.S and some of the frightening developments on our national political scene – as well as popular protests by U.S. civil society that may point a way forward to positive change through nonviolent means.

When we consider these two trends together – widespread suppression of civil society and a huge refugee crisis – it becomes very clear that we as civil society activists need to become much more successful and effective at standing together in solidarity to defend our rights, to oppose governments and non-governmental forces that aim to suppress civil society, and to promote just and lasting resolution of the conflicts that are driving so many people to become refugees within their own countries and around the world.

All of this is occurring in the context of globalization in which the interests of multi-national corporations too often take precedence over the needs of individuals, our families, our communities, and the well being of the environment on our planet. There is growing inequality of wealth and income – the very wealthiest are immune or protected from most of the effects of war and violence; they may even profit from it.

Now, if we focus on the U.S., it is clear that the nonviolent organizations working for justice and peace are facing great threats. So much has been said about what the election of Donald Trump means. In my view there are four important points to emphasize:

I must speak honestly about the U.S. – it is my country, a country that I love. It has been an inspiration to people seeking freedom and democracy; it has welcomed people from around the world to become U.S. citizens. But, it was also built upon the violence of stealing land from the Native Americans who lived there – an injustice that has never been corrected. The U.S. also enslaved millions of black Africans for more than two centuries and today U.S. citizens of African heritage are still profoundly discriminated against and tyrannized by the police. All this history, the good and the bad, means that in the U.S. activists need to be very self-critical about how we in the U.S. fail to live up to the principles we say we stand for.

U.S. activists need to address the divisions that exist within our society. Very often, fear divides us – fear of those who are of a different religion, or race, or nationality, fear of outsiders and refugees. One of the greatest challenges I see for building the social movements we need is to build bridges between different communities, to open up dialogue that will counteract the fears some government officials use to justify restrictions on civil society and our human rights. There are signs that a broad movement for justice and nonviolence may be growing in the U.S. Amid all the dreadful election news, opposition to the Dakota Access Pipeline led by Native Americans at Standing Rock have been a source of great hope. The protests aim to stop construction of an oil pipeline under the Missouri River, which is the source of water for drinking and irrigation for a huge region in the Western U.S. The protests are based on Native American religious traditions, but protest leaders have welcomed people of all religions and those with no religion. The protests are absolutely nonviolent – in fact the protest leaders went out of their way to include and embrace those in the community who wanted the pipeline built because they might get temporary jobs. The leaders sought dialogue about alternatives that would benefit everyone.

The slogan of the Standing Rock movement is “WATER IS LIFE.” As I watched the protests at grow, I could not help but think of the work that activists of the Save the Tigris Campaign have been doing here in Iraq and how these two movements could support each other. For now the pipeline has been halted – but we do not know what the Trump Administration may do.

While I am here with you, people are organizing in Washington, D.C. to protest at Trump’s Inauguration – in particular to oppose the rhetoric of hatred, violence, war, privilege, and injustice that he and many of his appointees use. The day after the Inauguration there will be massive marches in support of women’s rights in Washington, D.C., New York, San Francisco, Los Angeles, Philadelphia, Boston, and elsewhere.  I hope they will be as impressive as the nonviolent protests that have been taking place throughout Iraq and the KRG since 2011.

Our goal in the U.S. is to build a “Movement of Movements” – that opposes injustice in the U.S. – racism, anti-Muslim acts, sexism, and poverty. This also links us, as peace and nonviolence activists, to opposing the injustices caused by the wars that the U.S. fights throughout the world. Most importantly, we will advocate against military spending and promote spending on education, healthcare, other human needs, and efforts to protect the environment.

Endless wars have cost millions of lives and trillions of dollars, while the basic needs of growing numbers of people go unmet. Total U.S. military spending in 2017 will exceed $620 billion, while the United Nations begs for a mere $550 million to address the refugee crisis in the Middle East, Africa, and Europe.

Ending attacks on U.S. Muslims, which have increased alarmingly since the 9/11 attacks, is also crucial. Any restraints on the civil rights of Muslim-Americans will leave all of us less safe and less sure of our rights.

What can we do together as civil society activists to promote lasting peace? What exactly do we mean by solidarity?

These issues, and many others will be the focus of the very important conversations we have together, today.  I am honored to be here with all of you. I look forward to the work we can and will share. 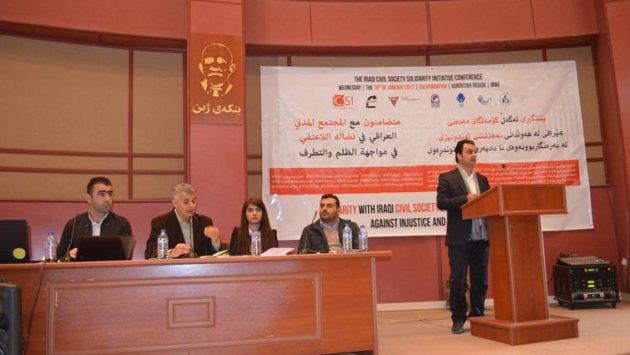 Lessons from Sulaymaniyah on International Solidarity 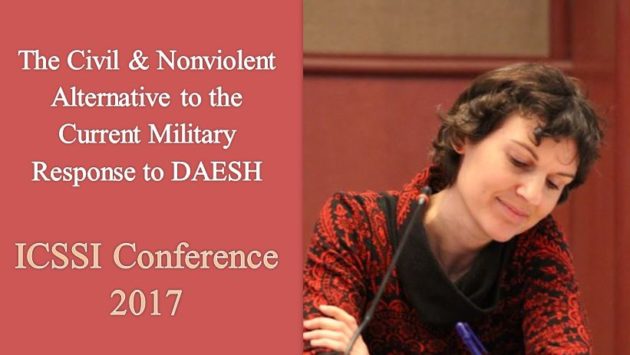