When the Mosul offensive really started, back in March 2016, people in the West did not realize it. When it escalated into the Battle of Mosul, in October, journalists called the office of Un ponte per… in Italy asking how many days it would take to liberate the city. We told everyone that it would be a matter of months, several months, and that success was not guaranteed, but people were sceptical. In Europe they did not believe that Daesh could resist for so long, facing a Global Coalition of 68 countries committed to degrading and ultimately defeating Daesh. Meanwhile today people keep being displaced, houses get destroyed, soldiers and civilians die and cars explode in Baghdad as a retaliation of Daesh.

Hence, what is lacking for success and true liberation? The international community apparently forgot that all underlying conflicts that existed in Iraq before Daesh arrived, are still very much alive. Prejudices among communities keep growing, and fear towards the others as well, just like in Europe people tend to fear immigrants from the Arab world, not understanding that they are the first victims of terrorism. Hence our countries keep investing in the military response to terrorism but they do not train our diplomats on peacebuilding and mediation, they don’t support Iraqi and international NGOs and social movements who promote coexistence and reconciliation, they don’t use enough resources to give humanitarian support to victims of this war.

The Global Coalition against Daesh invested over 50 million USD in the UNDP Funding Facility for Immediate Stabilization to support immediate needs in newly liberated areas, including at least one peacebuilding program. But in the same period it conducted more than 13,500 air strikes in both Iraq and Syria. The average daily cost of these bombings is hard to tell for the whole coalition but for the US Department of Defence it was 11.7 million USD per day in mid 2016 and may be much higher now. So, how can we find a better balance than 50 million spent during that initial phase of stabilization, and 12 million spent per day on bombings? How can we honour all combatants from Kurdistan and from all over Iraq who lost their lives to liberate vast regions of the country, by managing properly this new phase?

The solution is to prove that Iraqi people can rebuild their country together, allowing everyone to return to liberated areas, organizing collective work to rebuild schools like our friends from Hīt did, instead of relying mostly on projects and cash-for-work by international agencies and NGOs. Part of the solution may be to change words, using “peacebuilding” instead of “stabilization” to define the process of full liberation of Iraqi people, from fear and violence. The solution could be to build Local Peace Committees in each town, so that key people can assess and analyse local conflicts, prevent their escalation and transform them through nonviolent means. The solution is to build a national reconciliation process from the grassroots, not waiting for the Government with all regional powers to propose one. But we should remember that any effort to build peace goes against strong interests, and that we have more dangerous adversaries than Daesh. In 1961, American President Dwight D. Eisenhower ended his presidential term by warning the nation about the increasing power of the military–industrial complex: an informal alliance between a nation’s military and the defence industry which supplies it. He said:

In the councils of government, we must guard against the acquisition of unwarranted influence, whether sought or unsought, by the military-industrial complex. The potential for the disastrous rise of misplaced power exists and will persist. We must never let the weight of this combination endanger our liberties or democratic processes. Only an alert and knowledgeable citizenry can compel the proper meshing of the huge industrial and military machinery of defence with our peaceful methods and goals, so that security and liberty may prosper together.

We think these words are still valid today for Western Nations, which are overspending in the military response to terrorism, and overlooking all civil efforts for reconciliation and transitional justice. And they are valid for Iraq and Kurdistan, even if your armies are using weapons sold to you from the industrial complex of western nations, that make gains out of this deadly trade. They are stealing money from our national budgets, because our military industries are heavily subsidized by the state, and therefore in Italy today I have to pay a private school to send my son to kindergarten, and my maternity leave has been much shorter than yours in Kurdistan.

We as global civil society must denounce this business and all vested interests behind it. And the best way to fight this military-industrial complex is to prove that peacebuilding measures are effective in transforming conflicts, and nonviolent struggle is the only way to build sustainable change. 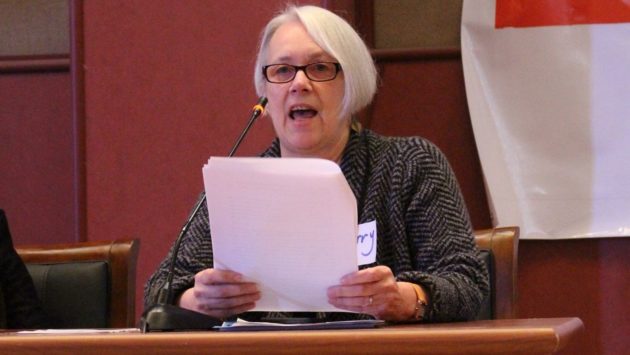 We Are Part of a Global Struggle: Building International Solidarity