Sectarianism and sectarian intolerance is a problem in Iraq, and one that influences many important interactions within society. In this paper we present an international framework in which to address the issue of sectarian intolerance, and attempt to solve this problem, which to date, tends to be met with silence or is exploited for the benefit of one sect and to the detriment of another. This is not to deny previous efforts to address this issue, it is only to acknowledge that they have been only partially successful, and at times, have failed completely. Worse still, some efforts have been counterproductive, and have actually enhanced and deepened the problem of intolerance. Intellectuals and Iraqis dedicated to a harmonious and flourishing Iraq must work hard; they must use all tools available to them, and learn from previous humanitarian experiences. Iraqis can build on all that past examples have shown, they can ground their new efforts firmly in the foundation that global humanitarian knowledge has already established. Iraq can continue to enrich that heritage with its own experience. I am confident that we can find solutions to the grave problems that intolerance creates; I believe that we have the will, and that we possess the vital intellectual infrastructure both to proceed and succeed.

Intolerance and intolerant tendencies from a sociological perspective

Many social studies indicate that when intolerance reaches a certain level of intensity, it becomes a factor which undermines social unity, causing a disturbance in the balance of social-psychological health.  This imbalance corrupts society and threatens its very existence. On the other hand, if tolerance, affection, and cooperation are the dominant tendencies (Universal Tolerance), if these qualities prevailed among members of individual societal groups, they might well thwart those insidious inclinations to discriminate. Social and psychological stability would then be the hallmark of tolerant communities.

Many variables play a role in the rise of different forms of intolerance:  for instance, apathy, hatred and hostility. A community may acquire intolerant tendencies as a result of external circumstances. Whatever their source, studies define tendencies as having a fixed orientation; they represent stable orders within the cognitive, emotional and behavioral processes for both groups and individuals. A tendency towards intolerance includes the following elements:

An intolerant judgment will be manifested in negative behavior depending on the degree of its severity, but it will always lead to irrational behaviour.

Hatred is often grounded in a false yet fixed and rigid foundation, and is generally felt about and expressed towards a specific group as a whole, or towards specific people as members of that group. Intolerance implies a deviation from the standards of rationality, justice, and balanced human emotions. This deviation leads to behavior which can range from indifference (through rejection and exclusion) to active hostility.

Discrimination is the behavioral component of intolerant tendencies; it is the explicit expression of a person’s stereotypes about some people or groups. It refers to forms of inequitable behavior directed towards members of particular groups and not others.

The absence of common values and standards

Developing a strategy that can effectively take on intolerance and confront its detrimental effects on Iraqi society demands agreement on the organizing values of the Iraqi state, which can shape and guide practice, and help to mediate tensions that arise when different groups/sects come into conflict. A proper study of any such strategy will need to be structured by established scientific standards that allow for the judgment of outcomes, especially by intellectuals, social and political elites, community leaders, NGOs, and leaders of the Iraqi state itself.

Moral maps are the basic and essential determiners of an individual’s or a group’s tendencies; the map embodies and organizes particular tendencies, gives them content, and plays an important role in the initiation and the development of the tendency.

The moral map of an individual as defined by P. Kelvin, clarifies his /her tendencies towards people, thoughts, and the paths he/she chooses for work and action.

Any attempt to confront and treat intolerant tendencies in a society demands the creation of a new moral map. The lack of such a map caused many previous attempts to deal with intolerance in Iraq to fail; people became partial, and could not maintain the objectivity necessary to resolve dilemmas caused by intolerant attitudes. Sometimes they even lost sight of their proposed objectives and turned to embrace other, more exclusionary and intolerant ones. As a result, many of these early attempts worked against themselves, strengthening intolerance and contributing to the promotion of a culture of hatred. Most problematic was that most of these attempts did not break down the walls that divide people, and so could not facilitate healthy interaction among a wide range of different people and groups.

Sociologists agree that intolerant tendencies occur as a result of the deviation from three ideal standards:

If intolerance is the result of a deviation from these standards, we need to remind others and ourselves of them, we need to urge everyone to commit to them, and encourage the intellectual elites to teach and preserve them.

Within each standard is a group of specific values that form the larger, general map of values alluded to above. However, the real goal is to turn these standards and values into material for dialogue among intellectual elites who can develop them further. First however, we should review previous attempts to make such standards central themes for productive dialogue, so as to avoid the pitfalls they encountered. It will be also useful during the first stages of this project to determine the general structure of the society that we are dealing with, thus we can ensure that the programs we suggest will help us deal with the Iraqi situation appropriately and effectively, according to what is in fact happening ‘on the ground’.

Should the situation remain the way it is in Iraq?

Steps to be taken by intellectuals:

Programs and strategies which might be used to reduce intolerance

Committees or working groups to be established by NGOs 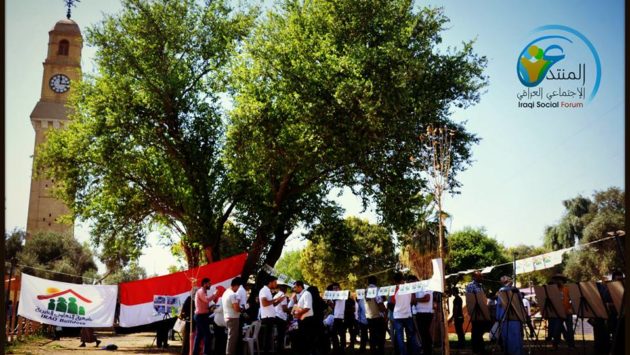 Announcing the Iraqi Social Forum 2015. Join us in Baghdad!

In Hit and Ramadi, Young Volunteers Work for Peaceful Coexistence and Nonviolence