“It was great experience to be part of the Interpretation team of the Iraqi Social Forum (ISF). It wasn’t only a team, but a family that influenced me in a very positive way. I met new people and heard their stories, I learned interpretation techniques that I wasn’t aware of and wouldn’t have been aware of without this unique training”.

Teba Yassin, a third-year student at al-Khwarizmi Engineering College, joined the ISF Interpretation Team after participating in the third ISF season during which she helped her friends on the Shakoufyan team to prepare their booth on the heritage of Heet city. She was impressed by the atmosphere and activities of the forum at that time, and was encouraged to volunteer with the Interpretation team because of her proficiency in English.

The training was even more impressive than what she’d experienced before, with 19 young activists gathering in Dokan, Sulaymaniyah of KRG, from 18-22 July 2017. They were surprised by their common interests and ambition. Their mastery of English language and their love for volunteering, along with a desire to be an active part of civil society brought them together, and the Iraqi Social Forum created a distinctive opportunity for them: a summer training camp, which coincided with the youth camp offered by the Sports Against Violence team. This gathering gave participants space to learn about the work of both teams, and allowed for more cooperation and success for all their activities.

The training was led by the Spanish interpreter and trainer, Sergio Cordeiro, who came specially as a volunteer to prepare a team of professional Iraqi youth interpreters. Sergio, who had previously coached with his Tunisian colleague Nayua Abdelkefi in a training for 19 young volunteers in 2013 (before the first season of the Iraqi Social Forum), did not hesitate for a moment when he was invited to oversee the training of another group of young volunteers this year. He was fully dedicated to the training, preparing material beforehand, and showing complete engagement during the sessions themselves. His distinctive way of leading the group raised the morale of all the trainees.

The first day of the training established a working definition of ‘interpretation’, and discussed types of interpretation techniques, focusing on the theoretical and ethical aspects that the professional interpreter must adhere to, and the mistakes he/she must avoid. The trainer also explained the key differences between interpretation and translation.

The second day focused on note-taking and memorization techniques, and gave participants time to practice the technique of shadowing, as well how to speak in public in order to raise their self-confidence. The trainer also provided a booklet containing the most important terms to be recalled during interpretation.

The last three days of the training, dealt with practical exercises for simultaneous interpretation from Arabic to English and vice versa. Each trainee practiced interpreting different kinds of speeches using the interpretation equipment of the Iraqi Social Forum. The trainer concluded the training with general advice and tips for a professional interpreter to use while interpreting in forums and conferences.

Sergio provided helpful criticism, highlighting the most important weaknesses of the individual participants, and giving each trainee effective tools to address them. He stressed that continuous practicing is all that the trainees need in order to be prepared for the ISF event next November 2017. This five day training was held in conjunction with the Sports Against Violence youth camp, giving trainees the opportunity to participate with their peers. All the members of the youth camp worked with enthusiasm and energy in order to make one of the most important and largest events of the Iraqi Social Forum a success. This was the largest training held outside Baghdad since the establishment of the forum in February 2013.

The participants of the interpretation team agreed to continue their collective practicing after returning to Baghdad. The forum space will be a helpful environment in which to develop and improve their performance through regular and specialized sessions.

The training was conducted with the support of the Norwegian Karibu Foundation, in cooperation with the Information Center for Research and Development, the Iraqi Civil Society Solidarity Initiative (ICSSI) and the Italian organization Un Ponte Per… with an exceptional effort of the secretariat team and volunteers of the Iraqi Social Forum. 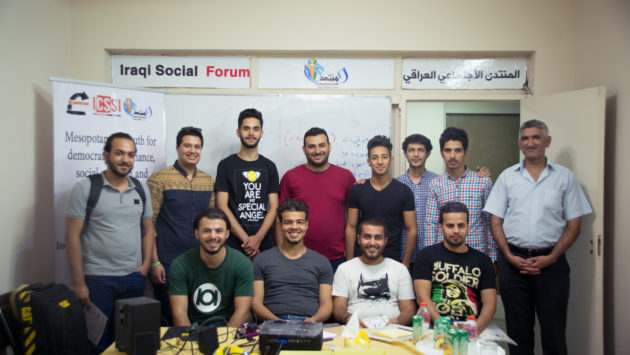 Training on the Dangers of the Iraqi Cybercrimes Draft Law 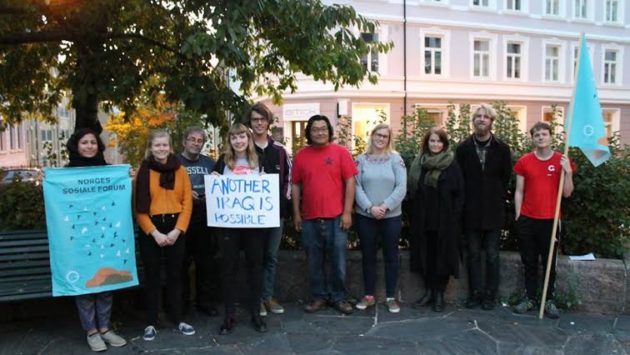