Ali, an ambitious young man who believes that music is a benevolent human force, dreamed of making music ever since he was a child. Because he was raised in a devoutly religious family in Al-Najaf city, he was banned from playing and studying music for many years.

Despite familial and religious restrictions,, Ali had shown a keen awareness of music since his childhood: from an early age, he was capable of distinguishing among many different sounds, he could memorize songs from movies and TV series or random musical pieces and tunes he heard outside his own home. Ali used to participate in school musical competitions, and it was there that he discovered his love for piano. He started to learn it secretly, without his family knowing. He also learned musical writing and reading, despite the continued rejection of music by his religious community. In short, his love for music overcame many of the challenges limiting him, but his dreams remained imprisoned by the rejection of his community.

When he grew older, Ali decided to make his dream come true. He continued to learned all he could about music, as it had always matched his way of thinking. He found he had a natural talent, and his passion for this art form grew stronger still. Ali studied different musical genres, he read many books about the various fields of music, and he found it to be an art that carries a message of love, peace and unity.

On 25 September 2018, the Arts of Peace team of the Iraqi Social Forum put out an electronic call for people interested in participating in a special training for music, ‘Music of Peace’. More than 70 musicians and singers, both women and men, responded. Ultimately, registration for the training was limited to Baghdad residents alone. Ali hesitated before applying, afraid that his residency in Al Najaf would prevent him from taking part. And although Ali had married and moved out of his parents’ house, his love for music still caused some tension when he returned home. But he ignored his fears and filled out the online the form. Ali waited, silently hoping against the odds that he’d be chosen to be part of this musical opportunity and have the chance to collaborate with a team that shared his same love . One day, soon after he submitted his application, Ali’s phone rang: it was the Arts of Peace team informing him that he had an appointment in Baghdad to qualify him for the training.

With all the courage and determination he could muster, Ali arrived at the Iraqi Social Forum headquarters in Karrada on 4 November. He sang with a voice that astonished not only the judges, but everyone from the ISF who was present that day. It was abundantly clear that Ali was not only a musician but an incredibly talented singer as well. He was awarded a place in the training, despite the fact that he was from Al-Najaf.

On 10 September, the first day of the Music of Peace training, musical instruments filled the Iraqi Social Forum’s hall. All the participants who were chosen by the judges attended (3 young women and 22 young men). Ali arrived carrying his keyboard and met the other musicians there. They were welcomed by Mr. Ali Saheb, ISF coordinator, who gave them a brief overview of the ISF and its work. Next, Ms. Fatima Al-wardi, coordinator of Arts of Peace team, explained how the team aims to use art as a tool against violence. Participants were then introduced to Luca Chiavinato, an Italian music teacher and oad player. Luca told them about his desire to create music of peace, and his project to spread the music across the world. He divided the musicians into three groups: jazz, classical and folk music. Each group worked on playing a single piece to be performed later for the group as a whole. Ali was part of the classical music group which sang and played, bringing joy to the hearts of those who listened. At the end of the first day the three groups presented their work which revealed an astonishing level of creativity and talent.

Everyday Ali spent two and half-hours tirelessly commuting from Al-Najaf to Baghdad to attend the daily trainings with other players, with nothing but his dream before his eyes. He paid his own way, traveling back and forth between the two cities, turning down help from the ISF to cover his costs.

During the next days of training, a striking verse emerged from the training hall:
“We’ve lived long and witnessed a lot
In this world there is not
Another land as beautiful as ours
Love and goodness will always keep us united”
It was written by Ali and was played by all the musicians who attended.

The song was performed in both Arabic and Kurdish and was based on a Turkish one called “Eskudarah”.
On the fourth and fifth days of the training, the musicians rehearsed and sang a lot. They played folk music pieces, classical pieces and they worked on perfecting “the Syrian string”. Coach Luca’s main goal was to create a musical piece that combined different languages.
At 3 pm on 15 November, Ali arrived before all the other participants and played notes that combined both sadness and joy. The sounds he made reflected the mood on the last day of their rehearsals together. Ali had shared different musical ideas with the group, many of which were practiced by the group on their last day. Luca picked some pieces to be played during the festival marking the conclusion of the ISF’s 5th season, and two musicians were chosen to supervise the team as a whole and their next rehearsals.

At the end of the final day, the whole team gathered for dinner and received certificates. They said goodbye to their Italian music coach and the representatives who came from the Kurdish team “Mshakht”.

The Music of Peace training was part of the Arts of Peace team’s activities within the ISF. It receives funding from the Karibu Organization and works in cooperation with the Information Centre for Research and Development. 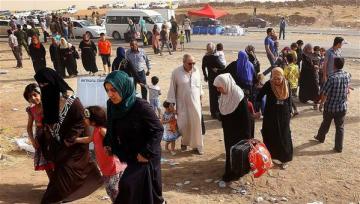 Training on Building and Running Advocacy Campaigns in Nasiriyah