Among the activities of the Iraqi Social Forum in its second round, the forum with the Solidarity Center/ Iraq program jointly organized a discussion session on the 3rd of October, 2015 in cooperation with Iraqi trade unions, at the Abu Nu’as park in Baghdad. The objective of that session was discussing the role of trade unions in social peace and promoting the freedoms and social justice. Fifteen participants from 3 major Iraqi labor federations (GFITU, FWCUI, and GFWUI) participated in this activity, together with other none unionists civil society activists.

Several topics were addressed at that session, including the role of unions in promoting social peace and the achievements of trade federations and unions in 12 years of their activities since 2003, as well as the role of union freedoms in enforcing public freedoms, the role of trade unions and federations in extending social justice , the visons of trade unions and federations on the future social peace and social justice and freedoms under the prevailing deteriorated economic circumstances in Iraq.

The session covered important topics that not only concern trade unions or federations, but also relate to the future of Iraq from political, economic and social aspects, yet what the future of social peace is expected to be like in Iraq, at the time that the government is in-capable of implementing actual political, economic, social , or security reforms. Participants from trade unions reviewed what their unions had done to promote social peace in Iraq throughout their previous activities and highlighted their worker awareness campaigns that focused on peaceful coexistence, rejection to sectarian conflicts, and warning from the future threats of those issues on the level of individuals and or the society as a whole.

The trade federations did not only raise awareness among workers, but took additional steps by reaching out and addressing the community in Iraq through the statements that unions issued in several occasions, and listed that topic as a priority in union’s struggle. That was obvious in the recommendations of general congress and central councils meetings of union organizations.

Unions elevated their activities from the level of dialogue to the level of practical steps such as assisting displaced Iraqi citizens that had to leave their homes and cities after ISIS occupied their region, as well as reminding the Iraqi society that what is going on now is a result of the sectarian escalation and false government trend that is based on sectarian quota that led to a division in the society through sectarian political campaigns that rallied to promote sectarianism aiming to achieve instant personal interests, rather than the future of Iraq and its people.

The participants also discussed governments’ reform attempts; they considered them not actual and will have no influence in improving the general situation in the country. They also discussed how some unions consider the topic of social peace as a step towards shrinking the gap of conflict between workers and employers and to fight discrimination, but in Iraq it took a wider range and put the unions in a tough spot, it became a challenging mission to fix all negative phenomenal acts that threat  social harmony in the country in general and not only workers and employers. Participants stressed that trade unions are the only entities that are capable of promoting social peace; they are unique because they remained pure and clear from sectarianism, division or discrimination among their members, in any way. There was also a serious discussion also on the role of Iraqi trade unions in passing the new labor law that was approved by the parliament in August 2015 which is considered among the best labor legislations in the entire region and would likely contribute in a significant way to achieve social peace , and be a tool in workers’ dispute resolution, if it was effectively implemented on the ground. The implementation of the law remains mainly the government’s responsibility through its labor inspection committees of MoLSA.

The participants expressed their concern that social peace is seriously jeopardized because of the government’s economic policies and its direction towards privatization and restructuring the public sector general corporations and self- funded companies, laying off workers, pushing forced retirement and enforcing policies on abstinence on workers, civil servants and low income and poor individuals, and that will cause catastrophes and will marginalize a large category of Iraqis, which happens to be the working class . That will surely reflect on social peace and widen the gap between different categories in the community. The future financial status in Iraq is another significant factor that effects social peace  as well as the governments steps towards restructuring based  on its borrowing of loans from the World Bank and the IMF, and that will apply a concerning shade on job security , decent work conditions, providing job opportunities, social protections, education, healthcare and other services that improve the living standards and the quality of life to all Iraqis. The urgent need to set a unified trade unions strategy

Participants didn’t forget to tackle the topic of terrorism and its impact on social peace and social justice  in Iraq, and made it clear that unions will totally stand against terrorists and whoever funds them, they emphasized that terrorism came to the middle east due to the previous global financial crises and the attempt of capitalism to introduce a strategy to divide countries and monopolize their natural wealth and human resources. Terrorism is nothing but an interpretation to those capitalistic strategies. Trade unions have serious tasks to confront all those challenges to reduce the impact of such imperialistic policies.

And in regards  to union freedoms and general public freedoms, participants stressed that union freedoms are an essential part of public freedoms, and that there are numerous violations committed by the government on union rights and freedoms in the past years, such as banning union organizing in the public sector, targeting union activists in the public sector and sending them to courts based on forge revenge accusations , transferring other groups to remote locations far from their homes and families as a disciplinary action for their union activity, other than attacking union offices and closing them such as what happened with the electricity union, also the acts of harassment on unionists by security personnel as the recent incident in Thi-Qar. On top of all that, the government acknowledged only one trade union federation and disregarded all other ones in an act of violation to social dialogue, and many other violations which contributed in undermining union freedoms which eventually reflected on public freedoms in general.

Trade union representatives in this discussion session stressed on the current urging need for setting a unified trade unions strategy based on the interests of workers, and to protect that strategy in all possible ways, and to effectively participate in decision making especially for what concerns economic and social aspects in Iraq due to their direct impact on workers and their families.

Unions re-announced their rejection to privatization programs and policies of structural conditioning imposed by IFIs. They demanded releasing public freedoms and union freedoms in Iraq and expediting the ratification of convention number 87 of 1948, and also legislating the union freedoms and rights law and making sure it’s totally compatible with international labor standards, and as well legislating the two laws of retirement and social security with contents that are in line with the economic and social status of workers, and provide protections from unemployment and other social protections. 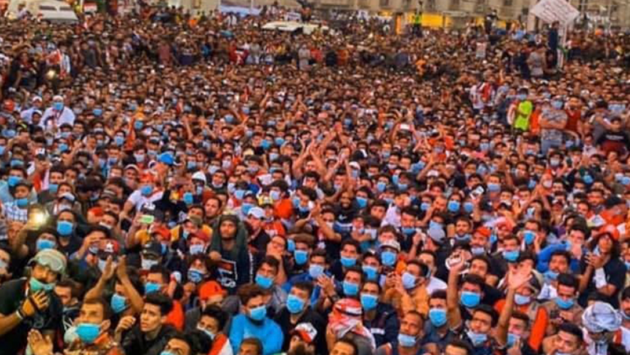