The oil sector employees in Basra called on Mr. Haider Al-Abadi, the Iraqi prime minister, to select a professional and independent Minister to be assigned for the ministry of Oil, and the Employees Committee of the South Oil issued a statement in this regard, stating:

“The employees of the oil sector have followed with great and continuous concern the assignment of the oil bag to someone out of the oil sector as part of the political bids, and the people of this sector were shocked because of that, especially since this ministry and the companies associated to it are the backbone of the Iraqi economy for the time being”.

The Committee considered that the selection of a professional and transparent minister is a fundamental issue that is located in the center of attention of the employees of this sector.

The Committee called on the Prime Minister and asked him to give more attention to the opinion of workers in this sector and to the person who they think is the most entitled and the right to be assigned to fill the bag of the oil ministry in the new government. The statement included the names of three persons nominated by the Committee for the purpose of taking over the functions of the Ministry of Oil.

It is noteworthy that the Iraqi prime minister presented a list of new candidates to run Iraqi ministries, in response to the campaigns of protests by the civil power and Sadrist movement which demanded multiple reforms including breaking the sectarian and ethnic and party quotas base and the formation of an independent and technocratic government. On Wednesday morning, the sixth of April, a group of   the workers in the Southern Oil Company demonstrated in front of the provincial council of Basra, demanding the Prime Minister to assign the Ministry of Oil to a professional, impartial and independent person, from the oil sector to take this ministry out of the political bids.

Abu Watan talked through his speech on the licensing rounds and its harmfulness over oil wealth through the past decade, where it mortgaged Iraq’s oil and its wealth in the hand of the giant multinational companies.

Protesters then moved to the Office of Financial Supervision where they shouted slogans demanding them to prosecute corruption, rather than delaying employees profit payments since 2013. The demonstrators gave the office a five days deadline for the completion of the calculations for employees profit payments, otherwise there will be a sit-in in front of the Financial Supervision office.

It should be noted that the committee of employees of the oil sector are the ones leading these demonstrations in this strategic sector, and that they took the name of “Committee” due to the continuous denial of trade unions work in the public sector in Iraq .

Employees Committee of the South Oil

The General Federation of Iraqi Workers 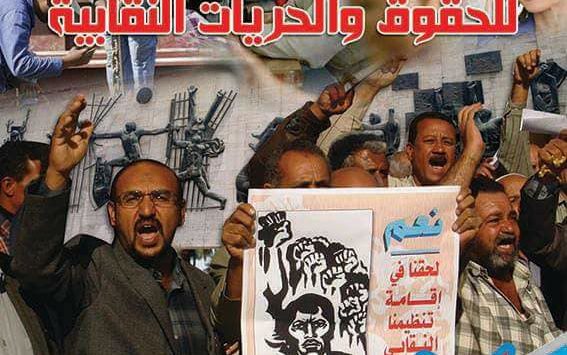