The Iraqi Energy Council 1 has decided to agree on the Higher National Committee of Water’s recommendation (from its assembly on 06 / 10 / 2019), regarding the Makhool dam. They have also recommended the financial and the planning ministers include it in the 2020 Financial Plan. In August 2020, Mr. Mohammed Zaidan, the head of “Azawai” sub district north of “Baji” district in Saladin Governorate, said that there is a special team of water resources, which were discovered during a field revelation on the site of “Sovereign Makhool Dam”. It has been decided to construct on the margins of Azawai, “Almsahag” village, on the borders of “Al Shirqat” district in the north of Saladin, and areas from the “Hawija” district in the Western South of Kirkuk governorate.2

Only a few days have passed and the fear for the future has spread amongst the thousands of families living in this area, as they know very well that the dam will threaten their land and their natural living place, as the work has been pending for years. “Shafaq News”, an online agency, has posted an investigation under the title “Makhool Dam… obliterates 3 administrative districts in 2 governorates and threatens ten thousands of families”.3

In late 2020, the Minister of Water Resources, Mahdi Rasheed Hamdani stated that “Iraq’s need in terms of dams are constructing the Makhool dam in the Saladin governorate”4. However, the Minister didn’t explain to us how he arrived at this conclusion, knowing very well that constructing this dam is not what the SWLRI strategy has previously stated.

At the beginning of 2021, Mr. Hassan Al-Janabi, who is  the past Minister of Water Resources wrote, that he’s against going back to construct theMakhool dam, because he feels it is not a useful project because Iraq does not need more dams. 5

An “Independent” Agency in Arabic posted, according to Mr. Awn Dhiab, a consultant in the Water Resources Ministry, saying that the Planning Ministry gave the green light to resume the construction of Makhool dam, and devoted finances to it in the 2021 budget, which was decided in April of the same year. Mr. Dhiab also points out that “there was a long argument in terms of the safety of its foundations, but we will have procedures to solve the gypsum soil that might be under the foundation before building the dam, so that we don’t make the same mistake with Mosul dam”.6 Less than a week later Mr. Khalid Battal Najim, the Iraqi Minister of Planning  issued a letter of gratitude to Al-Anbar University’s professors and members of the engineering consultant office of the university, “for your special efforts in making the environmental effects study, and updating the two studies of the hydraulic and feasibility of Makhool dam.”7

It has not been made clear when those studies were conducted, nor its results, implying that dam construction will move forward,

And on the 14th of April 2021, the Minister of Water Resources has placed the foundation stone of the dam, alongside the Governors of Saladin and Kirkuk, and the advanced staff of the Ministry8,  and stated that project was done by 100% Iraqi staff, in designing, supervising and implementation.9

The Iraqi Ministry of Water Resources argues that the construction of Makhool dam, which will cost the government budget 3 billion dollars, will add about 3 billion cubic meters of storage capacity to the Iraqi water storage system, and it’s one of the important investing projects that will generate electrical power and add to the national network. They claim it will also protect Baghdad and Samarra from flood danger. This is in addition to the financial and developmental benefits, the spokesman of the Water Resources Ministry has stated will result on many occasions.10

Now, let’s compare what the Ministry of Water Resources has stated, in contrast to the articles of the SWLRI strategy.10

As for the electrical power pretext, the document states: “The hydroelectric power should not be the main source for electricity in Iraq”.12 The point here is to reach a conclusion that is compatible with two important issues. The first issue being to decrease the amount of imported water into Iraq today and in the future and the second issue being the fact that the current electric power projects that Iraq has are facing difficulties to reach the desired power, raising the question as to how it will be possible to build new power stations!

Even when the flood context was implemented, no doubt in the same document, it stated “we can control the flood by fixing the Mosul dam and expanding Samaraa’s water vaults and Therthar canal”. That’s why Iraq will not need any big dams, like the suggested one in “Bekhma”, “Mindawa” or “Al Fathah”, and it re-confirms that “In reality, these inappropriate dams will lose water more than they will gain, due to water evaporation”13 . The document goes on to state “we should only depend on natural depressions to store water. Classically, the lakes of Therthar and Habbaniyah are used as temporary storages to store water outside the current, to run the flow for the two big rivers. For the future, due to the decrease of available water resources, there will not be any water to store except for floods”.14

For a period of time there was some focus regarding the connection between Mosul dam and Makhool dam, in which it’s justified that Makhool dam is an alternative, in the case that Mosul dam (the one with consistent problems) could collapse in its foundation. Yet even this argument does not work out. It’s pointed out clearly in the analysis document, the document that was prepared by International experts which states the following: “if it was not possible to completely rehabilitate Mosul dam to work in the desired level which is 330 m a,s.l, then the second best option is to construct Badosh dam. This option is preferred more that the others, such as Al Fathah or Makhool, which are located in unwanted sites”15. With all of the rejection and reluctance, the decision maker mentions, skillfully and with a sight of hand, to connect the SWLRI strategy and building Makhool dam in one interview!16

While the effort of the Ministry focused on promoting the project, the anxiety runs through the International and local levels of finalizing the dam. On the 9th of December 2021, a group of International researchers launched an inductive initiative to document and protect “Assyria”, one of the UNESCO International heritage sites, because it was endangered to drown, as well as more than 100 culturaley important sites, that would be in jeopardy if the Iraqi government insisted on finalizing Makhool dam.17 In May of the same year, the Committee of the International Heritage took a decision that it is very sorry for Iraq to construct Makhool dam once again, and they requested the Iraqi Government  move or cancel the project due to the fact that it will probably affect the Internationally valuable site of Assyria, which is listed on the endangered International heritage sites lists.18  Mr. Khalaf Al-Juboori, head of the Monument Department in the University of Tikrit, says that about more than 200 heritage sites near Shirqat are in danger of flood. Assyrian sites, that were built mainly from mud, will be gone forever. He also points out what’s called “a social disaster” where thousands of people are facing displacements. And Al-Juboori confirms: “the Government is not listening, not to academics, nor geologists… It’s a very dangerous and a serious matter”.19

Save the Tigris International campaign, sent a message about this dam to the International Heritage Committee of UNESCO, pointing out their concern that the Makhool dam might threaten international heritage sites like Assyria castle and the marshes of the southern Iraq which are threatened to be gone.20 Also, Mr. Majtlid Russeler, the general head of UNESCO, welcomed the message, and confirmed that UNESCO totally agrees regarding the danger of Makhool dam and have been trying to discuss it with the Iraqi government since December 2021.21

For those who think that Makhool dam was selected after the emergence of Little Zab River (a.k.a. The Lower Zab, and it’s the third tributary for Tigris river), and that it is benefitting from the water contribution of this river on the Tigris river, we say that it’s not like this. According to experts Iran, which the Little Zab comes from, has constructed dams and canals on it which will make a lack of water intake. Iraq has an old dam called Dokan dam, and it’s specified to benefit from the Little Zab water in Sulaymaniyah. According to the Minister Al-Hamdani, Iranhas decreased water intake of Dokan dam’s tributaries to 70%22, and Al-Hamdani  pointed out that Iran was trying to redirect Little Zab’s stream in an interview in November 2021.23 He asked how can the Iraqi decision maker can depend on a dying river, wondering isn’t it more of a priority to construct a new dam, maintaining Dokan dam water intake and protecting Little Zab river which expected to be gone soon!24

The best way to close this part, is by pointing out the fact that the SWLRI strategy, has set the most important urgent architectural work that Iraq needs, naturally, these actions are not related to building new big dams but are important interventions; we quote the following:

“The main structure of water management must be rehabilitated. Rehabilitating Mosul dam, expanding Samara’s water vaults and its discharge canal, and “Al-Arweha” and “Al-Bidaa’” canals (sweet water canals), to maintain Tigris River water stream”.25 And these are the most important and urgent civil engineering projects.

1 The ministry assembly for energy, decision number 13 for the year 2020, approved by the signature of Mr. Ihsan Abd Al-Jabbar the minister of oil, 9/7/2020.

2 A topic that was posted on the online newspaper “Shafaq News” on 19/08/2020 with the title “To save two thirds of the country from drought… Iraq is building a large dam on Tigris” https://shafaq.com/ar/مجتـمع/لانقاذ-ثلثي-البلد-من-الجفاف-العراق-يشي-د-سدا-عملاقا-على-دجلة

8 The news were posted on the ministry of water resources website, in the following link https://mowr.gov.iq/2021/04/14/وزير-الموارد-المائية-يضع-حجر-الاساس-لم/

11 A literal translation from English (orignally written in Arabic) to what was written in the document which is (Iraq: Water Resources Planning And Investments Analysis) Page No.8

20 Message text in English, Save the Tigris website 19th of May 2021 https://www.savethetigris.org/letter-from-save-the-tigris-to-the-unesco-world-heritage-centre-on-ashur-the-ahwar-and-makhoul-dam-civil-society-concerns-and-requests/

22 Nass News website, Topic Title: “An urgent meeting after the decrease in water intake for Tigris and Euphrates Rivers in Iraq”, Posted on 11/5/2021 https://www.nasnews.com/view.php?cat=60131

24 The head of Dizza Castle water, Mr. Mohammed Hussain, said “that in 2030 there will not be something called Little Zab”. مخاوف من اختفاء الزاب الصغير في 2030| رووداو.نيت (rudawarabia.net)25 Literal Translation from English to what was mentioned in the same document (Iraq: Water Resources Planning and Investments Analysis), page No.7 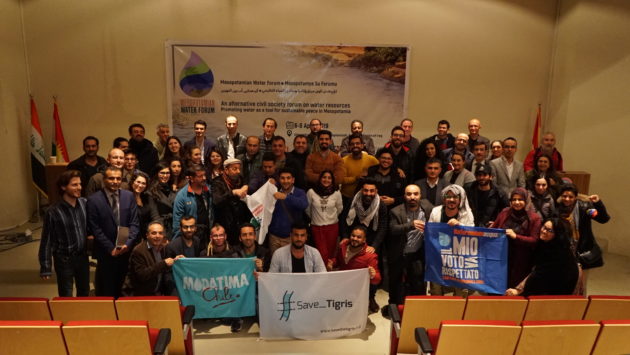 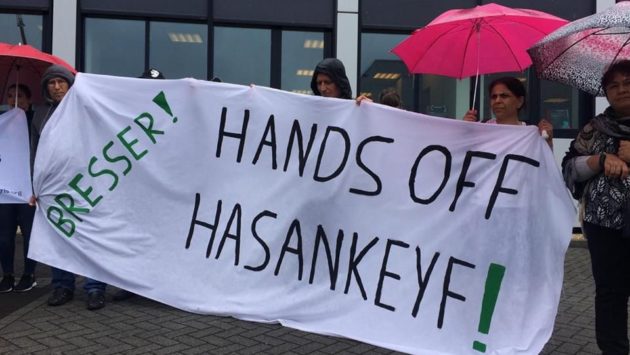 Protest against Bresser at its Dutch Headquarters: Withdraw from Relocation of Hasankeyf Monuments