A rocket attack on a US base in northern Iraq is putting pressure on the Iraqi government and challenging the Biden administration’s policy in Iraq.

ERBIL, Iraq — At exactly 9:30 pm local time on Feb. 15, several rockets were launched on US coalition forces located inside Erbil’s international airport from the southern of the city.

The attack targeted the US coalition base in the northern Iraq city, killing a civilian contractor and injuring eight others.

The rocket attack was the deadliest in almost a year and follows a series of similar events that occurred last year, including several attacks on the US Embassy in Baghdad.

The last time a US-affiliated contractor was killed was in late 2019 when missiles struck the K1 military base in northern Kirkuk, which houses coalition forces. That attack led to more violence, including protesters from the militias attacking the US Embassy in Baghdad and then the US assassination of Iranian top commander Maj. Gen. Qasem Soleimani by drone strike.

A newly formed pro-Iranian militia named Saraya Awliya al-Dam (Guardians of Blood) claimed responsibility for the Feb. 15 attack in a statement that read, “Your men in the Awliya al-Dam Brigades managed to carry out a qualitative operation against the American occupation in our beloved north, as we approached the occupation base (Al-Harir) in Erbil.”

The militia vowed that “the American occupation will not be safe from our strikes in any inch of the homeland, even in Kurdistan, where we promise you other qualitative operations.”

Indications are that this militia is only a new front of Asaib Ahl al-Haq (AAH), which is trying to show itself as the most powerful Shiite militias among the Popular Mobilization Units, pushing other factions to follow its lead.

AAH leader Qais al-Khazali had threatened the Kurdistan Regional Government previously that his group would attack US bases everywhere in Iraq, including in the north.

AAH militia members also gathered in the Karrada district of Baghdad last December, attempting to flex their muscles after one of their prominent commanders known as the engineer of rocket attacks — Hosam Azerjawi — was arrested by the Iraqi government. This was after the last attack on the US Embassy in Baghdad, also in December. The attacks stopped following Azerjawi’s arrest.

Coalition spokesman Col. Wayne Marotto confirmed via Twitter that 14 “107 mm rockets” were launched toward the US coalition base in the Erbil attack. Three of them landed inside the military base; the rest landed in the neighboring residential areas.

Prime Minister Mustafa al-Kadhimi said during the Cabinet session on Feb. 16, “The terrorist act aims to create chaos and shuffle the cards, but we have directed an investigation be opened to identify and arrest the criminals.” Kadhimi pointed out that “security forces have detained the gang members (death squads) that killed a number of citizens, including activists and media workers in Basra,” adding the government is moving forward in this direction and the spilled innocent blood will not be forgotten.

President Braham Salih said in a Tweet, “We have no choice but to root out the forces of terror and the attempts to plunge the country into chaos … it is the battle of the state and sovereignty against terrorism and outlaws.”

Kurdistan President Nechirvan Barzani condemned “in the strongest terms tonight’s rocket attacks on Erbil” and tweeted that he has “instructed security services to start a full investigation and spoke to PM [Kadhimi] on ways to cooperate and identify the outlaws behind this terror attack.”

US Secretary of State Antony Blinken said the United States is “outraged by today’s rocket attack in the Iraqi Kurdistan Region” and pledges support to “investigate and hold accountable those responsible.”

Although the militia claiming responsibility for the attack seems to be pro-Iranian, spokesperson for Iran’s Foreign Ministry Saeed Khatibzadeh quickly moved to reject any suggestions that it had links to Iran or Iran-backed groups, condemning any terrorist attack within Iraq. Khatibzadeh told state media that “while these rumors are strongly denied, the suspicious attempt to attribute it to Iran is also strongly condemned.” He then stated that “Iran considers the stability and security of Iraq a key issue for the region and its neighbors and rejects any action that disturbs the peace and order in [Iraq].”

However, the Kurdish counterterrorism service published photos of missile platforms showing the 107 mm Iranian-made rockets known as Fajr 1 missiles with a range of 8 kilometers were responsible for the attack.

It could be that the attack, which has occurred less than 10 days after US President Joe Biden said he will not unilaterally lift sanctions against Iran, may be intended to deliver a message to the United States that Iran is running out of patience. 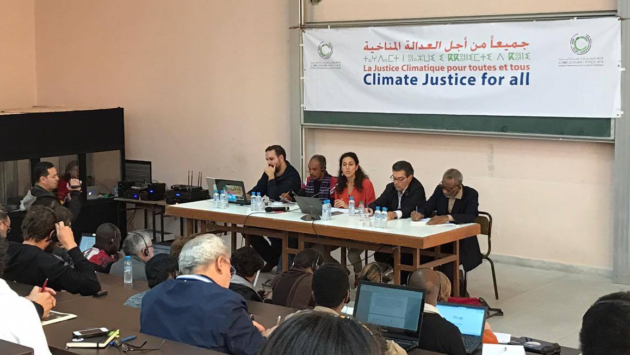 Save the Tigris, Euphrates and Marshes from climate change and unsustainable water policies: a message to the COP22