For the first time in our ten-year history, the ICSSI meets in Baghdad—how wonderful!

The first time I was in Baghdad was almost exactly 16 years ago. I came with other Americans who hoped that if we went home and told the stories of Iraqi citizens and how their lives would be devastated by war, we could help to stop our country’s invasion of Iraq. It was a difficult mission. Saddam Hussein’s government minders controlled our every move. We were not free—and clearly Iraqis were not free either. But even given the restrictions they lived with, I was positive that the Iraqi women and men I met had the vision, the will, and the commitment to change their country.

I am deeply sorry for what my country did to Iraq; sorry that no matter how large our anti-war protests were we could not prevent war. But today, it is more clear than ever to me, just how effective the youth and the women and the men of Iraq are at building a better future for themselves. It has been an incredible joy to stand in solidarity with some of the tremendous change that is taking place.

I wanted to start with a bit of personal reflection, not because my story is particularly important, but because I think it is important for each of us to recognize that SOLIDARITY is a personal choice—and at its heart are the personal connections we make along the way, that build our solidarity initiative into a more powerful and sustainable effort.

I WILL PROBABLY RECOGNIZE SOME INDIVIDUALS IN THE AUDIENCE.

When the ICSSI was launched in Rome, in 2009, Iraq was still in the midst of war, occupied by U.S.-led coalition force. That meeting, taking place outside of Iraq, gave Iraqi civil society activists—trade union leaders, women’s rights activists, advocates for a free press—an opportunity to meet with their colleagues from other parts of the nation, and to discuss the challenges that activists working on different issues faced in common: How would Iraqi civil society build a free, sovereign and democratic Iraq? And how could internationals build alliances with Iraqi civil society activists and organizations? Internationals left with a commitment to work from outside Iraq to advocate with their governments, and with international organizations to have the Iraqi government pass an NGO law that would make independent civil society in Iraq possible.

The following year, in Paris, and then finally in Iraq for ICSSI meetings in Erbil (2011) and Basra (2012), a growing number of Iraqis and internationals worked together to identify the critical issues that Iraqis were focused on advancing. These were, most importantly, political and economic reforms with a potential to make fundamental change through nonviolent means—workers’ freedom to organize; addressing poverty and unemployment; protecting women’s and minorities’ rights; freedom of expression and freedom to protest nonviolently.

At the same time, participants were inspired by the growing power of Iraqi social movements, and especially the passion and energy that youth were bringing to those movements to transform Iraq where the politicians had failed.

In March of 2013, a number of us traveled to Tunis for that year’s World Social Forum and we were inspired by the energy and hope unleashed by the Arab Spring.

2013 was truly a landmark year for Iraqi civil society, as the 1st Iraqi Social Forum took place in Baghdad, one of the earliest goals of the ICSSI. With more than 3000 participants, the ISF was the largest national social forum ever in the Arab World. The ISF included more than 140 activities, organized by over 150 Iraqi organizations. It provided an open space for discussion and dialogue among Iraqi activists from many sectors of society on a wide variety of issues, and helped to create new ties and partnerships between Iraqi civil society and organizations abroad.

The ISF did not just proclaim that “Another Iraq is possible”, but clearly demonstrated that there was great energy and enthusiasm among Iraqi citizens to reform Iraq and promote dignity, democracy and a robust, engaged civil society. Connections established at the ISF were strengthened the following year when Iraqis attended the 2014 Norwegian Social Forum and held a strategic planning meeting between the ISF and the ICSSI in Oslo.

By 2016, the ICSSI and the ISF were addressing a growing number of issues:

And in the face of the devastating assaults by Daesh in Iraqi Kurdistan and the western provinces of Iraq, the ICSSI launched its newest path:

We have prepared a timeline of ICSSI activities that you will all be receiving by email and I hope that you will spend some time reviewing all the details, and please share what you learn with your colleagues, wherever you are from.

The tremendous growth in Iraqi initiatives made it clear that the ICSSI needed to engage in some focused analysis and strategic planning, which we did Istanbul, in February of 2016. The outcome of those extraordinary days of hard work, was a three-year vision for each of the Iraqi paths or Massarat. The Iraqis also made clear to internationals the huge impact that current problems in their country were having on their work: especially, lack of security, which the government was using to shut down civil society; corruption and financial crisis; women denied opportunities to play meaningful public roles; a “lost generation”, age 20-30, who have given up on politics, the government, and even civil society because of corruption; and finally, and most critically, destruction of the environment and a growing lack of water.

These challenges, especially corruption and lack of government provision of basic services (including education, electricity and water), and severe environmental degradation that has produced a full-blown water crisis in much of Iraq, were central to the massive and sustained civil society protests that began in Baghdad and swept the country from Sulaymaniyah to Basra, from 2015 to the present.

The meetings of the ICSSI in Sulaymaniyah, in January and December of 2017, and the launching of the first Kurdistan Social Forum [KSF], also in December of 2017, highlighted the ongoing need to strengthen and further develop solidarity between Iraqis and internationals, and among activists and social movement from all parts of Iraq and Iraqi Kurdistan. Sulaymaniyah was at the heart of nonviolent struggle for social justice in Iraq and the region, with city employees living without salaries while the administrative and financial corruption carried out under the rule of political parties in the Kurdistan Region threatened welfare and life in the region. At the same time in Baghdad, nonviolent protesters were opposing corruption, sectarian quotas, and extremism, while striving to establish a democratic, civic state in Iraq, with experts and professionals overseeing critical government function. Supporting these civil society goals under Iraq’s new government is greatest importance.

That is the work we are here to do, together!

In conclusion, I would like to raise up four important lessons, I have learn from being an activist in U.S. and from the 10 amazing years that I have worked with the ICSSI: 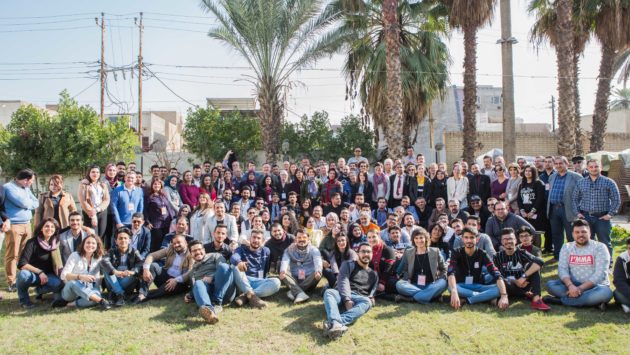