Iraq’s parliamentary elections set for May 12 will indirectly decide on a new prime minister and president. Iraqis will head to the polls on May 12 to elect a new national parliament, which will serve as the basis for the formation of a new government.

The polls will mark Iraq’s fourth parliamentary elections since the 2003 US-led invasion that removed Saddam Hussein from power.

Many parties have taken the opportunity to emphasise a unified, cross-sectarian national identity in the run-up to the vote after elections four years ago which came at a time when Iraq was plagued with some of the worst sectarian violence in recent history.

But unlike in 2014 and 2010, when large coalitions encompassing a wide spectrum of political groups ran, the 2018 election landscape is splintered by intra-sectarian divisions and fragmented Shia, Sunni and Kurdish factions.

Why is this election important?

The parliamentary elections will serve as the first national referendum since the defeat of the Islamic State of Iraq and the Levant (ISIL, also known as ISIS) in 2017.

With few exceptions, electoral coalitions are dominated by the same players who have commanded the political scene since the 2005 election.

What significant changes there are relate to the most dominant political force in Iraq, the Shia parties, which ran as a single group under the United Iraqi Alliance in 2005.

Today, Shia factions are divided into five coalitions, their fractured nature indicating that the government formation process will be long and complex.

According to a nationwide poll conducted in March and featuring respondents from across all 18 of Iraq’s provinces, the top issues of concern include security, job opportunities, and the economy.

How does the process work?

The elections decide the 329 members of the Council of Representatives who will, in turn, elect the Iraqi president and prime minister.

A total of 6,990 candidates from 87 parties are competing against one another, with nearly 2,011 female candidates who are guaranteed 25 percent, or 83, of the seats. Nine seats will be allocated to minorities.

The main lists can be divided into Shia, Sunni and Kurdish coalitions, with Shia parties being the most prominent due to their greater influence over Iraqi politics since 2005.

Candidates elected based on their position in the party will be elected to four-year terms in parliament.

What are the main Shia factions?

The next prime minister of Iraq will be chosen from among the five main Shia factions. That candidate will, in turn, determine the fate of Iraq’s national unity.

Incumbent Prime Minister Haidar al-Abadi will run for re-election as the head of the Nasr Coalition (Victory of Iraq), its name capitalising on his government’s victory over ISIL in 2017.

Both leaders are politicians from the Dawa Party, which fragmented after al-Abadi’s 2014 appointment as prime minister due to a power struggle which emerged with his predecessor, al-Maliki.

Two of the other main Shia factions are splinter groups of the Islamic Supreme Coalition of Iraq (ISCI) which had previously been Dawa’s main rival.

The first of these is the Fatah Coalition (Conquest) led by Hadi al-Amiri. The faction acts as an umbrella for traditionalists of the ISCI and groups affiliated with the Shia militia groups of the Popular Mobilization Units (PMUs).

The other group is the Hikma Coalition (Wisdom) led by Amar al-Hakim, who formed it in July 2017 to attract a younger electorate from the ISCI.

The fifth faction is al-Sairoon (The Marchers) which brings together the Sadrists – followers of the religious leader Muqtada al-Sadr – and the Iraqi Communist Party. The coalition has pushed an anti-corruption and anti-sectarian campaign.

The Kurds played a decisive role in the selection of the prime minister in 2010 and 2014.

But with instability in the Kurdish region of Iraq since the 2017 independence referendum, which resulted in the Iraqi military seizing control of disputed territories such as Kirkuk, the Kurds have become divided and are unlikely to have a substantial impact on the formation of the new government.

“As a result of the referendum and fiasco that ensued, the Kurdish vote is more fragmented today than at any point since 2003,” said Fanar al-Hadad, a research fellow at the Middle East Institute, National University of Singapore.

“This gives Baghdad much more leverage when dealing with the KRG. It’s not going to be Baghdad dealing with KDP and PUK any more. Those days are long gone.”

While the Kurdish Democratic Party (KDP) has remained intact, “it will [likely] suffer for its leader Masoud Barzani’s failed push for independence for Iraq’s Kurds,” said Ibrahim Marashi, associate professor at the Department of History, California State University, San Marcos.

At the same time, the Patriotic Union of Kurdistan (PUK), which has suffered internal strife and splintering, “for failing to wholeheartedly endorse this effort and its tacit role in allowing the oil-rich city of Kirkuk to revert back to Iraqi government control” will also most likely lose votes, he said.

These divisions have spawned a number of smaller parties which will also be running in the elections. They include Goran (Change), and more recently the Democracy and Justice Party led by former senior PUK official Barham Saleh, and the Kurdistan Islamic Group – also known as Komal – led by Ali Bapir.

What is expected of the Sunni vote?

While the traditional Sunni leadership has long been divided, it faces unprecedented challenges to its legitimacy in this election.

Sunni leaders have coalesced around two primary lists, one of which is al-Qarar al-Iraqi, led by Osama al-Nujaifi, one of Iraq’s three vice presidents and his brother, Atheel al-Nujaifi, governor of Mosul. This group includes members of the Mutahidoon (United) Alliance and the Arab Project led by Sunni businessman Khamis Khanjar.

The other is the Wataniya Alliance represented by Salim al-Jabouri, the current speaker of parliament, and Saleh al-Mutlaq, former deputy prime minister and former prime minister Iyad Allawi’s secular coalition.

According to Marashi, “Arab Sunni parties have failed to agree to run under a single list for 2018… [which is] indicative of the failure of one party that will represent their aspirations.”

Analysts expect that voters in Mosul and other Sunni-dominated provinces will more likely vote for al-Abadi’s Nasr coalition.

“The country has just overcome ISIL which has affected the way voters see the election. Everyone is hoping for change, and they see Abadi as a possible force for that change because of his victory over ISIL,” said Ahmed Tariq, an Iraqi professor of international relations at Mosul University.

According to the recent nation-wide poll, 79 percent of the Iraqi people accept al-Abadi as prime minister. Nearly 90 percent of respondents in liberated provinces saw his leadership as favourable.

Al-Hadad agrees that a Sunni vote for al-Abadi is quite likely.

“Abadi has set a precedent as the first coalition to campaign in all 18 provinces of Iraq including the Kurdish ones. That will have a positive impact,” he told Al Jazeera.

What is expected after the vote?

The vote will be followed by bargaining and alliance formation among the coalitions, including for the post of prime minister.

Al-Abadi as prime minister may appease Iraq’s Arab Sunnis who see him as less sectarian and more responsive towards Sunni needs than al-Maliki or al-Amiri are likely to prove.

But this outcome might upset the Kurds who opposed al-Abadi’s tough stance following the independence referendum.

Experts envision, however, that even if al-Abadi wins a second term, most of the main Shia coalitions will also be represented in government.

This is especially true for al-Amiri’s Fatah Coalition which has closer ties than the Nasr Coalition does with Iran, a country that plays a large role in Shia politics in Iraq.

“The Fatah Coalition [represented by al-Amiri] will inevitably be a part of the coming government. It’s a question of how big a chunk of the political pie they will have,” said al-Hadad.

Possible scenarios after the vote are therefore dependent not only on the number of votes received by the candidates but also on Iran’s role and its ability to pressure Shia coalitions into forming alliances.

The most ambitious scenario assumes that Iran will pressure Shia groups into a post-election alliance between at least four of the Shia coalitions. This would require minimal support from Sunnis or Kurds to achieve an overall majority in parliament. However, most observers see that this as unlikely.

Negotiations would also have to factor in the US role. In the past, the prime minister of Iraq had to be acceptable both to Iran and the United States, but this time it is unclear what US input will look like. 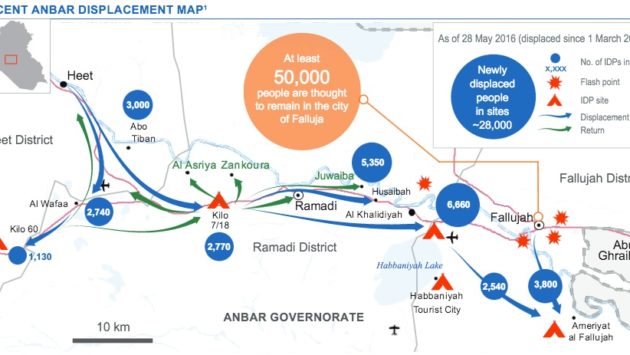 Statement on Iraq and Falluja by UN OCHA