Each year on the International Day of Peace, 21 September, the UN invites people across the world to take part in celebrations which bring together civil society and citizens from all over the globe.  This year in Iraq, youth came together across 9 different locations for celebrations organized by the Iraqi Social Forum, its subsidiary local city fora, and associated organizations as part of the project “Paths of Coexistence in Mesopotamia and the Middle East”. Events took place in Baghdad, Sulaymaniyah, Hit, Ramadi, Falluja, Najaf, Maysan, Kut and Babylon. People sent letters of peace and solidarity between their cities, fostering a sense of unity and hope among Iraqis throughout the country under the well-known Iraqi Social Forum slogan  ‘Another Iraq is Possible’.

In Baghdad, the City of Peace, youth from the Iraqi Social Forum celebrated International Peace Day by sending letters to other Iraqi provinces and cities. They worked hard to coordinate all the other celebrations in different Iraqi cities, spreading visions of peace and the rejection of violence to all the people of Iraq.

In the city of Hit, a group of local volunteer groups organized an event at the Shakoufyan Cultural Center, organized by the Shakoufyan Initiative. Many young volunteers participated in this event, including many children. The event included a short speech by Ahmed Salam, one of the volunteers from the Shakoufyan Initiative. He reflected on the importance of this day, and the values ​​represented by the celebration. These values, he said, extend beyond Hit and its residents, and have created a special opportunity to send messages calling for peace within all cities of Iraq. The activity focused on solidarity with the city of Nasiriyah, and the victims of the recent terrorist attacks there. At the conclusion of the event, participants wrote still more messages on a panel entitled “Messages from Hit to Nasiriyah”. Their words were full of love for and solidarity with the city, and the hope is that the panel will be displayed there.

The celebration in Kut involved a tour of the city’s neighborhoods led by young people carrying letters and slogans of peace sent from the people of the city to all cities of Iraq. Residents of the city joined in, welcoming the youth and encouraging them to spread peace throughout the country.

The city of Falluja celebrated World Peace Day in two stages. In the first, a group of young residents began to paint a big slogan for peace on one of the main streets of the city, expressing the love of peace felt by the people there. The next day, the youth organized a big festival, entitled “Falluja Peace Lights” in which multiple peace messages were sent to different cities in Iraq.

Here, the “Ishtar Read” team launched balloons representing love and peace into the sky carrying the messages from the people of Babylon to other Iraqi provinces, with hopes that feelings of unity and brotherhood would prevail among all the Iraqi people. Throughout their celebration, they emphasized the role of the youth, who seek out such activities to promote a culture of peaceful coexistence and the rejection of violence. Youth volunteers see these campaigns as playing a key role in raising a new generation of ‘flower children’ embracing the value of love and refusing hatred and intolerance.

The participants in the celebration expressed their joy and gratitude for what the youth of Babylon are doing, and voiced their hope that the country would continue to implement similar initiatives in which the love of all the Iraqi people might be made manifest, along with a wish for security and safety for all people in the country.

The youth of Najaf opened a special stand on one of the main streets of the city, which attracted a large number of Najafian people. At the stand, people were able to send messages of peace to others in Iraq, and to explore several publications calling for peace.

Ramadi witnessed the organization of “Bazaar Noon”, which was dedicated to supporting groups of people affected by terrorist attacks. Like many other celebrations in the country, the event in Ramadi also launched messages from citizens expressing peace for all. The youth lit candles and then stood together to form the peace sign, expressing their love for their city and their desire for peace in all Iraqi cities.

In the city of Amarah, activists toured the city, carrying slogans of peace meant for the cities of Mosul, Anbar and Tikrit, expressing their solidarity with the towns liberated  from Daesh, and their concerted efforts to see all Iraqis to live in peace and brotherhood.

Sulaymayniyah youth also had their share of solidarity activities planned on this important day — activists sent a group of solidarity messages sent from Sulaymayniyah Kurdistan to the rest of Iraq’s beloved cities, which carried slogans of brotherhood among the different nationalities of Iraq. 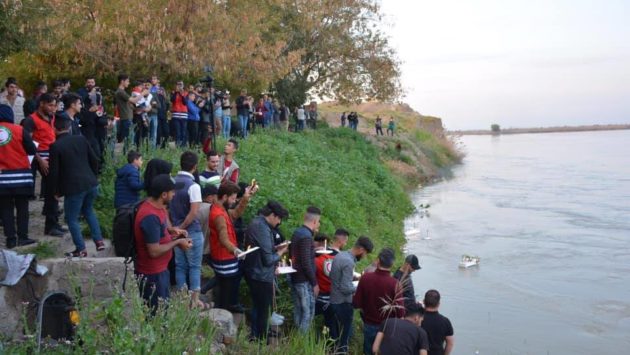 Standing in Solidarity with the Victims of the Mosul Ferry