This week, a group of protesters demonstrated near the Iranian Consulate in Sulaymaniyah. Their issue: Iranian dams that have stemmed the water flows to the Kurdistan Region. The particular reason is the construction of the hydro-electric Sardasht Dam in Iran. Starting from June 23 2017 this Dam had lead to a reduction of 80% in the water flows of the Little Zab, a tributary of the Tigris River, to the Iraqi-Kurdish town of Qaladze. This Iranian Dam could affect even Kirkuk and regions further south. In conjunction with the Sulaymaniyah protests, activists in Kirkuk held a demonstration as well.

The move of Iran is oddly timed, considering that at the same in Tehran the International Conference on Sand and Dust Storms took place where the President of Iran, Hassan Rouhani, said the region is a ‘family’ and should solve the problems caused by dam construction together. In fact, this is not the only Iranian Dam that is affecting the Little Zab River in the Kurdistan Region of Iraq. Garan Dam, completed in 2013 near Marivan in Iran, has already impacted Lake Dukan and Lake Darbandikhan in Iraq. The city of Sulaymaniyah is dependent upon Lake Dukan for drinking water. In addition, the Daryan Dam on the Sirwan River (another tributary of the Tigris) is set to have a huge impact on the border region in Halabja and Diyala Region in Iraq, while further south Hawiza Marsh has already been severely affected by man-made embankments on the Iranian side of the Marsh.

These dams are often objected to as not compliant with moral values, by protesters (see above picture) as well as by KRG officials (“lacking in human, Islamic or neighbourly values” as the Kurdish Minister for Agriculture Abdulstar Majid said). Paradoxically, while objecting the construction of dams in neighbouring countries, the Kurdistan Regional Government (KRG) continues to construct a large number of dams within its own borders, with the aim of storing water for irrigation and drinking. 17 dams to be exact, with most of them completed. Note that the KRI already has 2 dams on the Little Zab which were built in the 1960s. The impact on the rest of Iraq is already visible: In response to the Sardasht Dam and the reduction of water flows from Iran, the KRI in the past week reduced water flows to Central and Southern parts of Iraq. Majid explained that he does not want Iraqis to suffer, but that the KRG was ‘forced’ to resort to this measure in order to safeguard drinking water for its own region. Majid said that the KRG, in response to Iranian (and Turkish) dams is likely to decide to store more water during autumn and winter, which implies Central and Southern Iraq would receive even less water. It is alleged that the KRG notified Iraqi officials, urging them to get involved and address the issue of reduced water flows with Iran. Iranian Dam construction could lead to an environmental disaster in Iraq’s southern provinces.

Building new dams in response to other dams is not the solution, is now slowly becoming obvious in Iraq too. 2 days after the Sulaymaniyah protests, on 7 July, it was reported that the flow of the Alwand River (Arabic name of Sirwan River) into Diyala Governorate was completely stopped by Iran. Since 2003 this is happening annually in the summer months, with a devastating effect on agriculture in the Iraqi region. To mitigate the cutting of water flows by Iran, The KRG in 2012 completed the Alwand Dam near Khanaqin in order to store water, which would supply local farmers with water for irrigation during the dry months. The director of the dam has now warned that if the river’s water is not released next year, the Alwand Dam will be dry in the summer months since it depends on the waters of the Alwand River coming from Iran. Even the construction of a second dam currently under construction, Qamishanin Dam, will be not be able to provide sufficient water. The only long-term solution is to launch genuine water diplomacy between all the nations of the region. Who will take the lead? 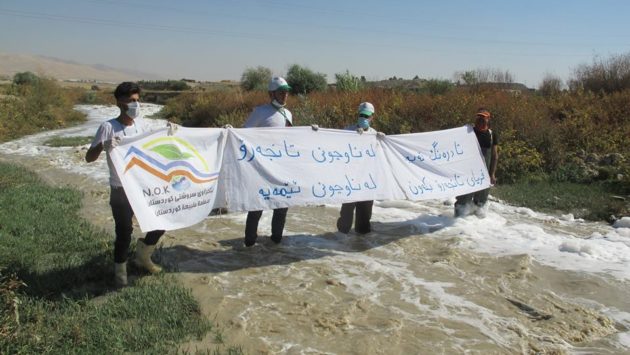