On Friday, 26 May 2017, members of the Conference of Iraqi Federations and Workers Unions [CIFWU], a coordinated network of several trade unions, held a protest in Basra.  Nonviolent protesters gathered to express their opposition to the draft trade union law, submitted by the government to parliament, claiming that it is in direct violation to the Iraqi Constitution, article 22, paragraph 2, and Labor Law No. 37 of 2015. The draft law (written in 2013) also conflicts with established ILO Conventions, in particular the Convention on Trade Union Rights and Freedoms No. 87 of 1948.

The protestors met on al-Farahidi Cultural Street. to wave banners in protest of the proposed law. Mrs. Suad Abdul Aziz, member of the Executive Office of the General Federation of Workers’ Unions in Iraq read the statement issued by CIFWU, clearly stating their opposition, and Abu Watan, president of the General Federation of Workers’ Unions in Iraq (GFWUI), made a speech stressing that the draft law effectively undermines the power of trade unions. He claimed that the law recognizes the right of government to interfere in — and thus potentially dominate — the affairs of trade unions, abolishing their independence. Therefore, he called for the withdrawal of the draft law, and, in its place, the submission of a new one, prepared by the trade unions themselves under the supervision of experts from the International Labor Organization. This new law would maintain the legitimate rights and freedoms of the unions. Watan called for the immediate signing of ILO agreement No. 87, and warned that unions would take concrete steps to protest the Iraqi government if it continues to ignore their demands.

The workers’ unions are not acting alone: international organizations have already sent letters of solidarity, calling on the Iraqi government to withdraw the draft trade unions law immediately, while a number of radio stations, newspapers and satellite channels have covered the nonviolent protests, offering interviews with some participants.

For the statement issued by the Conference of Iraqi Federations and Workers Unions, click here 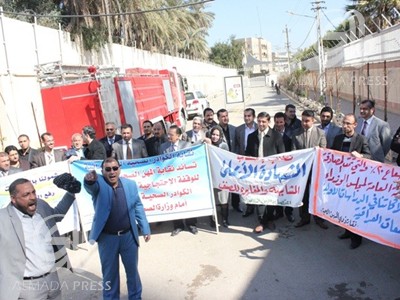 Health professionals give notice to authorities until the end of February to achieve their demands and threatening with “flood ravaging Iraq”!