The people of Ramadi didn’t expect that the same wealthy man who belongs to inveterate and wealthy family will come again to take the part of being the big player in city of Ramadi after it has been liberated form Daesh.

Abd Al-Latif Alhmaim came back lately to take the control of the Sunni Endowment Management, but as it seems he chose the right moment to jump in the danger zone and present himself as the man of the new phase, the phase for returning the IDPs to their original provinces.

Alhmaim, whose name is associated with the faith campaign which was launched by the former regime of Saddam Hussein, didn’t appear in the political field suddenly, even if it was from distance, but he has the help in a several rounds of the argument on partnership between Shiites and Sunnis, until he was classified many times as one of the Sunnis extremist who are originally objects on what is called by ”The Political Process”.

After Al-Abadi took the control of the Prime Minister position, Alhmaim appeared as the extraordinary candidate to take the position of head of the Sunni Endowment, the position that was surrounded with a lot of controversy on its actual role and its former head implication in the suspicions of corruption. Alhmaim quickly took the position, but he seemed smaller than this role to the followers, not many people hide their surprise of Alhmaim acceptance to take this position, but the man as it seems was aware of the importance of achieving a new breakthrough, from a new gate, so he choose this position to present himself as a powerful Sunni partner.

Alhmaim was engaged quickly after he took the position in the political discussions that related to the “future of the Sunni component” and in only few months Alhmaim became a complex number in the political equation that combines the big representatives of the Iraqi component, as soon as the operations of the Ramadi liberation started, Alhmaim took his full part of directing the results on the ground. That was made clear with the decision of the prime minister to give Alhmaim the presidency of the commission for returning the IDPs to their homes in Anbar, which was managed before by the governor Suhaib Al-Rawi, Which launched  a new phase of competition in Anbar, between the traditional political power represented by the Islamic Party represented by the governor and the emerging political power, represented by Alhmaim  and the Electricity Minister Qassim Al-Fahdawi, with a less extent.

During my meeting with some of the biggest leaders of the Islamic party in Baghdad, I heard an assessment that seemed positive about Alhmaim, They told me clearly that he is a key partner in the next phase, and meetings between the two parties is continuing, but the picture on the Ramadi ground seemed very different, the governor Al-Rawi doesn’t seems to be convinced with the decision that was made by Al-Ibadi, where Al-Ibadi has already created a committee previously and it was headed by Al-Rawi and a large number of ministries who are responsible for returning the IDPs and for the reconstruction of Anbar city. The committee gave a ministerial powers for each ministry within the committee which allowed the governor to move at a various levels, but Alhmaim appearance in the scene confused the governor calculations and put him in the corner, so he had no choice only to move on the ground to gain the influence, which forced Alhmaim to visit Ramadi and stay there, which caused indirect clashes between the two parties on whom will gain the decision and influence.

Qassim Al-Fahdawi, the Electricity Minister which was separated from Anbar since leaving the post of governor of Anbar, did not have to stop on the fence between Alhmaim and Al-Rawi, therefore he quickly tended to the first and decided to participate in the clashes, when he  took a large delegation of his assistants and senior ministry staff to Alramadi one week ago, to find Alhmaim, not AlRawi to receive him, and take him in pictorial tour of the areas, to monitor and record the city’s needs, priorities, and how to deal with it.

The type of conflicts are many in Ramadi between the two parties but until now the conflict seems  to be going in a good way, all this lead to some kind of fever on the ground between the field teams which represent each party, regarding the cleaning of the neighbourhoods, opening the closed streets, collecting the needs of the returnees, and opening registration offices to register the names of the people who want to return to Ramadi. All this reflects positive points at the first impression, on the nature of the situation and the people’s interests, but this will not last long.

Alhmaim is playing in smart way by investing the rage of the locals on all matters relating to the Islamic Party and its links to objects of power, to expand his influence area, armed with a wealth of experience of social composition of this small town, while the supporters of the governor are trying to respond by linking the head of the Sunni Endowment to the Iranian project, and it’s a conflict clamour with it all the pages of the two parties supporters.

If the Ramadi was for Suhib Al-Rawi is the strategic manoeuvring space, and his main concern, it seems to Al-Hmaim just a stepping station for a big area for the “Sunni” in Iraq, including requiring reformulation of the scene for “the Sunni leadership” at the national level which seems clear in the attempts of the head of the Sunni Endowment, to form the political attitude in line with the vision of the central government who is seeking for saving the unity of the country and facing  the project of dividing Iraq into regions. However, sources indicate that Alhmaim, may accept the project of “the Sunni region” or “Al-Anbar region” if he couldn’t reject it, which explains his keeping to the balanced relationship with the advocates of this project.

The picture of Al-Ramadi from inside can be summarized now in the unsafe conflict between the man of the money and the amazing gulf relationships Alhmaim, and Islamic party, the owner of the large experience in the local administration, and in building the centres of influence, where the results are open for all possibilities. 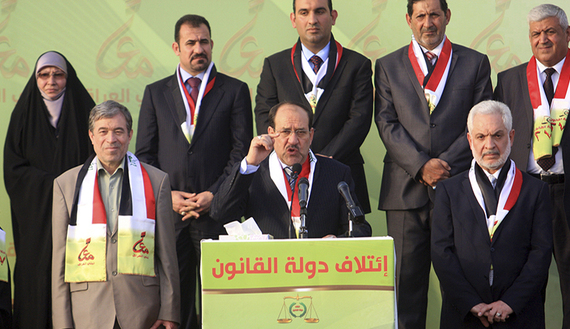