The picnic tables on the mountainside overlooking the town of Sinjar are a vestige of a time when different communities lived side by side in this corner of northwestern Iraq.

That was before Islamic State militants overran the area in August last year, purging its Yazidi population and turning neighbor against neighbor. The town was retaken last week, but the damage to relations between its former inhabitants may be irreparable.

Empty pick-up trucks descend to the town and return laden with everything from satellite dishes to tricycles pillaged from the homes of Sunni Muslims whom Yazidis accuse of collaborating in the atrocities committed against them.

“This is our neighbor’s house,” said a young Yazidi man, tying a set of sofas to the back of a red pick-up truck. “I’ve come to take his belongings, and now I’m going to blow up his house.”

The Yazidi, who wished to remain anonymous, admitted he had no real use for the sofas, but could always chop them down for firewood this winter: “I will warm myself on the fire of revenge.”

Mustafa, the Yazidi’s neighbor, was a Sunni Arab who joined Islamic State and threatened him before the militants attacked Sinjar and surrounding villages in August 2014, murdering hundreds of adherents of the religion they consider devil-worship and enslaving thousands more.

More evidence of the horrors that took place there is now being unearthed. A grave containing the remains of more than 70 older Yazidi women was discovered east of Sinjar over the weekend.

Inside the town, the words “Sunni” and “Yazidi” are scrawled on the doors of houses and corrugated shutters of shops. Yazidis say the militants marked them so they would know which to plunder and torch.

“We only go into the houses marked Sunni,” said another Yazidi from the Sinuni district north of the mountain, whose loot included a meat griller and an armchair.

On a neighboring street, 60 year-old Yazidi Barjis Hassan helped his son drag an entire kitchen unit out of a house.

“All of these people were with Islamic State,” he said. “Our religion says it’s forbidden to take from others, but these things are permissible to us.”

“The Shi’ites can come back but we will not accept the Sunnis. If they come here, we will kill them.”

Yazidi peshmerga Rasho Omer Danai, 54, conceded that not all Sunni Arabs had blood on their hands, but said only two in every 100 were innocent.

Most Yazidis are still living in camps in the Kurdistan region and Danai said they would only return permanently if provided with heavy weapons to defend themselves, and a guarantee of protection from the international community.

Before it was overrun by Islamic State, Sinjar and the surrounding villages were home to about 200,000 people, mainly Kurdish and Arab Muslims – both Sunni and Shi’ite – as well as Christians and Yazidis, a faith that combines elements of several ancient Middle Eastern religions.

Now the town is largely deserted. But in a row of houses used by Islamic State fighters, there were signs of recent occupation: a smell of rotting food, and foam mattresses and pillows laid on the floor.

Blankets are taped over windows from the inside to prevent light leaking out and betraying the presence of its occupants – who had graffitied their names on the walls inside in colored marker pen, as well as “caliph of the Muslims”, referring to Islamic State leader Abu Bakr al-Baghdadi.

A handwritten sign taped to the door of a cabinet reads: “Do not open except by order of the emir”, and beside it are a bag of potatoes and another of TNT.

In a separate room that appears to have been used as an office are remnants of bureaucracy, including a typed list of militants who received a 30,000 Iraqi dinar ($27) stipend, and a register of 142 men participating in an Sharia law course in the Sinjar district.

A stencil used to replicate Islamic State’s emblem has also been left behind.

Recent editions of an Islamic State magazine are strewn on a desk along with several copies of a typed letter enjoining the “brothers in Sinjar” to dig a trench as a defense against air strikes.

The militants had also excavated an underground network of tunnels that enabled them to move around the town undetected.

Declaring victory over the militants in Sinjar, Kurdish leader Massoud Barzani said only the flag of Kurdistan would fly over it, sending a message to the government of Iraq and other factions competing for power in the area.

In reality, an array of flags and acronyms denoting different Kurdish and Yazidi groups decorate the ruins.

The sun-emblazoned Kurdish flag is draped on Sinjar’s tallest building – a grain silo – but smaller banners of rival groups affiliated with the Kurdistan Workers’ Party (PKK) hang alongside it.

The least visible flag is that of Iraq, which has just a token presence atop the mayor’s office.

Iraqi police, all Yazidi, are stationed in a two-floor villa because their own base on the opposite side of the street has been occupied by the PKK, which gained a foothold in Sinjar when its Syrian affiliate rescued thousands of Yazidis stranded on the mountain. The group’s forces in the area include fighters from Turkey and Syria.

PKK leader Abdullah Ocalan’s image flies from a flag pole on a roundabout in Sinjar and posters of Barzani are plastered on the walls.

The staking out of territory raises the prospect of further violence in a town beset by tragedy.

In the headmaster’s office of an boys’ school turned military base, senior Yazidi commander Qassem Shesho said the PKK was not welcome.

“We will not give up Sinjar to any foreign force. I hope they will think carefully so there will not be internecine conflict between us”. 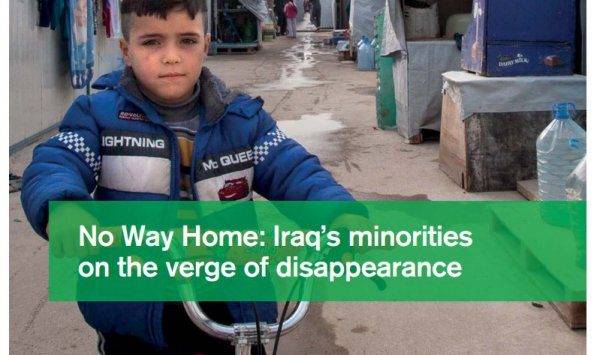 No Way Home: Iraq’s Minorities on the Verge of Disappearance