In Iraq’s northern disputed territories, minor skirmishes, rumours of looting, arson and speculation about political power plays have locals frightened of a new front line near Iraqi Kurdistan. It has nothing to do with extremists, rather it’s about the Iraqi Kurdish military and the increasingly troublesome and lawless Shiite Muslim militias. However recent fighting with the extremist group known as the Islamic State has completely changed this state of affairs. In late November Iraqi Kurdish military and Iraqi armed forces, including the Iraqi army and less official fighting groups, the Shiite Muslim militias, managed to regain the areas of Sadiya and Jalawla near Khanaqin. Both of these areas are disputed territories. Jalawla, for example, had hosted a mainly Arab population before the Islamic State, or IS, group captured it. But Iraqi Kurdistan had also argued that it was a mainly Kurdish town before the 1970s.

According to the latest movements, the Iraqi Kurdish military are currently present only in Jalawla. Meanwhile other parts of the disputed area, including Sadiya, are  being occupied by various Shiite Muslim militias from further down the country, including the Badr Brigade, the League of the Righteous and the Khorasani Brigades. Iraqi Kurdish military sources say these militias are cooperating with the Iran’s Revolutionary Guards, with whom they have close connections.

Iraqi Kurdish military also say that a force from the Khorasani Brigades about 400-strong is in some of Jalawla’s neighbourhoods and members of the Badr Brigades were positioned outside the city.

Some locals have claimed that members of the militias are behaving badly, looting and burning homes and not allowing Sunni Muslim families to return to them. They also suggest that the militias are fomenting unrest in other areas inside the semi-autonomous region of Iraqi Kurdistan, so that local Arabs turn against the Iraqi Kurdish military in charge there. Then again there have also been reports that the Iraqi Kurdish are bulldozing homes owned by Arabs to ensure that they cannot return and claim the territory again.

“These forces are not at all disciplined,” says Jafar Mustafa, who heads the Khanaqin branch of the Kurdish Democratic Party, or KDP. “They’re composed of a diverse mixture of individuals and they don’t fight for the nation, just for their own sect. They don’t take into account a lot of important factors about this dispute.”

An Iraqi Kurdish official from the Diyala province, of which Sadiya and Jalawla are part, agreed. “The Shiite militias are trying to change the demographic composition of this area,” said the official, who could not be named because he was not authorized to comment on the topic. “They are doing this together with Iraq and their refusal to allow Sunni families back into their homes is simply their first step toward this goal.”

“Kurds used to make up about a third of the population in this city before the IS fighters came here,” the head of Sadiya’s administration, Ahmed al-Zarkoushi, told NIQASH. “The Shiites used to make up about 10 percent and the Sunnis were the majority here. But today they are unable to return to their homes in Sadiya,” he concluded.

Despite the presence of the Shiite militias and the various rumours about their wrong doing and motivation for being there, a representative from the Ministry of Peshmerga (the Iraqi Kurdish military) told NIQASH that presently they were not worried. “The Shiite militias came into the region, in coordination with the official Iraqi army and they do not pose a threat to the region or to its inhabitants,” says Jabbar Yawar, the official spokesman for the Iraqi Kurdish military.

“The Shiite forces have been coordinating with the Iraqi Kurdish military and in fact, they have helped to rescue Iraqi Kurdistan from the threat presented by the IS group,” Sherko Mirwais, who heads another major Iraqi Kurdish political party, the Patriotic Union of Kurdistan, or PUK, in Khanaqin, told NIQASH.

Then again it is also worth remembering that as a party, the PUK has long had good relations with neighbouring Iran, a Shiite-Muslim-led theocracy – in fact, far better than the relationship the KDP has with Iran; the KDP is closer to the Turkish. Some of the places where the Shiite Muslim militias have set up are considered centres of power for the PUK.

“It’s not like these militias arrived from another planet,” Mirwais continued. “They too are sons of Iraq.”

Some other political observers have suggested that in fact the Shiite Muslim militias will only remain in the disputed territories as long as Iran wants them to. The goal of the Iranians in this case is to use the disputed territories as leverage. Their long term aim is to even up the population in the territories so there is a more even split between Sunni Muslim Arabs and Shiite Muslim Arabs. If there are more Shiite Muslims in areas close to Iraqi Kurdistan, the Iranians will also have more influence on Iraqi Kurdistan – or so the speculation goes.

One thing is for sure though. The areas of Jalawla and Sadiya have always been potential conflict zones because of their location – they link the province of Diyala and Kirkuk and each of Iraq’s main military groups has tried to control them in turn. Some Iraqi Kurdish now fear they are going to have to fight the country’s Shiite Muslims as well as the radicalized Sunni Muslim ones belonging to the IS group.

“If these armed militias don’t eventually withdraw, we may need to fight them to keep them away from Iraqi Kurdistan,” repeats Mustafa, echoing the concern a lot of locals are already feeling, no matter which stories about political power plays, looting and arson they choose to believe. 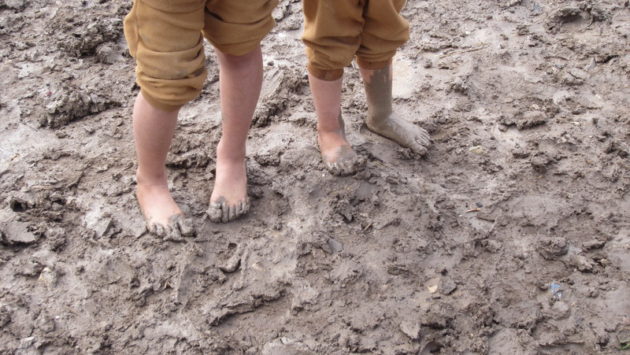