For three days, a group of Iraqi and international civil society activists met in the Norwegian city of Oslo to discuss the current crisis in Iraq. They came together to build international solidarity with civil society in Iraq in order to promote the far-reaching political and social reforms that are essential to confronting the root causes of violence and extremism. The meeting took place in the context of a rapidly deteriorating human rights situation in Iraq. The recent invasion and occupation of the city of Mosul and of significant other parts of Iraqi territory by Daaesh [the so-called “Islamic State in Iraq and al-Sham” or ISIS] and the brutal crimes these extremists are committing – crimes against humanity including kidnapping, slavery, rape, and genocide – have focused international attention on Iraq’s security crisis. Daaesh’s violence has produced a devastating humanitarian catastrophe as thousands have fled their homes and communities, and become internally displaced persons and refugees. A delegation of 15 Iraqi women and men representing a broad spectrum of civil society organizations traveled from Iraq to engage in discussion and dialogue with Iraqis currently living outside Iraq and with over 30 international activists from around the world, the global South as well as the North. The goal of their dialogue was to share information about the ongoing crisis in Iraq and to plan solidarity efforts by which the international community can support Iraqi activists’ work. The Iraqi delegation was organized by the Iraqi Social Forum (ISF) whose meeting in September of 2013 in Baghdad brought together over 3000 Iraqi participants – primarily youth, human rights activists, women activists, and trade unionists – to propose alternatives to war and violence, visions for a sustainable peace and the reconstruction of their country. This was before the crisis in Mosul.

In Oslo, the Iraqi delegation and the internationals agreed together upon the priorities and objectives of the campaigns that the Iraqi Civil Society Solidarity Initiative [ICSSI] would work on over the next two years. These objectives were presented and discussed in thematic workshops that focused on each of the major campaigns being coordinated by Iraqi organizations and the ICSSI:

Workers’ Rights and Freedom for Trade Unions to Organize

Sports Against Violence and Baghdad Marathon

Save the Tigris River and the Iraqi Marshes Campaign

The Campaign agrees to develop and strengthen its strategy in two dimensions: 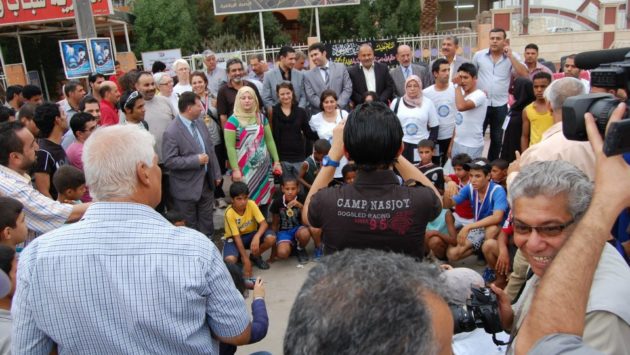