By the Iraqi Civil Society Solidarity Initiative – May 18, 2019.

Forming a government, following the recent parliamentary elections in Iraq, will take time, but there is now hope for significant change and reform. The strong showing of the Saeroun Lil-Islah (“Marching for Reform”) alliance, which won 55 seats in the parliament, was a clear endorsement for ending government corruption by the appointment of qualified technocrats to head government agencies and refusing to award ministries on the basis of sectarian quotas.

The alliance, whose optimistic slogan is “To Build a Civil State, a State of Citizenship and Social Justice,”brought together communists, business leaders, and religious community activists under the leadership of the Shiite cleric Muqtada al-Sadr. Saeroun’s victory was a direct outgrowth of the massive protests that have taken place in Iraq, every Friday, since 2015. It was in the streets that activists learned to come together and build the alliances to inspire a new, non-sectarian, national project.

Jassim al-Helfi, president of a civil society research center in Baghdad, a leader of the Iraqi Communist Party, and one of the principal organizers of the Friday demonstrations, told the ICSSI that in 2015 the Iraqi civil society activists who launched the anti-corruption protests decided intentionally to open the protests to followers of Muqtadaal-Sadr. Many criticized this choice, accusing al-Helfi and others of having sold out to the Islamists. But the activists realized that only that Shiite movement would bring the poorest members of Iraqi society into the protests. This was vitally important, as a second major goal of the protests was government provision of basic services.

In April of 2016, when thousands of protestors broke into the government’s Green Zone, climbing over walls and fortified cement barricades, the people understood corruption and privilege in new terms: they saw drinkable water used for flower beds, fountains that ran continuously, lights that burned 24/7—meanwhile in Sadr City, houses lacked running water and had electricity at best only a few hours a day.

From this realization came rage, and a query, behind closed doors, from al-Sadr to the leaders of the Communist Party. They were few in number compared to his many followers, yet he respected them as political partners. ‘And now’ he asked, ‘that we are in the Green Zone, what do you want? A coup?’ ‘No,’ was the response. ‘Now we leave, without destroying buildings or government vehicles—we begin to build a new political movement for the 2018 elections, and then, we win!’

And, win they did. It was a victory for sustained nonviolent protest, a victory that could end the years of strife that followed the imposition of a sectarian government by the United States. Saeroun’s victory will for the first time, bring to the Iraqi Parliament several women from the Communist Party, including one from Najaf, a stronghold of conservative Islam, marked by its patriarchal, tribal society.

Still, the elections were not without problem. Long-standing dissatisfaction with the government kept many away from the polls; only 45% of those eligible to vote did so. In some locations there is great concern about election fraud. Opposition parties in the Kurdish region are particularly suspicious of the low number of votes they received, and most civil society organizations denounce electoral fraud. In Kirkuk, officials are already conducting a manual recount of the ballots. Depending on the outcome, there may be recounts elsewhere.

While the supporters of Saeroun were motivated to vote by the coalition’s reform agenda, the work of forming a government that can implement those reforms will be complex. Saeroun’s 55 seats fall very far short of a majority of the 329-seat parliament. Two other lists did almost as well at the polls: Al-Nasr list, identified with the current Prime Minister Haider al-Abadi, received 51 seats, and Al-Fatih list, a coalition of the militias that took up arms against Daesh, received 49 seats. Seven other lists won smaller numbers of seats. The large number of lists, or political blocs, and the relatively small number of votes any one list received was a hallmark of this election and a striking difference from past elections.

There must now be compromise, agreements, and the forging of even broader alliances to put together a stable, ruling coalition—undoubtedly a difficult undertaking. It is not clear which of the leading lists will be given the first opportunity to attempt to form a government. Muqtada al-Sadr is reaching out widely, stating a willingness to ally with all who support a government of competent professionals and technocrats. He is adamant, however, that he would have Saeroun play an opposition role rather than support a sectarian government.

The current situation, itself the result of an unlikely alliance of diverse groups within Iraq, and especially the tireless efforts of activists that the ICSSI has worked with for years, leads us to believe that another Iraq is possible, and that it is being built now.

The Protest in Iraq: a National, Popular and Nonviolent Movement 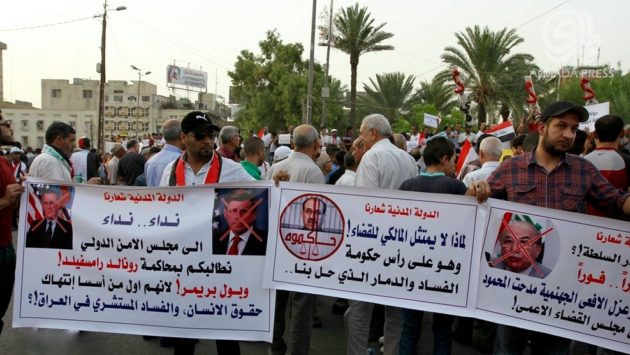 A localised Approach on Consensus-building and Reconciliation in Iraq