Despite the relative progress which was made by woman working in the media sector after the fall of the former regime — as evidenced, for instance, in radio and television and newspaper editing — women’s presence is still impeded by a series of obstacles that limit their progress in this field. While women are increasingly present and active in the media sector, they are often excluded from decision-making positions. Women are absent from active participation in the management of media institutions: they are not involved in overseeing major political programs, and they are generally absent from editorial pages. Too often, women are limited to writing on what are considered ‘women’s issues’.

Various media organizations are aware of this fact but avoid mentioning it. According to a study prepared by the Iraqi Women Journalists Forum, it was clear that discrimination on the basis of gender, harassment, quotas, and a general lack of fairness and equality are the most difficult problems faced by women journalists in Iraq today. The study gave a grim picture of the situation of women working in the media sector in Iraq: 67% of women journalists replied that opportunities for managerial and editorial positions were not equal for women and men; 46% of women did not receive bonuses or letter of thanks, in spite of doing distinctive work; and a mere 1% of women are heads of their departments, editorial or secretarial. Unfortunately, until now no woman journalist has been the director of a media organization. This is likely due to the fact that most of the local media follows the political party that funds it, and some of these parties have a negative impact on women’s work due to their religious and traditional views. Until recently, women were excluded from participating in local and international conferences and did not get enough training and capacity-building opportunities. 36% did not have a chance to work in a way that was commensurate with their competence and expertise, 20% of women have been forced to work extra hours without extra pay (usually from the private sector), and 22% reported being exploited by their mangers. One of the biggest difficulties faced by women journalists is harassment — many journalists have complained about sexual harassment and violence in the workplace. This is reflected clearly in the questionnaire mentioned above in which 68% of journalists reported being harassed on the job. Despite this kind of grave violation, 42% of them said that they continued to work. 40% of them remained at work for fear of defamation; 24% because of financial need; and 36% for other reasons.

Some governmental institutions and non-governmental organizations rejected these findings — including the Journalists’ Syndicate — under the pretext that customs and traditions in the Muslim community prevent frank talk about harassment. Through interviews and meetings held by the Iraqi Women Journalists Forum, we found that most of the threats, intimidation and abuse directed towards women journalists occurred in workplace, and were often committed by the heads of the institutions and coworkers. As most cases of harassment and violence were not reported, the majority of women journalists said that they were affected psychologically. The nature of Iraqi society is traditional and religious, governed by old customs and practices which operate under preconceived ideas about what constitutes appropriate work for women — this generally does not include jobs in the media sector. These prevalent social norms make it difficult for a women to claim that she has been harassed. As the Iraqi Penal Code lacks a clear legal article that punishes sexual harassment of women at work, this kind of discrimination is very difficult to identify and prosecute. There is a relevant legal article, 402, still valid today, which fines the harasser a mere 75 dinars for his release. Such a light fine is a shortcoming in the law and should be remedied.

In addition to what has been said above, women are subjected to a kind of journalistic violence and defamation linked to social networking sites and Facebook which some use to fabricate news, or share fake pages, fake images and fake videos.

The most important problems and constraints faced by women journalists:

The problems faced by women was the main reason for the establishment of the Iraqi Women Journalist Forum (IWJF) — this need was made particularly evident when the journalists’ syndicate denied the reality of any issues facing women journalists. The first step for the forum was the allocation of a day dedicated to women journalists in Iraq (February 22), the anniversary of the martyrdom of our colleague Atwar Bahjat. On this day women journalists are celebrated, and outstanding journalists are honored. Today, the number of officially registered journalists in the Forum’s membership is more than 300 journalists from various provinces of Iraq.

The IWJF was able, despite lacking any financial support, to act in coordination and cooperation with government institutions, non-governmental organizations and diplomatic missions. Through this, it has been able to achieve the following:

Third: Support in our campaign demanding a quota for women journalists.

Fourth: Our Forum aims to establish a women’s media agency to produce programs for radio and television which raise awareness about the issues women face.

Fifth: Launch a campaign to amend the Iraqi Penal Code to sue all those who harass women.

Sixth: Our Forum actively supports all campaigns related to freedom of the press and freedom of expression. 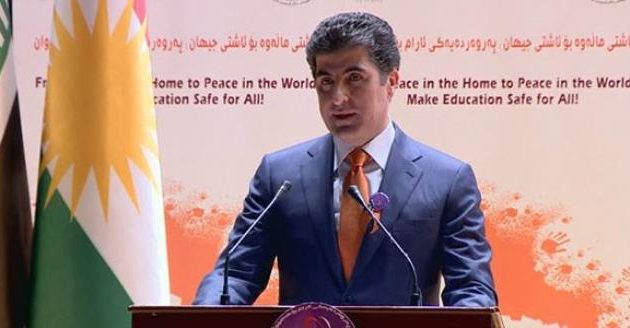 Nechirvan Barzani: We Seek to Improve the Mechanisms of Application for Anti-violence Against Women Laws