Update: The Seven students have been released a day after they have been abducted, however, no concrete steps have been taken to hold accountable the group that kidnapped them. Civil society activists in Iraq are preparing to demonstrate in the central and southern Iraqi cities of Baghdad, Nasiriyah, Diwaniyah and Amarah to demand the release of seven students who were abducted at 1:30 am on Monday, May 8th. This quick response that comes in conjunction with supporting actions on social networking sites one day after the kidnapping.

Very early in the morning, an armed group dressed in civilian clothes in an SUV with tinted windows abducted the seven student activists from their apartment in Al-Bataween area of central Baghdad, and took them to an unknown destination.

The students are activists in the Iraqi civil society movement, which has only engaged in peaceful protests. One of them is a journalist working for the newspaper of the Iraqi Communist Party and others include activists in a left-wing student union of the same party. The students are from cities in southern and central Iraq, but they are studying in Baghdad and live in an apartment in the center of Baghdad (Al-Bataween area). Their names are: Ahmed Na’im Ruwayi, Haydar Nashi Hassan, Ali Hussein Shnawa, Samir Amir Mussa, Abdullah Latif Faraj, Zaid Yahya, Hamza Younis. These students were regularly participating in the demonstrations in Tahrir Square, which demand political reforms and an end to the government corruption that is squandering Iraq’s wealth.

Some of them have published critical views concerning the militias or leading figures on Facebook pages; others have strongly criticized the religious marches and events that have taken a lot of the attention of Iraqi public and distracted them from the development of the country.

It is likely that the abduction of the seven students is directly related to their civic activism, both in participating in demonstrations or criticizing negative phenomena in Iraqi society. Since the start of the ongoing protests in Baghdad in 2015, the civic demands calling for reform and change, fighting corruption and fighting ignorance and absenteeism have attracted Iraqi youth in general and university students in particular.

This is not the first time that young human rights defenders have been abducted. Such kidnappings are usually carried out by armed groups or militias, which have a lot of freedom to move in Baghdad because of their influence over the security services that exist in the capital, putting the militias above the law.

Young protesters and human rights defenders in Iraq are demanding that the Iraqi government immediately take action to release the seven abducted students and hold the prime minister responsible for the safety of the abductees. They also call on the government to put an end to the gangs that move freely with weapons in Baghdad, carrying out kidnappings and threats in daylight.

The Iraqi Civil Society Solidarity Initiative calls on the Human Rights Office of the United Nations Assistance Mission for Iraq (UNAMI) and the European Union Mission in Baghdad, to demand the Iraqi government work to secure the release of the kidnapped students and to identify the gangs behind such operations and hold them accountable for their crimes in accordance with Iraqi law. Neither the international community nor the United Nations should ignore the risks faced by human rights defenders in Baghdad, just meters from Baghdad’s Green Zone. 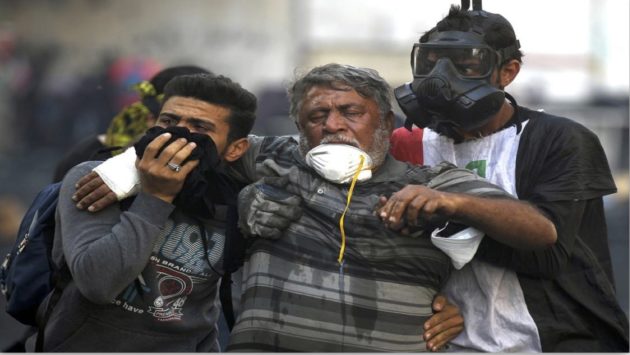