The Brotherhood and Solidarity Association of Yezidi renewed their call to the whole world to intervene immediately to help the displaced and trapped Yazidis in the Sinjar Mountains. The extent and scope of their suffering represents a humanitarian disaster.

A statement issued on Monday by the Association asserts that: “even given the dire humanitarian situation of these displaced people, ISIS continues to attack them, leaving almost no access for supplies to reach them at a time when they are so desperately in need of urgent relief aid”.

The statement added that “The international community is obligated to protect civilians of Sinjar who are waiting to be rescued. The association also calls all other capable authorities to intervene to protect those who have been displaced, to accelerate the provision of safe passage for them, and to create shelters to house them, in order to prevent further aggravation of the humanitarian disaster that threatens their lives”.

The statement pointed out that “The Association considers the ongoing violations against unarmed civilians who are now under the control of Daash a great concern. The Association’s sources confirm that gunmen have abducted civilians, especially women, and taken them to a camp inside the Syrian border. There are heinous crimes being committed by ISIS militants and they require urgent action if civilians are to be saved”. Ghazwan Al-dawoodi, a member of the Council of Nineveh, claims that (Daash) is now locked in a genocidal war against Iraqi minorities — Christians, Yazidis and Shabak — for being, in their eyes, “apostates”. He describes the silence of the federal government about the current massacre of Iraqis a concern of third mandate as a “shame”. At the same time, a security expert believes that Daash seeks to control the mountainous areas and the Nineveh Plain to acquire oil, and the Mosul dam to control the source of electric power. He asserts further that (Daash) is trying to secure logistical  support between the east of Syria and the west of Iraq, and does not want to cross the border and risk exposure to Peshmerga forces.

The members of the Nineveh provincial council report that: “the support of international organizations and the Iraqi government is not enough to rescue the displaced people, pointing out that “minorities” in Iraq are currently exposed to a genocidal war, and live under the control of a terrorist organization which is trying to eliminate them and subject them to its rituals  at gunpoint”.

An informed source in Nineveh province reported on Sunday that the militants of “Daash” blew up all religious shrines of the Yezidi religion in the Sinjar district (120 km west of Mosul).

The source reported earlier that Daash militants took control of the districts of Sinjar and Rabia in the Western of the province after the withdrawal of the Kurdish Peshmerga forces without a fight.

The Iraqi state television announced on Sunday that gangs of “Daash” blew up the shrine of Sayeda Zainab (AS) in the district of Sinjar, west of Mosul. This came after blowing up other religious shrines and mosques in the city of Mosul, most notably the shrines of the Prophet Sheet and the Prophet Yunus.

A Yezidi Member of parliament in the Kurdistan Alliance, “Vian Dakheel”, warned on Tuesday in a press conference held at the parliament building of the “genocide” of those who follow the Yezidi religion, and pointed out that the organization of (Daash) committed “the slaughter of 500 Yezidi and holds 500 women in captivity”. She called upon the governments in Baghdad and Erbil to “end their conflict and save the Yezidis”.

Dakheel added that “30 thousand Yezidi families left Sinjar, and 170 old men, children and women died because of the atrocious humanitarian situation they faced. The federal government must liberate them from this tragic situation”. 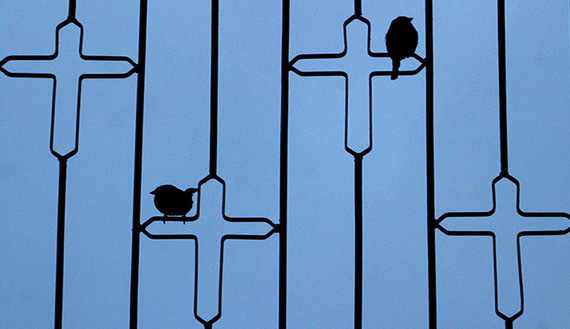