BAGHDAD — Iraqi officials said Thursday that political leaders had started intensive jockeying to replace Prime Minister Nuri Kamal al-Maliki and create a government that would span the country’s deepening sectarian and ethnic divisions, spurred by what they called encouraging meetings with American officials signaling support for a leadership change.

President Obama implicitly added his voice on Thursday to the call for change, saying any Iraqi leader must be a unifier. He declined to endorse Mr. Maliki.

At least three people, who like Mr. Maliki are all members of the Shiite majority, have emerged as possible candidates to take over as prime minister, with more potential nominees in the wings as parties negotiate alliances from the recent elections. Any prospective successor must convince Iraq’s Sunni Muslims and its ethnic Kurds that he can hold Iraq together, as well as vanquish a Sunni-led insurgency that has escalated into a crisis threatening to partition the country.

Moreover, a new leader must find a way to assuage the many demands of the Sunnis and Kurds, who have long complained of being unequal partners in the country and view the negotiations to pick a new prime minister and other central figures as a rare moment when they have the leverage to enhance their political power and right what they perceive as past injustices.

The Kurds want the Iraqi central government to recognize the contested city of Kirkuk, endowed with oil, as part of the autonomous Kurdish territory they have carved out in the north. The Kurds also want assurances that they can sell the oil from Kurdistan without oversight from the central government.

The Sunnis want to lead at least one security ministry, such as defense or interior, and control some of the other powerful ministries such as education or higher education, both rich in patronage and jobs.

So far the only point of near agreement among Iraq’s political factions is that Mr. Maliki, who has been prime minister since 2007 and is in his second term, must go.

“We will not allow a third term for the prime minister; they must change him if they want things to calm down,” Nabil al-Khashab, a senior political adviser to Osama al-Nujaifi, the former speaker and most prominent of the Sunni leaders, said Thursday.

Even some of Mr. Maliki’s former supporters among the Shiites have turned openly hostile.

“He doesn’t have the right to a third term,” said Dhiaa al-Asadi, a senior leader of the Ahrar bloc, a party associated with Moktada al-Sadr, the influential Shiite cleric. “We are sure we can remove Mr. Maliki through constitutional means.” 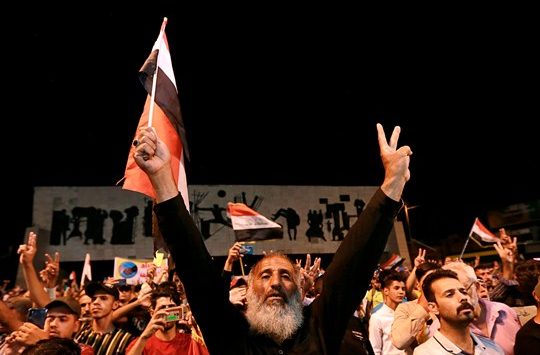 Will It Be Another Summer of Discontent in Iraq?