Campaigning for Iraq’s elections started last week. Almost immediately the nation’s streets were covered in campaign posters. Now locals say reading between the posters’ lines it’s possible to discern hidden messages about new alliances, trends in candidature and the shifting political landscape as well as answer questions like: Why is everybody campaigning in Baghdad? And why are religious parties touting good looking, unveiled women as candidates?

It’s been a week since campaigning began for Iraq’s general elections, due to be held at the end of this month, on April 30. After just one week of being bombarded by campaign messages and seeing streets covered in election materials, locals are gleaning hidden messages from campaign posters and other election materials. These messages indicate new alliances, surprising new methods and interesting new personalities on the shifting political scene.

For example, one of current Prime Minister, Nouri al-Maliki’s latest methods seems to be to bring his family with him on the campaign trail. Many of his relatives already occupy senior positions in various government departments and in the past they have been reticent about declaring those interests and have shunned publicity. But now some – like his eldest daughter’s husband and his youngest daughter’s husband, Yasir al-Maliki – are running for seats in Parliament and openly advertising their relationship with the country’s leader. The same goes for an increasing number of al-Maliki’s relatives and members of his tribe.

Other noticeable additions to the al-Maliki camp are high profile defectors from other parties, such as Alia Nassif, formerly an MP for the Iraqiya list – who is now listed as number 36, higher up on al-Maliki’s party list than some other, long-standing senior members.

The election campaigning has also made it clear that a lot of the candidates for al-Maliki’s State of Law bloc are first-time political wannabes, who are not well known in political, business or social circles. Some have said this is because the State of Law wants MPs who will toe the bloc’s line, unlike high profile defectors like senior MPs, Hussein al-Asadi and Jawad al-Bazzouni, who have both left al-Maliki’s Shiite Muslim coalition to join the also-Shiite-Muslim-dominated Citizen, or Muwatin, bloc.

Also clear, judging by State of Law candidates’ posters, is how al-Maliki wants the world to see him – as a strong, anti-terrorism leader. Many of the posters’ backgrounds feature pictures of Iraqi army soldiers and tanks.

In their campaigning, the United coalition, which is led by one of the country’s most senior Sunni Muslim politicians, Osama al-Nujaifi, has also tried to push candidates with closer ties to them, many of whom come from Sunni Muslim tribes. However there are currently big problems in communicating with those tribal groups in the Anbar province, because of ongoing military operations and violence there.

Meanwhile the Citizen bloc has also surprised some with its campaign materials. This party is dominated by religious interests and led by the Islamic Supreme Council of Iraq, or ISCI, which is headed by relatively young cleric, Ammar al-Hakim. Some of their posters feature defectors from their former coalition ally, al-Maliki’s party.

Others feature female candidates who don’t appear to have any ongoing link to the ISCI. And even more interesting, these female candidates for the Citizen bloc are not veiled. This is thought to be the first time that an Islamic-oriented party has allowed such a thing. Some cynics have also noted that a lot of the unveiled women are actually very attractive – and they joke that the ISCI is trying its very best to appeal to young Iraqi voters with good looking candidates.

The Citizen bloc also has other surprising candidates on its posters – some of their allies come from distinctly secular backgrounds and include academics, journalists, acclaimed intellectuals, actors, writers and even sportspeople. Then again maybe this shouldn’t be so surprising: The Citizen bloc is taking a leaf out of the Barack Obama political playbook with its slogan, Change.

Speaking of secular, there is another new party worth noting competing in these elections. Locals with mainly business or economic interests have formed their own coalition for the first time, named the Iraq Coalition. It’s being led by Mahdi al-Hafeth, a well known businessman who was Minister of Planning straight after 2003’s US-led invasion of Iraq.

Meanwhile former Prime Minister Ayad Allawi is distinguishing his party, Wataniya, from other parties by attempting to exclude almost all religious overtones; his candidates consist of civil society activists, women’s rights campaigners and personalities form Iraq’s secular society. It seems that Allawi wants to send a loud and clear message that he remains a liberal personality who believes in the separation of church and state.

Another notable new group is the Civil Democratic Alliance, formed as an umbrella organisation for a number of smaller, secular parties and civil society groups. Prominent members include the Iraqi Communist Party and socialist groups – and although this is the first time the parties have competed in elections altogether in a group, they have individually had success in other Iraqi elections, with seats won by one or another member of the group in most Iraqi provinces; they can be expected to repeat that this year, but as an alliance.

And finally looking around at the campaign posters in Baghdad, it’s also obvious that a lot of candidates are fighting for seats outside of their home provinces. This includes Hassan al-Snaid, head of Baghdad’s Parliamentary committee on security and defence, who competed in Dhi Qar province previously, the Minister for Human Rights, Mohammed Shayaa al-Sudani, who resides in the Maysan province and a senior politician from al-Hakim’s group, Hammam Hammoudi who was a candidate in Dohuk before.

Analysts say these candidates – and others like them – are taking a big risk by competing for seats in Baghdad. However they have good reasons. As incumbents, they may well have lost popularity in their home towns over the past few years as the Iraqi government has not been seen as particularly effective by locals. Additionally Baghdad offers them the biggest pool of voters in the country and also the most ethnically and religiously mixed pool, which may level the playing field somewhat. 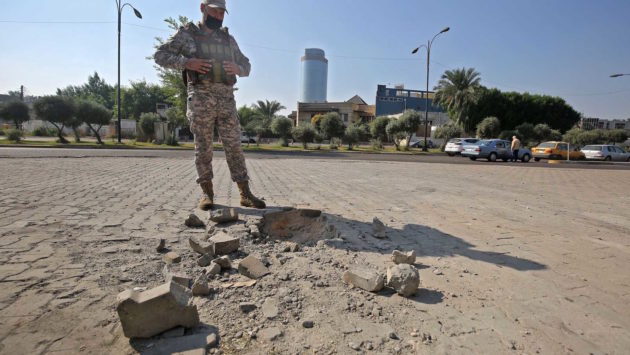