The Iraqi Parliament is working on a weak Labor Law and a Trade Union Law that does not respect the right of workers to organize in the public sector! They demand the Iraqi Council of Representatives to vote on the labor law taking into account the amendments made ​​by trade unions and endorsed by the International Labour Organization. At the same time, unions reject the proposed law on trade union organization sponsored by the Labor Committee because it allows only workers in the private sector to organize in unions and deprives public sector workers of this fundamental right.

Trade unions remark in their statement that Iraqi workers kept rallying for their rights “in all business sectors, including the public sector, and in spite of the choice of all governments after 2003 to keep the unfair laws of the former regime, which confiscated workers right to organize themselves in the public sector: the decision of the dissolved Revolutionary Command Council No. 150 of 1987, the Workers Law in force No. 71 of 1987 and the notorious Law of Trade Union Organization No. 52 of 1987”.

Labor unions demand the abolition of decisions and laws issued during the previous decades as they are inconsistent with the fundamental rights of workers according to Arab and International Labor Conventions, and in particular with trade union freedoms. Iraqi unions proposed amendments in the process of drafting the new laws, working side by side with the Labor and Social Affairs Committee of the Iraqi Council of Representatives, with direct technical support by the International Labour Organization (ILO), The International Trade Union Confederation (ITUC) and The Solidarity Center, with the moral support of international trade union organizations.

The draft Labor Law produced by the Work Committee and approved by the Legal Committee has been read twice in the Iraqi Council of Representatives, and the process of voting started on some of its articles. Then voting stopped for more than two months because of political conflicts and lack of quorum in the House of Representatives.

Trade unions stress that the current draft law still contains irregularities, especially regarding the right to collective bargaining and the right to strike and assembly, which are restricted with respect to international labor conventions’ standards. The current draft law recognizes the right of collective bargaining only to unions representing 50% of the company’s workers. Others gaps have been signalled by the International Labour Organization and other international trade union organizations regarding the mechanisms of resolving labor disputes an applying collective labor agreements.

Iraqi unions are convinced that overcoming these gaps is essential and possible through amendments, so they ask for voting on the current draft to be resumed as soon as possible. According to their assessment, the current draft includs positive points when compared to the valid Labor Law, such as the prevention of discrimination in all its forms, the prohibition of forced work, the protection of working women and the recognition of the right of workers to bargain collectively and to strike.

Disagreement is still strong between unions, who demand the right to organize in unions for public-sector workers, and Iraqi politicians who refuse to approve it, and want to limit it to private-sector workers, following laws passed by the former regime. This was clear in the process of drafting the Trade Unions Law, which went through the first reading in the Parliament. In their statement, union asserts that: “the right to organize in the public sector is a core issue and one of the top priorities of Iraq trade unions, who will not renounce to it under any circumstances. It is a right guaranteed by Arabic and International Labor Agreements, by the Universal Declaration of Human Rights and the International Covenants, and Iraqi workers will never give up their rights”.

Full text of the statement in Arabic 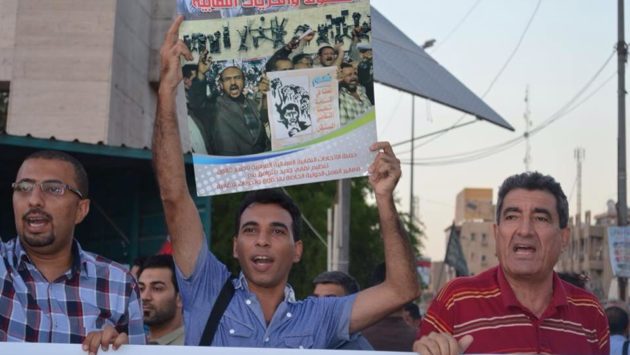