Unions in Iraq, with the IndustriALL–affiliated Iraqi Federation of Oil Unions (IFOU) at the forefront; continue to demand that Parliament passes fair labour & trade union legislation before their current session ends in June. Oil workers are considering further action in support of these demands.

All IndustriALL affiliated trade unions in Iraq together with other unions are continuing to press Parliament to urgently pass fair and ILO-compliant labor and union laws.
Despite the fact that the country’s latest Constitution recognizes worker rights and the right to unionise, in the absence of new labour legislation the government and courts continue to apply the appalling legislation of the Saddam Era that bans trade unions in the public sector and severely affects the unions’ ability to exercise even basic rights.

Currently there are three different versions of both the labour and union laws in different stages of the legislative process. Over a series of meetings, including a five-day conference with international participation, held in Erbil, in November 2013, unions have met with government delegations and had detailed discussions on draft legislation, including a fully ILO-compliant version produced by the trade unions.

IndustriALL launched a web-campaign in support of these demands, as well as lobbying the Iraqi government representation in Geneva.
A clear bottom line for the unions is that an ILO-compliant trade union law must apply to workers and employees throughout the public sector and it must recognise the present day reality of trade union pluralism.

IndustriALL Global Union General Secretary, Jyrki Raina said:
It really is time now for the old laws of the Saddam Hussein era, presently used against trade union organisation, to be finally consigned to the dustbin of history and a new era of respect for trade union rights begun.

However it is now clear that the government-backed Parliament Labor Committee versions finally put forward remain restrictive of worker rights and continue to deny the right of public-sector workers to unionise.

Hashmeya Muhsin al-Saadawi, leader of the Electricity Utility Workers’ Union stated:
The new draft labour law doesn’t include serious improvements to the old laws. Moreover, the insistence on excluding the public sector workers from the new law will make it to only cover less than 25% of the total workforce of Iraq. We need fair laws for all Iraqi workers with no exception.
Oil workers have continued to protest. Hundreds of South Oil Company (SOC) workers held protests throughout December.

Iraqi oil workers’ leader Hassan Juma’a said:
Regrettably, there are many gaps in the current draft labour law discussed now in the Parliament. Iraqi unions and federations sent their observations/comments on the law, but sadly the parliament still didn’t consider them. As for the law of trade union freedoms and after much efforts and concluding an agreement with the parliamentary committee on manpower, we see now a conspiracy aiming at withdrawing the draft from the Parliament. This is because some political blocs object to trade union pluralism. We call on international organisations to push the Parliament to adopt the inclusion of public sector workers to draft law. 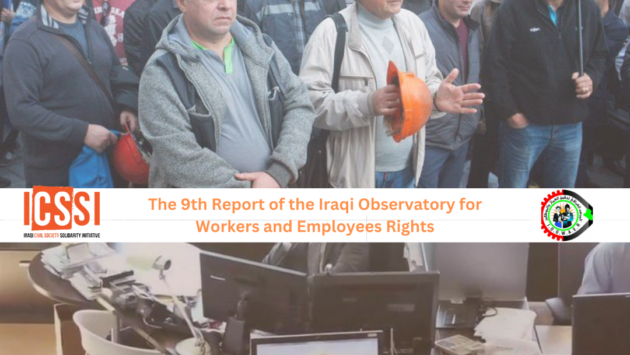