During 2013 members of the press who were killed or injured in Iraq climbed to alarming numbers, while freedom of the press was smashed between the hammer of armed militias and the anvil of the government.

The Press Freedom Advocacy Association released its annual report for 2013, highlighting the serious deterioration in the working conditions and the safety of journalists in Iraq over the last year. The Association cited 286 cases of violent acts against journalists, including kidnappings and abductions, threats, bullying, beatings, and obstruction of their coverage of events. Twenty-one reporters and journalists were killed; most of these martyrs were specifically targeted because of their work. According to the Association, this is the most serious decline in the situation of journalists since 2007 when widespread civil conflict claimed the lives of thousands of citizens, including journalists. The Association stated that this violence is largely caused by armed militias that operate freely in many areas, regularly threatening journalists with violence and death. The government allows these perpetrators to carry out their attacks with near total impunity. The province of Nineveh was identified by the Association as the most dangerous place in Iraq for journalists to work. Indeed, most journalists there have abandoned their work as a result of the threats and killings.

Even as the government has failed to address the dramatic increase in violence that journalists are experiencing, it has reinstituted laws and practices of the Saddam era that pose tremendous challenges to freedom of the press. Journalists have been detained, arrested and tried. The Association cited more than 700 cases in which members of the press have been brought before the court of “publication and media” regarding “crimes of libel and defamation” based on an Iraqi law of 1969. In addition, new legislation adopted in 2011, the so-called “Rights of Journalists Law”, severely threatens freedom of the press, and with it the transformation to democracy in Iraq. The Association worked for the repeal of this law, and later proposed amendments to the sections of the law that threaten press freedom to the Parliament’s Committee of Culture and Media in September 2013. It also filed a lawsuit in the Federal Court to force the government to revise the law, but until now, the Parliament has not placed discussion of these crucial issues on its agenda. Iraqi Journalists Who Were Killed in 2013

The Association also cited many violations of journalists’ rights that reflect a mentality on the part of the authorities that does not respect the freedom of the press. Especially in Baghdad, journalists and the media are not allowed to operate unless the security forces approve their activities; granting of permission is often erratic and follows no clear, legal regulations. Among the threats and intimidation that journalists experienced were:

While those targeting journalists are usually terrorists and illegal militias, it is the failure of the government to take these attacks seriously, and to identify and capture the criminals that has produced the crisis journalists now face. The impunity that those who threaten and kill journalists enjoy ensures that someone who does not like what a reporter says or publishes feels free to use violence against that reporter. In some cases, the militias have affiliations with political parties or factions.

There has been only one case in which the authorities apparently captured someone who killed a journalist. This was in Kurdistan where the government said it had arrested the criminals who killed Kawa Kirmani, but they gave no further details. The claim the authorities made that the man they arrested for killing TV anchor Nibra Al Naiemy had only been trying to steal her purse is not convincing. Most importantly, the programmatic killing of journalists in Nineveh cries out for serious official investigation.

While the increased targeting of journalists has been devastating, freedom of the press is Iraq is also gravely threatened by the so-called “Rights of Journalists Law”, passed by Parliament in 2011, which contains five articles carried over from laws of the Saddam era:

In addition, the order of the Coalition Provisional Authority, #14 of 2003, which is concerned with prohibited media activity, allows the prime minister to close any media outlet and confiscate its office or money and also imprison its staff. Other laws that have been carried over allow the government to monitor or interfere in editorial policies and to nationalize the media and newspapers. These laws clearly state that media outlets should be owned by the government. For this reason, the Association, hundreds of journalists, and many Iraqi NGOs agree that this law threatens freedom of press and creates a media controlled by the state once again.

Finally, the Parliament is considering a number of draft laws that would further limit freedom of press and free expression; they are a clear challenge to the Iraqi Constitution and to many of the international human rights agreements signed by the Iraqi government. They include:

The Iraqi Civil Society Solidarity Initiative (ICSSI) works to raise awareness of the importance of combating violence against journalists. The ICSSI believes that the targeting of human rights defenders and journalists in Iraq threatens any real progress towards democracy and a stable civil state. It has joined with Iraqi civil society organizations concerned with the deterioration of the safety and working conditions for journalists to insist that the protection of Iraqi journalists is the responsibility of the Iraqi government and local authorities. All violations of journalists carried out by security forces must end. In cases where non-state actors or armed groups are committing violations, the government must be responsible for identifying, capturing and punishing all criminals. The phenomenon of impunity must end.

The ICSSI supports the demands of the Press Freedom Advocacy Association to amend the “Rights of Journalists Law”. Iraqi laws must be consistent with international standards on human rights in general and freedom of the press and freedom expression in particular, especially those laws that are relevant to access to information.

To read the full report of the Press Freedom Advocacy Association in 2013  Annual-Report-2013.doc.pdf 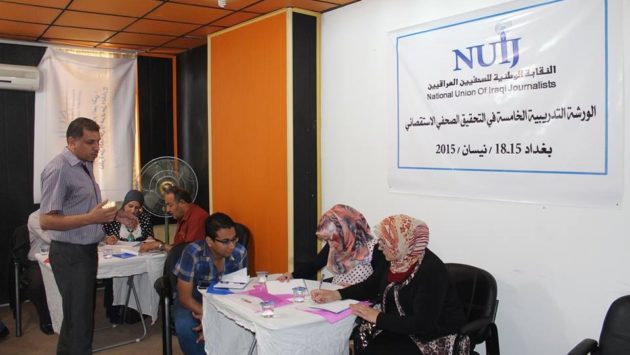