This is the seventeenth report of the Gulf Centre for Human Rights (GCHR) which covers the reality of human rights violations in Iraq. The report highlights the assassinations, bombings, prosecution of activists, restrictions on the media, attacks against prominent demonstrators and other peaceful citizens, and the continuous targeting of civil society workers and protesters actively participating in the current popular demonstrations. It also reports on the latest news of the protests and advocacy campaigns to end impunity. While perpetrators were arrested in several cases, many other cases of civil society activists being shot or attacked in their homes remain unsolved.

Arrest of a number of perpetrators

On 27 July 2021, the official Security Media Cell in the Ministry of Interior announced the arrest of the killer of the young citizen Ali Karim, son of prominent human rights defender Fatima Al-Bahadli, who was killed in Basra Governorate after leaving his home on 23 July 2021.

On 24 July 2021, the Maysan Governorate Police Directorate announced the arrest of two perpetrators in the murder of the folk poet Jaseb Hattab Al-Heliji, the father of human rights lawyer Ali Jaseb Al-Heliji, months after the arrest of the first person accused of killing him.

On 16 July 2021, the Iraqi government announced arresting the killer of journalist and well-known security expert Dr. Hisham Al-Hashemi, who was assassinated on 06 July 2020, in front of his house in Baghdad. Iraqi Prime Minister Mustafa Al-Kadhimi commented on the arrest, saying: “We promised to arrest the killers of Hisham Al-Hashemi and we fulfilled the promise.”

On 16 July 2021, the police in Basra Governorate, south of Iraq, arrested a person accused of the crime of murdering lawyer Haider Wadi Al-Mousawi on 10 July 2021, who confessed to committing the crime in association with fugitive defendants who are his father and brother.

Civil society activists are no longer safe even in their homes, where they are sometimes targeted with explosive or sound bombs, and at other times with bursts of bullets. In the past year, the rate of attacks on activists, many of whom have been displaced from their homes, has increased. The Iraqi authorities have so far not been able to arrest any of the bombers on the homes of activists.

On 08 August 2021, in the early hours of the morning, a prominent civil society activist and one of the protest leaders in Wasit Governorate, Qassim Bahloul Al-Tamimi, survived an assassination attempt by unidentified gunmen who opened fire on him in the Centre of Kut city and fled. He was hit by two bullets in his body, and taken to the hospital for treatment, leaving him in stable condition.

On 26 July 2021, unknown persons detonated an explosive device in front of the house of civil society activist Ibrahim Kased , located in the Al-Shuhada neighbourhood in Nasiriyah city, the capital of Dhi Qar Governorate, in the south of the country, causing only material damage. Activists close to Kased told GCHR that “he was targeted because of his continued protest and mobilisation to come out against corruption and corrupt officials.”

On 20 July 2021, an explosive device exploded in front of the house of prominent civil society activist Salam Al-Asmi , causing only material damage to his house and car.

On 17 July 2021, late at night, civil society activist Abuelias Al-Saadoun survived an assassination attempt on the highway in the centre of Nasiriyah, when a group of people carrying knives attacked him and tried to kill him. According to information received by GCHR, “Al-Saadoun sustained stab wounds in different parts of his body, and he was taken to the hospital to receive the necessary first aid, and his health condition is stable”.

Fatal shooting of a young athlete

On 27 July 2021, a member of the Diyala police shot dead athlete Mustafa Sattar Jabbar, nicknamed Spanish, while he was riding a motorcycle after he failed to stop at a checkpoint in Baqubah, the capital of Diyala Governorate. Jabbar, a student in the last year of secondary school, who is a member of the Diyala Sports Club, and an athletic runner who used his motorcycle in games that show his control, lives in Buhraz sub-district of Diyala Governorate. He had previously won third place in a national competition in Iraq in the sport of running, and represented his country and the preservation of this sport. After the incident, the Diyala Governorate Police Director announced the arrest of the policeman in addition to the patrol officer, and the formation of an investigation committee into the incident.

Torture and ill-treatment in Iraqi prisons

Iraqi prisons were the site of two recent cases of torture, which sent shock waves across the country, causing great concern to citizens after one prisoner died from torture.

On 15 August 2021, civil society activist Ibrahim Al-Waeli was released, after an insulting photo was published in the past few days on social media, leaked by the security forces, showing him handcuffed and lying on the ground barefoot after his arrest at dawn on 11 August 2021.

On 27 July 2021, in a case of mistaken identity, citizen Hisham Mohammed Al-Khazali died as a result of the torture he was subjected to in prison during the 24 hours that followed his arrest. He was arrested after passing a security checkpoint at the northern entrance to Basra Governorate, due to the similarity of his name to the name of a person wanted for justice.

The recent arrests of civil society activists and journalists have caused concern to the general public, due to their fears that these arrests are part of the systematic campaigns carried out by Mustafa Al-Kadhimi’s government to restrict freedom of expression.

On 05 August 2021, prominent civil society activist, Falah Al-Ziyadi, was arrested in Suq Al-Shuyoukh district in Dhi Qar Governorate after being assaulted by an unknown party. The city of Nasiriyah witnessed, upon his arrest, a demonstration demanding his release. Following his arrest, a demonstration took place in the city of Nasiriyah in which protesters demanded his release. The demonstrators blocked the main road leading to Al-Haboubi Square, threatening to continue the demonstrations until his release. Demonstrations and protests calling for his release continued. Reliable sources confirmed that a hearing for his trial will be held on 17 August 2021, in connection with his active participation in peaceful protests.

On 30 July 2021, the security forces in Khanaqin district, Diyala Governorate, Eastern Iraq, arrested a number of protesters who had organised demonstrations during the past two months, without revealing the reasons for the arrest or the number of detainees. No details were available about the detainees, as the authorities prevented them from communicating with the media and human rights organisations, according to local activists who spoke to GCHR. Subsequent reliable local reports confirmed that they were all released the following week.

On 26 July 2021, members of the Intelligence Directorate in Al-Qadisiyah Governorate, which is affiliated with the Ministry of Interior, arbitrarily and without any court order, arrested civil society activist Hussam Al-Abedi for printing and publishing a poster calling on the Minister of Interior to reveal the killers of peaceful demonstrators. The owner of a printing press, civil society activist Khaled Al-Fatlawi, was also arrested for printing the poster.

On 31 May 2021, the Second Sanctioning Body of the Federal Court of Cassation held a session during which it issued a decision to release human rights lawyer Hassan Maharj Al-Toufan as it found that “the posts he published on his Facebook page (regarding the issue of lands distributed to the judges in the presidency of the Federal Court of Appeal of Baghdad after they changed the type of the land use from agricultural land to residential land) are in their content  not an insult to the judicial institution in the province mentioned, but rather represent his own opinion.” GCHR has also viewed a copy of the Court of Cassation’s decision published on Facebook.

Targeting the media and journalists

Al-Baghdadia channel stated on its website the following: “A military force stormed the building of Al-Baghdadia channel, confiscated its equipment and arrested two of its officials, the news director Taha Khalil and the presenter of ‘Studio Nine’ program Ali Al–Dhabhawi. The intruding force claimed that it is not from the intelligence, but it is a force from the fight against crime and money laundering.” It has been closed and banned from broadcasting its programmes.

On 28 July 2021, the channel announced that the security forces had released its staff after a detention that lasted more than 24 hours.

Rights to live and terrorist attacks

Article 3 of the Universal Declaration of Human Rights states, “Everyone has the right to life, liberty and security of person.” But the Iraqi government, despite having a large number of security agencies, and large numbers of workers in the army and police, failed to protect the right of the Iraqi citizen to a free and secure life.

Terrorist operations targeting innocent Iraqis have again struck defenseless civilians. On 17 July 2021, a bombing in a market in Al-Sadr City in Baghdad killed 35 civilians and wounded 60 others. Subsequently, the Commander-in-Chief of the Armed Forces, Prime Minister Mustafa Al-Kadhimi, ordered that the commander of the ground force in Al-Sadr City be detained after the bombing, and he decided to “open an investigation by the Baghdad Operations Command to find out the circumstances of the incident.”

On 30 July 2021, Da’esh launched an attack on a condolence gathering in Yathrib district in Salah Al-Din Governorate, killing 13 people and wounding 45 others. The attack was launched by a group of snipers, and then clashes took place.

On 18 July 2021, Baghdad, along with another 14 capitals and cities were the sites of simultaneous peaceful protests and rallies calling for an end to impunity in Iraq, after the government failed to implement its repeated promises to reveal the identity of the killers of peaceful demonstrators and the perpetrators of slain journalists and prominent civil society activists.

On 03 August 2021, the UN Assistance Mission for Iraq (UNAMI) and the Office of the High Commissioner for Human Rights (OHCHR), issued a report entitled, “Human Rights in the Administration of Justice in Iraq: legal conditions and procedural safeguards to prevent torture and ill-treatment”. It concluded that, “Allegations of torture and ill-treatment of detainees are frequent in Iraqi places of detention throughout all governorates, concerning both terrorism and other criminal cases. More than half of the 235 detainees interviewed by UNAMI/OHCHR for this report provided credible and reliable accounts of acts of torture or other forms of ill-treatment. Iraqi judges, lawyers and medical practitioners also confirmed the prevalence of these practices in private discussions.” The report emphasised that, “the patterns and trends are clear.”

On 30 May 2021, the UN Assistance Mission for Iraq (UNAMI) issued its 6th report on demonstrations entitled, “Update on Demonstrations in Iraq: Accountability for Human Rights Violations and Abuses by Unidentified Armed Elements” which concluded that “The information detailed in this report indicates a lack of accountability with respect to the crimes perpetrated against protesters and critics by various armed elements commonly referred to as ‘militia’, most of whom carried out attacks anonymously and have yet to be identified publicly.”

GCHR urges the Iraqi government to: 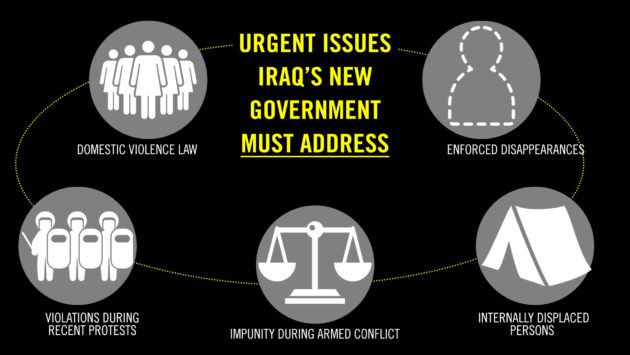 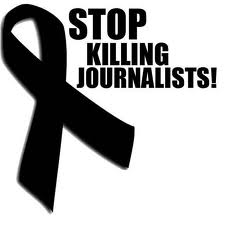