The ISF’s Vision for Addressing the Current Situation

Over the last four decades, Iraq has suffered the destruction of vital infrastructure and the failure of its service and production sectors, as a result of the senseless and immoral wars that the country was drawn into by the previous regime, the economic sanctions imposed in 1990, and the American invasion and occupation that produced rampant corruption and installed a failed system of government administration. The sectors most affected were those most important to Iraqis’ livelihood, including the healthcare sector. The widespread COVID-19 pandemic, in many countries of the world including Iraq, puts all humanity face-to-face with a unique and profound challenge.

Already, many cases have been recorded in Iraq, with a mortality rate that is quite high. The Iraqi government took some precautionary measures to fight the pandemic and avoid a total collapse of the already exhausted healthcare sector. A committee was formed to manage the crisis, “The Cabinet of Ministers—Order No. 55 Committee”. This committee issued many significant orders, including the banning of all kinds of gatherings; closure of restaurants, coffee shops, and malls; suspension of all religious and community ceremonies; cancellation of all air traffic; closure of all borders and ports; shutting down all schools and universities; and finally a curfew from 17 March to 11 April. These provisions could be extended to some unknown future date as new cases of COVID-19 are still being recorded, and there is an expectation that the number of confirmed cases will continue to increase in the coming weeks. This means that we are facing an extremely challenging task in strategizing about how to revive civil society movements in Iraq and activate them in directions to meet the demands of our current urgent situation.

It is undeniable that the COVID-19 crisis and the government’s responses have created challenges and problems at all political, economic, and social levels. Therefore, the Iraqi Social Forum (ISF) felt called upon to formulate a vision for addressing the political, economic and social impacts of the crisis with the aim of ensuring the engagement of civil society and the best possible outcomes for Iraq.

The Political Protest Movement in the Times of COVID-19

The numbers of protestors in Baghdad’s Tahrir Square and in squares in other provinces decreased significantly as the pandemic hit the country. Protestors in Baghdad and the provinces of middle and southern Iraq emphasize that these numbers will again increase once the crisis ends; the protest movement is not ending. Indeed, the protesters are studying options for new forms of engagement and escalation. At the same time, protesters have urged everyone to commit to and follow the WHO prevention guidelines. They started to sterilize and fog the protest squares and they are raising awareness about contagion and prevention. On the other hand, government authorities still procrastinate in meeting the demands of the protestors, either by choosing controversial and unacceptable people as prime minister designate, or by focusing on secondary issues rather than the issues that are essential to creating necessary change and reform. The caretaker government has proven unable to provide solutions for addressing the conditions in Iraq that led to the protests in the first place; this should be the core of its work.

Of course, being a caretaker government does not excuse it from its responsibilities and authority to form committees or allocate the funds necessary to deal with the crisis. Unfortunately, it is expected that the government’s failures will continue or grow worse with the increase of COVID-19 cases, especially since the government is still unable to adopt clear and appropriate plans and procedures to address the unique crisis we now confront. This was clear from the randomness and arbitrary nature of the decisions that government authorities made. These in turn reflected the defects in the design of the US-imposed political quota system that allocates positions and power on the basis of sectarian affiliation rather than qualifications and experience. This quota system along with efforts to impose privatization has, since 2003, progressively destroyed the healthcare system. It is also worth noting that the inconsistences in reports of the number of verified COVID-19 cases, the lack of capabilities to control the pandemic, and inadequate medical supplies and equipment all indicate deficiencies in the healthcare sector.

Based on all the above, it is clear that our country will not emerge from this crisis easily. That is why we are calling upon all sectors of civil society: trade unions, NGOs, volunteer teams, and activists, to stand together in solidarity and support our healthcare workers on the front lines of confronting COVID-19; to insist that the government fulfill its commitment to provide and provision the necessary healthcare staff and, equally important, to provide appropriate prevention guidelines for dealing with infected people, in accordance with international standards and the instructions of the WHO.

On the other hand, we think it is imperative that procrastination end now, and that the authorities must choose a prime minister designate who meets the terms and standards put forth by the protestors, leading to the formation of a government that will organize early elections according to a fair electoral law. Then Iraq may, at last, have government authorities committed to prosecuting those responsible for the deaths of protestors and to combatting corruption.

The Economic and Social Consequences of the Crisis

The direct threat to Iraqis’ lives posed by the pandemic requires comprehensive action by all state agencies, but the pandemic’s economic and social consequences are by no means less dangerous. The social and economic problems resulting from the precautionary measures adopted by the government, “The Cabinet of Ministers—Order No. 55 Committee”, and actions by the Higher Committee for National Health and Safety are severely affecting those below the poverty line and with limited incomes. These problems promise to become an even greater crisis with the severe contraction of the world economy and the dramatic decrease in the demand for oil.

Those most affected are workers, whether organized in unions or not. Inevitably, due to the curfew and the disruption of economic life, unemployment will rise as a result of dismissals and the closing of industrial enterprises and businesses. People will suffer hunger, poverty, sickness, and loss of their homes.

Unfortunately, governmental measures concentrated on social distancing without taking the needs of citizens and the outcomes of the curfew into consideration. We don’t know how long people who earn their livelihood on a daily basis can hold on.

The governmental method of crisis management has been bureaucratic, and has not sufficiently involved other elements of society. Unions, NGOs, and employers’ organizations are in direct contact with the people who will be most affected by the pandemic and the government’s responses. They have firsthand knowledge of the situation of the Iraqi people on the ground. They could provide important input and support in crisis management, and be of great service to the country. Failure to involve these organizations initially resulted in inadequate government measures with many unfortunate and regrettable side effects; it is vital to involve them now. The current situation demands the formation of an emergency committee that includes unions, NGOs and employers’ organizations to deal with all the social and economic consequences of the crisis.

Due to the curfew, internally displaced persons (IDPs) are facing extraordinary difficulties including lack of access to healthcare, since their camps are located outside of cities and strict restrictions on travel have been imposed on them.

Millions of students are also facing huge problems, since all schools and universities are closed. The new alternative is e-learning, but it is a well-known fact that Internet service in Iraq is poor and expensive. The Iraqi government should solve this problem by enhancing service and providing it free of charge to all students. Again, members of civil society have the expertise and ability to help solve this problem.

The pandemic has imposed a new reality that we must all deal with and invest our energies into overcoming its consequences. Everyone should come together in order to overcome the crisis. We must all think, suggest, demand, and participate in the field, in order to ensure each other’s health and safety. The pandemic does not discriminate by gender, sect, belief, ethnicity, or nationality. All are endangered, and all should participate in finding solutions.

Our appreciation for all those who protect us and keep us safe!

We stay home, but we stay active and participate

in building another Iraq that is still possible. 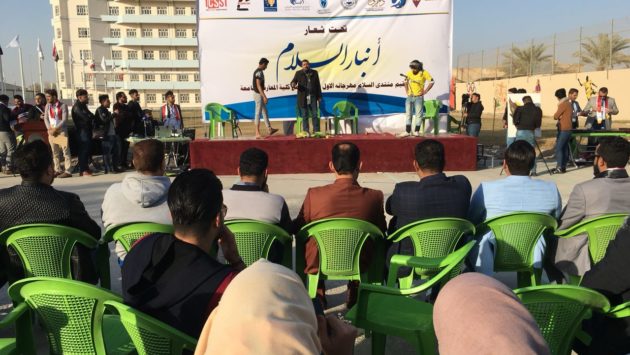