3 years since its founding, the Kurdistan Social Forum has well progressed. From 25-26 October the third edition of its annual event took place, in Erbil. The first day consisted of the Erbil Marathon, while the second day was dedicated to workshops on thematic issues. The activists from the Forum proclaimed strong solidarity with the struggles of the brave people in Rojava and Baghdad.

The Erbil Marathon is organized annually on 60m Street near Sami Abdul Rahman Park in Erbil. This year, the KSF co-sponsored the event, with the KSF logo visible on runners’ t-shirts and the course. The Marathon aims to promote peace and dialogue through sport, with over 4000 thousand men and women who took part in the event.

The next day, parallel workshops were organized by civil society organisations of the KSF. This event took place at the Social-Cultural Center of Salahaddin University. In the opening speeches, Sangar Salih (KSF coordinator) and Toon Bijnens (Un Ponte Per, representing the international delegation) applauded the KSF for its continued advocacy for social and political reform in the Kurdistan Region of Iraq, while stressing solidarity with the victims of the conflict in Rojava (North East Syria) and the ongoing protests for reform in Baghdad and Southern Iraq.

Workshops were conducted on topics such as: current state of freedom of expression in KRI, suicide among women, the current state of the unions and syndicates, coexistence among religious communities. Meanwhile attendees could handicraft and art exhibitions in the main hall. The Forum closed with a final speech and musical intervention.

The Kurdistan Social Forum demonstrated through this event that it continues to be a growing space for civil society in Kurdistan, providing an opportunity to discuss relevant society and political topics of the day. It brings people together from all walks, bridging different layers from society; a model for the region. 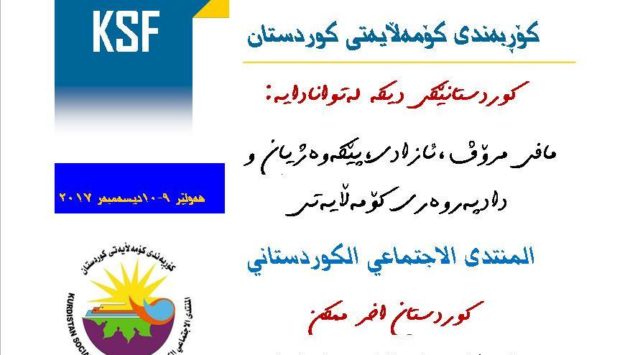