The year 2018 was marked by a severe drought in Iraq, a formerly water-rich country. The water crisis is complex, however, with multiple causes and the potential for future conflicts. A group of young Iraqi activists is trying to raise awareness about the issue.

Another Iraq is possible, the activists believe. Aged between 17 and 29 years old, they are members of various civil society organizations (CSOs). Their goal? To defend the Tigris and Euphrates rivers and the Mesopotamian marshes they irrigate, and to avoid regional conflicts over water. Climate change, drought, lack of internal water policies and the construction of upstream dams, such as the Ilisu Dam in Turkey and Daryan Dam in Iran, are some of the most pressing threats.

“Water is a right for everyone,” said Salman Khairalla (28), coordinator of the civil society advocacy campaign Save the Tigris. The campaign was launched in March 2012 by a coalition of national and international non-governmental organizations to protect the cultural heritage and water resources of Mesopotamia from the impact of dams and to draw international attention to the issue of water resources in Iraq. “We also need to raise awareness about the environmental issues within our country because nothing has been done by our government,” he said during the Marshes Festival, organized in June 2018 by CSOs at Chibayish in the Mesopotamian marshes, the heart of the so-called Fertile Crescent.

He was accompanied by a group of 30 activists from across the country. Some are members of the Iraqi Social Forum and the Iraqi Activist Network, both built around the Iraqi Civil Society Solidarity Initiative (ICSSI), others are part of Sport Against Violence, an ongoing campaign to promote peace and dialogue through sport. Also present were media activists, archaeologists, human rights lawyers, engineers, volunteers and artists such as Rashad Salim, an Iraqi-British expeditionary artist, and designer with a particular interest in the history and tangible and intangible culture of the marshes. He attended the festival to present the Safina Project, his ambitious plan aimed at reviving Iraq’s ancient crafts and boats. He believes that there is a connection between crafts and the environment, and that protection of the environment could preserve Iraqi culture.

“If there were no marshes, there would be no Sumerians. Without rivers, we would not have this civilization – not because of the water but because of the way of transporting things, so you have a connection between people. That is what makes this place unique,” said this bearded man in his fifties, seated in a traditional mudhif guesthouse constructed out of reeds and ropes.

His view is shared by Ali al-Karkhi (29), founder of Humat Dijlah, a local association that seeks to protect the natural and cultural heritage associated with the Tigris. “Without this environment, we would not have had the Sumerians, one of the first civilizations in the world. The Iraqi Marshes are in danger today, but this is not only an Iraqi problem. This should be considered an international problem because everyone will lose a unique environmental and cultural heritage.”

Iraq’s marshlands were inscribed on the UNESCO World Heritage List in 2016, after years of campaigning by Save the Tigris. Despite this recognition, under which listed sites are protected by international treaties, the water level in the marshes is still critically low, governmental neglect continues and periods of extreme drought have devastated what was once considered the Garden of Eden.

As Jassim Alasadi, managing director of the Chibayish office of Nature Iraq, explained, the livelihoods of the Madan people, or Marsh Arabs, are based entirely on water buffalos. “People depend on them. Last year, hundreds of buffalos died because of water shortage and pollution. If things continue like this, in ten years, the local inhabitants will be forced to migrate.”

Water as a tool of peace, not war

In addition to the environmental consequences related to water scarcity, activists fear that water may be used as a tool of war, threatening the stability of the region and leading to disputes and conflicts in the near future. To prevent this, Save the Tigris organized the first Mesopotamian Water Forum in Iraqi Kurdistan last April, attracting more than 180 water activists from Turkey, Iraq, Iran and Syria to the three-day event.

“The water problem in Iraq has two dimensions,” explained Ismaeel Dawood, an Iraqi activist working for Un Ponte Per, an Italy-based humanitarian organization created in the aftermath of the first Iraqi war in 1991. “On the one hand, there is very bad internal water management. This includes many elements, such as the lack of technological and modern irrigation methods and the lack of loans to encourage farmers to switch from crops that require a lot of water. On the other hand, there is a problem of weak international relations. Seventy per cent of the water is controlled by Iran and Turkey. Our neighbours control the dams and tributaries, changing their direction as political blackmail. The Iraqi government is so weak that it is unable to prioritize the water issue on its international agenda. In both dimensions, however, water is used as a political tool by Turkey and Iran against the local population living in Iraq, Syria, Turkey and Iran. This water belongs to everyone. Water should be a tool of sustainable peace, not a weapon of political hegemony, because it will cause more wars and conflicts.”

A new generation of activists

The ICSSI headquarters are housed in an ordinary apartment in the Karrada district of Baghdad that has been transformed into a shared working space for various activists. ICSSI was born out of the global coalition that, on 15 February 2003, organized the largest demonstration against the war in Iraq and has accompanied the nascent civil society in its efforts to bring about change over the past decade.

Today, most of the coalition’s members are millennials. They reject the sectarian divisions that have fed decades of violence and are disenchanted with a political system in which they do not feel represented. Moreover, nearly half of the population is under 21 and youth unemployment is high. As a result, many young people see no other options than to migrate or turn to militias that offer paid employment.

“I don’t want to leave. If everyone leaves, who stays to change Iraq?”, said Huda Jabbar, a 29-year-old activist from Baghdad. “Fighting for the environment is not common in Iraq. It’s something new, and in general people think that nothing will change. I’m afraid that the next wars will be fought over water. That’s why I believe we have to stay to make a change.”

Fifteen years after the US invasion plunged Iraq into a cycle of insurgency and war, the unrest finally seems to be receding and the country is experiencing a social renaissance. “In the last years, we have witnessed the emergence of a national movement created by young activists from war-affected areas. You would expect them to be disillusioned, but instead they have a lot of hope,” explained Martina Pignatti Morano, head of Un Ponte Per Peacebuilding projects. “Those girls and boys have taught us that they can organize themselves in different cities in a unitary process like the Iraqi Social Forum.”

However, it is not easy to be an activist in Iraq. Last year’s popular protests demanding basic services, electricity and water in Basra, Najaf and other cities in the largely undeveloped south were violently suppressed by security forces. Several protesters, environmentalists, journalists, lawyers, and human rights defenders were also arbitrarily detained, tortured and killed by security forces and militias, according to a report published in December 2018 by the Ceasefire Centre for Civilian Rights and Minority Rights Group International. Although Iraq’s 2005 constitution recognizes the role of civil society and guarantees freedom of expression, there is no specific law that protects human rights defenders and activists.

“In Iraq, we have a lot of problems to solve, but I believe that water and women’s protection should be the priority,” said Tabarak Wamedh Rasheed (25), activist and ICSSI secretariat member. “And I believe that peaceful protests and civil society campaigns can help us to defend human rights, especially the right to water.”

Although Iraq continues to face major challenges, including political, sectarian and tribal conflicts that fuel the spread of extremism, the country is staging a resurrection. A lot still has to be done to protect and strengthen human rights for all – including the right to water – but another Iraq is possible. Indeed, it is already in the making.

Tags: Save the Tigris • Tigris Protectors 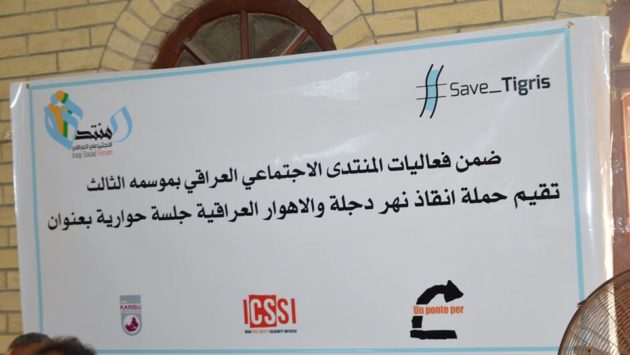 Call for collaboration on the implementation of UNESCO recommendations for the Iraqi Marshes!