On 18 May, the Alamarah Council for Social Cohesion held an open discussion session organized by the Iraqi Social Forums’s economic and social rights masar (path) to deal with urgent issues impacting the lives of workers in Alamarah. It was held in Step Center Hall  in Alamarah city.

The session opened with an introduction to the work of the Council and its members by its coordinator, Mr. Asaad Alkinani. This was followed by a discussion led by Mr. Mustafa Qusai Khalifa, a representative from ISF’s masar (path) for economic rights. Mr. Khalifa gave a brief history of the masar, and explained the key issues on which it is now working. He discussed workers’ rights, especially in relation to laws concerning social security, an essential right for workers that must respected and upheld in order to ensure decent work conditions and occupational safety for the workers in both the public and the private sectors.

The members of the council then jointly and openly explored various issues relating to workers in Alamarah and the rights they must be guaranteed in order to ensure a safe work environment. More specifically, participants reviewed the needs of workers in city hospitals, and ways to address problems of safety in the workplace and low salaries.

The council of Alamarah for Social Cohesion is one of 4 councils operating in 4 governorates of Iraq (Sulaymaniyah, Baghdad, Fallujah, Maysan). Like all 4, the Alamarah council works with the Information Center for Research and Development and the Iraqi Civil Society Solidarity Initiative and the Un Ponte Per Italian Organization within the Iraqi Social Forum and is supported by the project of the European Union, ‘ ‘Youth of Mesopotamia for Democratic Governance and Peaceful Coexistence in Iraq’. 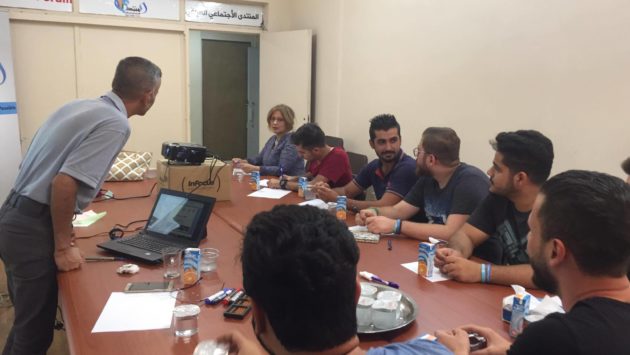