From 1-3 of May this year, in the great city of Nasiriyah the third national meeting of the Iraqi Social Forum took place under the slogan “We Love You, Iraq”. Like the civilization of Ur and the ancient city of Babylon, Nasiriyah’s contribution to our common heritage has been enormous. Situated within the cradle of civilization, Nasiriyah is the birthplace of the first alphabet and witnessed some of the first recorded laws in human history. The ISF’s national meeting, previously held in Baghdad, honored Nasiriyah  and its contributions to our heritage.

The meeting was hosted by the Dhi Qar Social Forum in Nasiriyah – Dhi Qar. Forty young men and women from ten local forums from cities along the Tigris and Euphrates Rivers met together for the third consecutive year. Each local forum presented information about their upcoming activities and campaigns, offering a clear sense of the current state of their cities. Also present were members of the Secretariat of the Iraqi Social Forum, as well as representatives from different masarat of the Iraqi Social Forum, and the Iraqi Civil Society Solidarity Initiative.

All ten local forums endorsed principles of nonviolent action as the best means of bringing about social change. They praised the peaceful protests in Iraq as positive and important, reflecting a broad public desire to address and repair the mistakes and faults in Iraq’s political and social system.

Day 1: The meeting began with a discussion of the background and history of the Iraqi Social Forum and how its work has developed and spread to cities throughout Iraq “This meeting was the culmination of a series of efforts by the Iraqi Social Forum to establish local forums in 10 Iraqi cities: Tikrit, Diyala, Babel, Fallujah, Hit, Ramadi, Najaf, Diwaniyah, Maysan, and Nasiriyah,” said Ali Saheb, the coordinator of the ISF. “Through these local forums we mainly seek to carry out activities aimed at building a peaceful coexistence, achieving social cohesion, and preserving the natural and cultural heritage to reach our goal of ‘Another Iraq is Possible’,” he added. Saheb emphasized the strong bonds that hold all Iraqis together, highlighting the symbolic and actual connection created by Iraq’s rivers, “The link created by the Tigris and Euphrates Rivers among those cities is the strongest link, one that goes beyond ethnic and sectarian differences.”

Participants also chose this first day as a time to stand in solidarity with Iraq’s workers by commemorating World Workers’ Day. Together, they called for justice for the working class in Iraq. They advocated for the passing of the new draft labor law, holding banners which proclaimed “Fair Wages and Decent Working Conditions” and other slogans aimed at shedding light on the living reality for Iraqi workers.

Each local forum presented a summary of its work during the past year, including events, obstacles, challenges, and achievements. The day concluded with lessons drawn from the varied experiences of the forums so that each might benefit from the different strengths and weaknesses of the others, allowing everyone to gain from each other so that the future might be open to new successes.

Day 2: The local forums discussed how best to organize and carry out the administrative and more specialized projects of the Iraqi Social Forum within their own cities. Karar Al Hassan led a training workshop on financial management, and specific plans for the remainder of the year were considered and evaluated. Representatives from the forums discussed possible festival dates in each city, and a combined calendar of scheduled activities for all cities was drawn up. At the end of the day, participants discussed how their local forums might contribute to the sixth season of the Iraqi Social Forum through workshops, the marathon, and festivals.

Participants also had an opportunity on this second day to meet with the director of the city’s museum, Mr. Amer Abdul Razzaq, who gave them valuable information about the most important artifacts housed in the museum.

Day 3: Participants considered the future of the local forums based on available funding, vision, and ideas. People were divided into working groups to review their strategic plans for the next 4 years. The plans for the local forums varied in their focus, including the preservation of Iraq’s heritage, protection of rivers and the environment, education and women’s rights.

The day concluded with an evaluation of the efforts made by the volunteers of the social forum of Dhi Qar, which hosted this national meeting for the first time. Naseer Baqer, the coordinator of the social forum of Dhi Qar, said, “This year was different because the local forums developed their work and gained enough experience to host such event. After a lot of work at the Dhi Qar Forum, we were able to present a convincing plan to the Secretariat of the Iraqi Social Forum and the local forums. We gained additional experience in organizing such an event. We were able to provide a comfortable and quiet atmosphere for work and we gained a lot of solidarity from the participating cities for the issues we are working on in the city of Nasiriyah.”


The ISF national meeting is part of the project, Building The Paths of Peaceful Coexistence of Mesopotamia, which is implemented in cooperation with the Information Center for Research and Development, the Iraqi Civil Society Solidarity Initiative, and the Italian Organization, Un Ponte Per….

Violence, Intolerance and the Future of Civil Peace in Iraq 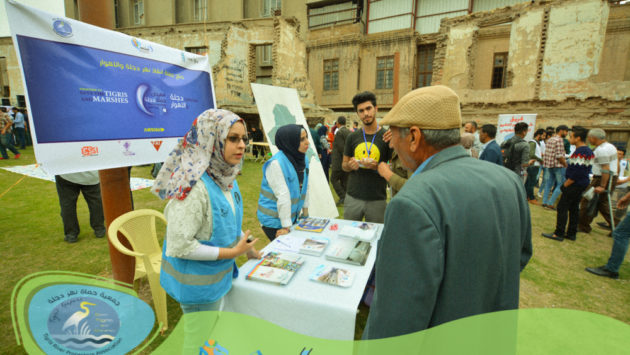