By ICSSI Secretariat and ISF – October 2017

The Iraqi Social Forum held a specialized training on economic and social rights for its 9 interpretation team volunteers on Saturday, 7 October in Baghdad. The training was given by Wissam Gasab, ISF’s Coordinator of the Economic and Social Rights masar (path), and dealt with explaining the most important terms contained in the Iraqi Labor Law No. 37 of 2015. This law, still highly contested and still in parliament, stands in direct opposition to the recognized international standards now in place to protect workers’ rights. It thus highlights key issues and associated vocabulary volunteers will need to have if they are to become effective translators.

The training explored how best to identify the correct way to distinguish between similar meanings of key terms and concepts in the law, and how to translate them accurately. It included a review of all the sections in the new labor law with a focus on those paragraphs that would do most to undermine the rights of Iraqi workers. The training also teamed up with the most prominent international organizations currently active in Iraq and which focus on the rights of workers’ and trade unions. A considerable part of the training was devoted to identifying the unions now active in Iraq, obtaining their official names and determining how to translate these names accurately.
The training was based on practical exercises aimed at building the skills of interpreters. Gasab would ask key questions before starting an exercise, and then put the same questions to the participants after they had completed it This was an effective way to highlight the difference in their information and understanding of the data involved before and after the exercise.

At the end of the training, the participants expressed their sincere thanks to Gasab. The young volunteers were not familiar with the details of the Economic and Social Rights mass (path) within ISF. They were surprised by the amount of information they acquired in the training, and the high level of specialization necessary to produce a skilled and accurate interpretation. The volunteers suggested a number of other topics related to this track that they would like to be trained in, and Gasab promised to work on meeting their requests. He also expressed his happiness with the enthusiasm of young people volunteers, and urged those wishing to specialize in translating on this topic to research, study and practice more, as a skilled translator must be familiar with the many technical and legal aspects of labor rights and freedoms granted to trade unions.

The training was important for ISF volunteers in a general sense insofar as it highlighted the need to build the capacities of youth volunteers, encouraging them to engage in more voluntary work, and to learn the key details about the various fields in which they might work. Training the interpretation team is of particular importance as its members are the focal point for all activities attended by foreign activists and researchers. Ensuring that all participants in ISF activities — Arabic and non-Arabic speakers alike — have access to the information presented is essential to building a strong, international network of civil society activists.

A Nother Iraq is Possible … Iraq of Peace, Human Rights and Social Justice 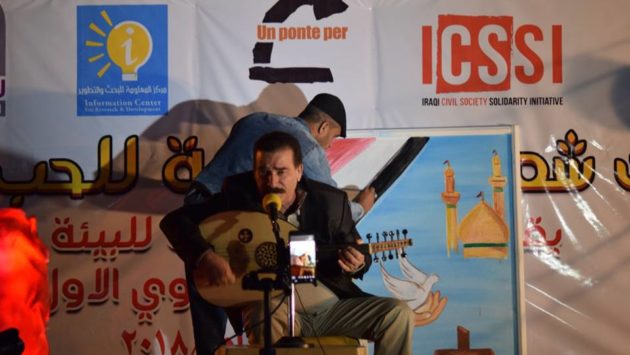