On 1 May, Iraq witnessed massive public celebrations of workers: the employed and unemployed, men and women, the disadvantaged and the marginalized. This day was a declaration of solidarity with all those ‘in the trenches’ who struggle against the exploitive practices, racial discrimination and economic injustice, which seem to grow naturally from a system of global capitalism.

The greed and injustice that capitalism tends to breed has threatened the existence of life on our planet, causing pollution of soil, water and air — all to serve the private interests and maximize profit for an elite few. For instance, large regions within Iraq (and throughout the world) have become severely contaminated by radiation, Basra is only one example of this. Because capitalism today is often understood to be a system which shuns regulation, and abandons substantive morality for radical market freedom, multinational corporations are left to seek profit by any means. The world’s resources are thus channeled according to global supply chains which keep a rich minority in power and the vast majority disenfranchised and in poverty.

Iraq is blessed with abundant wealth: it has enormous resources yet millions live in poverty, millions are looking for jobs without success, millions are denied housing, education and healthcare. These basic services are largely privatized and so national industry is limited and companies and factories are often liquidated because they are at the mercy of erratic market forces. At the same time, Asian workers have been recruited and arrive only to be exploited in slave-like conditions. Women’s lives are also negatively impacted by declining incomes, and they are too often forced into domestic labor by laws and customs that support authoritarian and exploitative regimes.

In response to this profound injustice, workers’ protests in Iraq have been ongoing over the past few years and are increasingly sharper in focus, calling for basic services and the end of corruption.

Although Iraqi workers have not established strong, wide-reaching unions and councils, their struggle has resulted in a general assembly of workers who are activists with a clear aim to achieve meaningful rights for all of Iraq’s workers. The urgent need to recognize the interests of workers and the disadvantaged requires political instruments which can operate effectively and independently of the influence of bourgeois and wealthy elite.

The experience of recent revolutions and uprisings in the region, especially in Sudan, Algeria, and France, reveal that millions of people are in need of a clear political voice which can express their needs and rights, workers need a movement which challenges the deep injustice of the status quo, otherwise they will be controlled by those powerful currents which benefit a select few and prey on the many. The erosion of liberal dreams, the diminishing of the so-called welfare state, the exacerbation of social conflict, and the exposure of class polarization are becoming more and more pronounced and are nearly impossible to ignore in our world today. With this awareness comes a choice for humanity: we are at a starting point, we can choose to enact policies that empower people and aim and a world that is more equitable, more just and more peaceful. But we cannot merely repeat our beloved slogans; we must take concrete action for positive change.

The current experience of Iraqi workers and the masses of Iraqi citizens suggests that reform is not possible given the policies adopted by the government. Current authorities do not represent an alternative to the biased and unfair conditions which characterize too much of Iraq. They are not in line with society’s wants and needs. Recognizing the strength and potential of Iraq’s workers is the solution.

Ending exploitation and injustice can come only with an end to the monstrous discrepancy of wealth and power in Iraqi society, by liberating the means of living from the control of a small elite and wealthy class, by sharing the resources Iraq has amongst all its people, and by establishing the workers as a vital authority who can represent the needs of the whole society.

May workers unite to tame capitalist barbarism and realize an equitable, fair and thriving world for all Iraqis.

Federation of Workers’ Councils and Trade Unions in Iraq

House Of The Devil? Religious Extremists Bomb Cafes In Basra Because They Employ Women 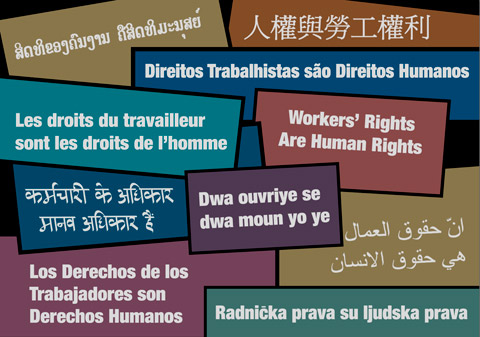