For three days in the southern Iraqi city of Basra, from October 20 to 22, more than 200 Iraqi activists, trade unionists and human rights defenders met to discuss a democratic future for their country, during the Second Iraqi Nonviolence Forum. About 20 international members of NGOs and journalists attended the event, to express their solidarity and to build campaigns that will be carried out through the Iraqi Civil Society Solidarity Initiative [ICSSI]. The ICSSI was gathering its members for the fourth consecutive year. Since 2009 it has gradually evolved from a space to understand the challenges and priorities of Iraqi civil society, into a platform for collective action in defense of human rights and social justice in Iraq. After its first two annual meetings in Europe, ICSSI conferences were organized last year in Erbil and this year in Basra, empowering local Iraqi civil society in the management of international events and attracting the interest and respect of local authorities in the development of an independent civil society. Workshops focused on specific campaigns produced very exciting and promising results. The Campaign to Save the Tigris identified as its main challenge the Ilisu Dam that is going to be built in Turkey. It will be the biggest dam on the Tigris River and will significantly reduce the amount of water that Iraq receives. This reduction will have a dramatic impact on the social, environmental and cultural heritage of Iraq. The campaign must first, therefore, raise awareness of the issues among the Iraqi people and the international community.  Then it will advocate at national and international levels to stop the construction of the dam. The Austrian company involved in the construction of the dam, Andritz, will also be targeted concerning its international business practices. Following extensive discussion in the workshop on labor rights, all Iraqi union representatives present agreed that the most important obstacle their movement faces is the lack of a just labor law, consistent with internationally recognized workers’ rights. Those present agreed to issue a joint statement, pledging to work together to pressure the Iraqi parliament to pass a new labor law with the modifications to the draft law that were previously agreed upon by labor leaders. ICSSI members from the USA, France, Italy and Spain agreed to work with labor and worker solidarity organizations in their countries to increase international support for the Iraqi workers’ campaign. Stopping human rights violations by private military and security companies (PMSCs), which make business out of war, was the focus of a third workshop. These companies accompanied the US and UK armies into Iraq during the 2003 war; they were integral to the occupation and are still widely employed in Iraq today. Nowadays even UN agencies and the Iraqi government are contracting such companies; states are outsourcing the use of force and no international law regulates these activities. Killings of civilians in Iraq, torture and abuses in prisons, demonstrate that PMSCs act with total impunity; there is no accountability and no mechanism to compensate victims. Because these issues are highly sensitive, internationals present at the workshop have been leading the campaign until now. Iraqi researchers who contributed to compiling evidence of PMSC abuses, remain anonymous. Iraqi NGOs present at the workshop agreed to organize a public information campaign and joint advocacy actions to promote the regulation of PMSCs through national and international law. Their slogan will be: Never Again! A fourth workshop was dedicated to practicing Sports for Peace. Running and walking, in particular, are activities that require no expenses for equipment and can be practiced by everybody, even the disabled, as long as the organizers of sports events aim to involve all categories of people. Marathons, races and walks are very effective ways for NGOs to reclaim the streets while involving large numbers of people in their initiatives. The first international marathon in Iraq was organized last year by civil society organizations in Erbil, associated with the ICSSI Conference.  It was repeated this year with about 5000 participants! A run for peace took place in Basra on October 19, the day before this year’s Nonviolence Forum started; there were about 200 runners, including many young enthusiastic participants. Another run is taking place today on the Baghdad University campus, organized by ICSSI member organizations and student groups. Participants in the workshop decided to organize a marathon in Baghdad in 2013, associated with an Iraqi Social Forum. NGOs will work to promote the involvement of women in all these events, and to promote sports education for all in primary schools. In the final plenary session and at a later meeting, Iraqis and internationals discussed plans for an Iraqi Social Forum, a political and social space for coordination and exchange of information among Iraqi civil society organizations who share a progressive agenda. Several Iraqi NGOs and unions are already working under the slogan “Another Iraq is possible”, to organize a forum based upon the principles of the World Social Forum Charter, uniting people who struggle for human rights, peace and social justice, against neoliberal policies and militarism. The organizers will participate in the next World Social Forum in Tunis in March 2013 and they are determined to hold the first Iraqi Social Forum event in Baghdad at the end of 2013. Following the forum, local organizers and the international delegation were received by the president of the Basra governorate council, Mr. Sabah Hasan Al-Bazoni, who congratulated everybody for the successful outcomes of the conference. He promised that local authorities will support, among other initiatives, implementation of a proposal advanced by the Save the Tigris campaign: convening an international Water Forum in Basra for the promotion of “Blue Peace” among people in Middle East. This will probably be the next occasion for the ICSSI to again visit our friends in Basra and to enjoy their fabulous hospitality. 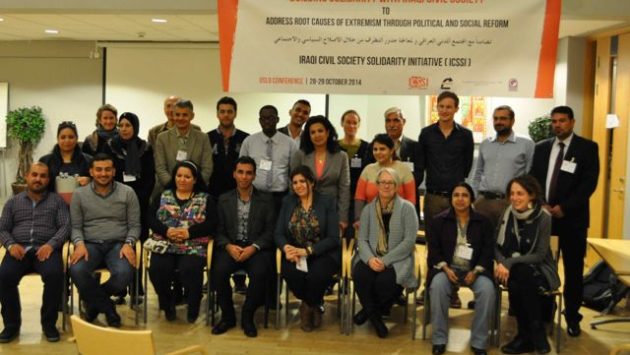