Al Abadi’s declaration on 9 July 2017 that Mosul had been liberated from Daesh sent waves of joy and relief throughout much of Iraq. Celebrations occurred across the country to mark the release of Mosul from the brutal and violent grip of Daesh. Since 2014, when Al Baghdadi declared a caliphate from the now destroyed al Nuri Mosque, residents have endured unspeakable suffering: thousands killed, millions displaced, and the city itself reduced to a ‘giant arsenal’.

The past 9 months have witnessed a savage battle to liberate Mosul from Daesh, an offensive carried out by Iraqi fighters and US-led coalition forces. The chaos and horror which ensued from the attempt to free Mosul has been relentless, particularly in the final weeks when battles were fought in the city’s old center, from one narrow alleyway to another.  Iraqi fighters provided crucial humanitarian aid, helping families to evacuate the war zone within Mosul, and find safety outside. This work was essential given official accounts of the fighting: Amnesty International reports that inhabitants were used as human shields by Daesh fighters as they tried to maintain their control.  At the same time, grave abuses from the US led coalition forces have also been reported: careless and precise use of weapons killed thousands innocent civilians — abuses that might be classified as war crimes. Recent reporting from NIQASH questions the presence of what seem to be US helicopters in Northern Iraq, an area still controlled by Daesh (http://www.niqash.org/en/articles/security/5635/Did-US-Planes-Land-In-Islamic-State-Held-Terrain-In-Northern-Iraq.htm).

Thus while Daesh has been formally removed, the city now faces significant challenges. Historically known for the diversity of its population, in the aftermath of Daesh and the need to reconstruct physically, socially and politically, Mosul must contend with how best to reintegrate minority groups into a unified city that is once again flourishing, held together at its foundation by a basic sense of trust. But this trust has been profoundly eroded, and not only among citizens of Mosul itself, who continue to fear Daesh fighters still hiding in the rubble, and who must deal with desires to seek revenge on neighbors whose family members may have cooperated with Daesh.  Equally important, trust in the Iraqi government, never very strong, needs to be deliberately fostered and cultivated. This will come only with a concerted and explicit effort to include and involve marginalized groups in policy making and governing.

As Mosul emerges again in the aftermath of this humanitarian disaster, the international community and civil society must do all it can to build solidarity, to work together to foster social cohesion, to support Mosul as it reestablishes its roots as a peaceful and diverse cultural and economic center in Iraq.  Based on a recent report from PAX (file:///Users/annehewitt/Downloads/iraq-alert-pax-and-iw-july-2017.pdf), we can identify some factors which might impede that process, and more important, actions which might aid in Mosul’s reconstruction.

Remedies aimed at improving the grave situation in Mosul must take a two pronged approach. On the one hand, there needs to be an overarching plan which organizes and coordinates the activities of a range of diverse actors, ensuring them adequate funding and sustained support. Continued protection must be offered to those living in areas still vulnerable to threats from Daesh and others (including coalition forces). But equally important — and that which the PAX report indicates is now lacking — victims need to be given a voice, focused attention must be paid to individuals who have suffered and lost so much in this humanitarian disaster. Thus while the UN Security Council, other UN bodies, governments and their institutions need to be actively involved in processes of transitional justice, a ‘top down’ approach alone is insufficient. Civil society groups and local activists must be identified and included in attempts to reestablish justice in Mosul. Victims need clear access to concrete remedies which will allow them to redress the massive atrocities that have been committed.  A failure to include civil society groups and the individual victims they represent will inevitably obscure their pressing needs and fail to protect their basic rights — unaddressed needs and ignored rights fuel resentment, which in turn will escalate tensions between groups already living in an environment marred by suspicion and instability.

And indeed, civil society groups have already started work: they have set up truth-seeking commissions in other areas, they have advocated for the referral of Iraq to the ICC, and they have attempted to gather together and document witness accounts to crimes. This kind of work, based firmly in principles of restorative justice and nonviolence, can start to bring the needs of the entire community to light. Only those justice initiatives which are transparent, and which actively involve all parties — aggressors, victims and the broader affected community — will start to establish the deep roots of trust that are necessary for sustained peace and unity in Mosul. Civil society groups and local movements have been shown to be especially effective in this, and it is to such groups that ICSSI offers its support. 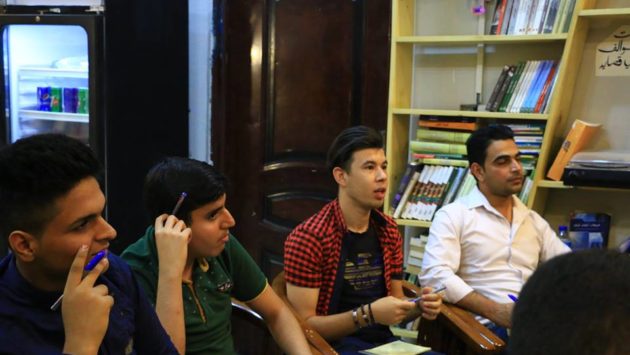 A New Statement Emerges From Iraqi Protestors: We Will Continue Until We Achieve Our Legitimate Demands