Iraqi trade unions and federations, and members of the Conference of Iraqi Federations and Workers Unions [CIFWU] issued a statement denouncing the Iraqi government’s continuing violation of the rights and freedoms of workers and trade unions. Highlights of the statement include: Below is the full text of the statement issued Saturday, 13 May 2017:

For thirteen years, all your unions and federations have struggled to defend your legitimate rights and interests, to guarantee a free and dignified life for you and your families, and to demand the provision of trade union rights and freedoms in Iraq. They have worked hard to abolish all laws and resolutions issued by the previous regime that contradict the rights and freedoms of trade unions, in particular, those that deny the right of association in the public sector.

In direct opposition to these efforts, the Council of Ministers approved the so-called Draft Law of Professional Federations and Unions in April, and sent it to the House of Representatives, which then read the draft in the parliament through the Committee of Civil Society Organizations on 10 May in the fastest legislative process ever witnessed in Iraq!

The Draft Law of Professional Federations and Unions, submitted by the Ministry of Labor and Social Affairs to the Council of Ministers, completely contradicts a great many Iraqi laws and international labor standards on trade union rights and freedoms, including the International Labor Convention No. 87 of 1948 on the rights and freedoms of trade unions. The draft law, which was read for the first time a few months ago before the Civil Society Organizations Committee asks to postpone its second reading. That committee is not properly concerned with this Convention or this law since trade unions and federations are not subject to the laws of civil society organizations. This law should be under the jurisdiction of the Parliamentary Labor Committee, which must respect trade union freedoms, recognizing that they are one of the four pillars of the UN’s International Labour Organization’s [ILO’s] international standards. The draft law also includes violations of the Constitution of the Republic of Iraq, which Iraqi unions listed in their letter to the Ministry of Labor and Social Affairs in December 2016. Unfortunately, the Ministry ignored all these failings and proceeded to push the legislation through the Council of Ministers without addressing the 28 fundamental problems in the draft law’s 23 articles, which are evidence of the draft’s extensive irregularities.

In light of the above, and in order to inform all employees of different professions, all sectors of production, national and international public opinion, we, the federation and trade union members of CIFWU, declare that we reject this draft law for all the reasons stated above and communicated in our letter to the Ministry of Labor and Social Affairs dated December 24, 2016. We declare that trade unions and federations have the right to use all legitimate means to defend the rights and freedoms of trade unions of workers and employees in all sectors. Such procedures are guaranteed at the national level by Iraq’s constitutional framework, and at the international level through the filing of an urgent complaint to the ILO concerning the continued violation of trade union rights and freedoms in Iraq from 2003 to the present day. We denounce the lack of commitment by the government to engage in social dialogue and social partnership, and the government’s attempts to promote legislation that negates the rights and freedoms of trade unions and attempts to take control of these organizations and influence their existence and work.

Hence, we affirm our rejection of the draft law for its violations of national legislation and international agreements, because trade unions were not informed during the drafting stage, and because the Ministry of Labor and Social Affairs did not take into account the legal criticisms submitted properly and officially by the trade unions regarding these violations. We call on the sons and daughters of the Iraqi working class to stand up against all attempts to limit freedom of association in any sector through this miserable legislation, and we call on civil society organizations at the national, regional, Arab, and international levels to stand in solidarity with Iraqi trade unions in their ongoing struggle for the consolidation of trade unions’ rights and freedoms in Iraq. We must prevent any form of interference in their affairs or attempts to circumvent the rights guaranteed by the new labor law and the agreements of Arab and international bodies to guarantee the right to freedom of association.

Glory and immortality to the martyrs of the Iraqi working class!

Federation of Workers Councils and Unions in Iraq (FWCUI) 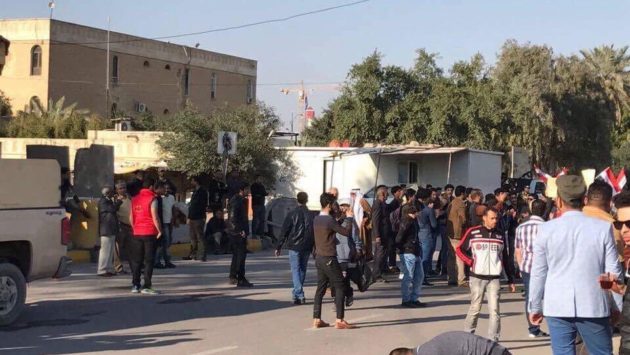 A Successful Dialogue Session about Fair and Just Work Practices