During Holy Week the Chaldean Patriarchate of Babylon  held a 140 kilometer Peace March  “open to Christians and Muslims”, to ask for the gift of peace and an end to all violence in the Middle East. The route started in Ankawa (suburb of Erbil) and ended in  Alqosh, a city abandoned by its Christian inhabitants when it  was occupied by Daesh in the summer of 2014.

“I will lead the march,” said Chaldean Patriarch Mar Raphael Louis Sako as he spoke about his Church’s intentions to promote peace, rapprochement and dialogue. The March provided a “great occasion for unity,” and represented a common front against the violence and bloodshed that have scarred the country and the region. Over 100 people took part in teh Walk, many of them Iraqis but also people from other countries. Participants in the march met in Erbil on 9 April 9 and took part in the celebration of Palm Sunday before setting off. The March crossed urban centers and villages on the Nineveh Plain, where once a large majority of Christians lived. Some of them, after being released from jihadist occupation, now look like ghost towns.

The peace march was intended to bear witness to the hope of rebirth of the cities and towns of the Nineveh Plain, as well as  the will to overcome violence- including possible reprisals suffered by the civilian population in the conflict that is still underway in Mosul.. It also marks the beginning of the process of reconciliation in a population destroyed by years of sectarian fighting. Lent is a time of peace and Christians are duty-bound to renew their commitment to peace and reconciliation. They should not come under the influence “of a tribal mind-set that feeds on revenge”.  Sako stated “There is no forgiveness when everyone tries to take the law into his own hands. It is up to us to open our eyes to the importance of peace, dialogue and coexistence.”

“Something is moving in Iraq. [. . .] Finally, people are choosing to build bridges rather than put up barriers. Prominent politicians and religious leaders have spoken out against a sectarian mind-set, and speak openly in favour of the separation of state and religion, a civic regime that guarantees citizenship to all” continued Sako.

“Peace,” he stated “must be achieved by us (religious leaders) as well as politicians, through courageous initiatives and responsible decisions.” This is why, along with the peace march at the beginning of Holy Week, the Chaldean Patriarchate organised “several meetings to celebrate the Via Crucis, using as stations, places in the Nineveh Plain, like Tall Usquf and Batnaya”, freed from Jihadi presence. 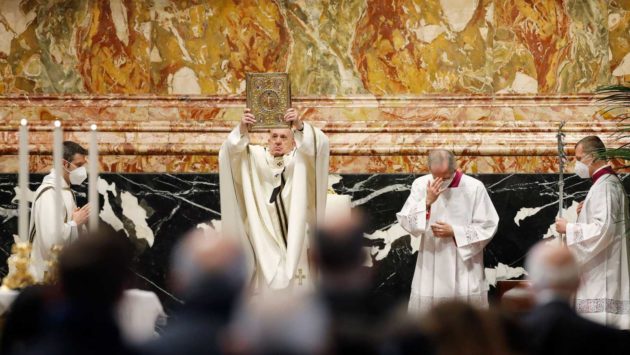