partners with rural and displaced communities and civil society activists who struggle for peace and respect for their rights.

Iraqi Kurdistan has been facing the biggest crisis in the history of the region for almost two years. The regional government have shut down public service projects and have not been able to pay the full wages of it is own employees. Furthermore, there are many other political problems that had made it difficult for the government to work. Therefore, the workers in the city of Sulaimani and surrounding areas have peacefully protested for more than a year. The teachers have closed the doors of their schools and universities. In the latest demonstrations, the students and workers from other governmental institutions had joined the demonstration in the hope that the government would respond to their demands, they are demanding for their full salaries to be paid and to stop corruption in the public sector.

The workers from the city of Erbil and Duhok also tried to demonstrate for their basic rights. The security forces soon ended those demonstrations and have arrested and beaten many civil society activists as well as workers.

Teachers and other government employees organized the biggest demonstration demanding for their full salaries and to stop the corruption in the government sector.  ”This is a victory for us. Teachers brought many employees from different governmental institutions to protest for their basic rights that had been denied by the government” said one of the teachers.

CPT has been accompanying these protests as it was required by the teachers to keep the demonstrations as peaceful as possible The security forces tried to end the protests but teachers emphasized that they cannot open their schools until their demands are meet.

Awat Hassan Abdulla is a civil society activist and one of the main organizers of the teachers’ protests that are currently happening in the city of Sulaimani. Since the beginning of the school year in September 2016, the teachers are on a strike and demand that their full wages be paid and that the government sector will stop and deal with its internal corruption. The schools and universities remain closed until now. Christian Peacemaker Teams (CPT), an international human rights organization, have been in contact with Mr. Awat Hassan Abdulla and his family, who requested that we accompany them. Mr. Awat and his family have been receiving threats and following a series of violent detentions and beatings by the Security forces (Asaish), the last one took place on the 1 December 2016, he and his family fear for their safety and lives. CPT agreed to accompany him and his family. 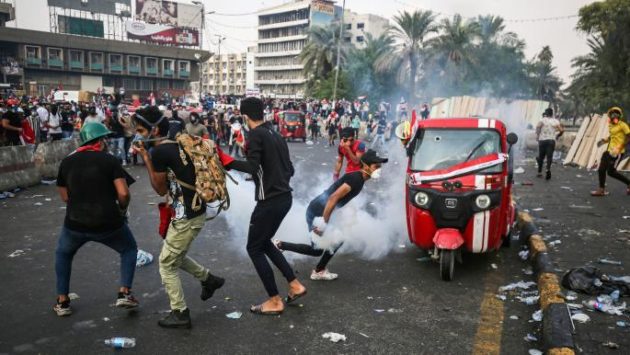