The Iraqi Civil Society Solidarity Initiative [ICSSI] has received devastating news from our partners on the violent repression of last Friday’s demonstrations in Baghdad. Among them, the Press Freedom Advocacy Association in Iraq denounces that Iraqi Security forces have attacked members of the ‘Huna Baghdad’ Satellite Channel who were covering demonstrators flooding the Parliament building in the Green Zone. One journalist of ‘ANB’ Satellite Channel has been severely injured with a gunshot on his leg, lost consciousness, and is now hospitalized.

This information comes following a report from the Reuters News Agency:

Yesterday, a large funeral have been organized for two of those who were killed: Hussein Hassan Mohi and Haidar Mohamed Hassan in Baghdad.

What the Press Freedom Advocacy Association in Iraq has further reported is that 14 journalists were wounded while covering these demonstrations. Among the wounded were three cameramen from the NRT Arab Channel who were subjected to a barrage of rubber bullets, stun grenades and tear gas. Security forces also destroyed the camera of the team.

The Press Freedom Advocacy Association in Iraq considers these events to be a flagrant violation of the constitution and the laws of Iraq, and a clear attempt to suppress free journalism in Iraq. The Association holds the Iraqi Prime Minister Haider al-Abadi, who is commander in chief of the armed forces responsible for these acts that threaten and violate the safety of all journalists. The Association demands that Abadi immediately open an investigation into the facts of these events to determine who was responsible for the shootings and violence and to hold all perpetrators accountable.

The association renews its promises to prosecute the Iraqi Security Forces Officer who shot on the leg of the cameraman of ANB Satellite Channel. Such an attack is the first of its kind in Iraq since 2003, as the country since then had never witnessed attacks against 14 journalists in few hours. Despite the attacks and threats by terrorist organizations and sectarian militia over the past years, last Friday was the roughest and most dangerous for journalists in Iraq.

Civil society in Iraq launched a Hashtag over the Social Media to demand a fair trial for those who killed the protesters and injured others. The hashtag “#‎justiceforiraqidemonstrators” has been associated to the following statement:
“We are the Iraqi people, asking for a fair trial for the corrupted officials and those killing and wounding the demonstrators, who only demand political reforms.
On May 20, 2016, the Iraqi government has ordered security forces in the Green Zone to open fire on protesters, killing and wounding dozens of them. We ask people of conscience around the world to show solidarity with the victims and pay attention to our suffering, in the struggle against  our corrupted government and the parties who violated the constitutional right to protest and to demand reform and justice”. 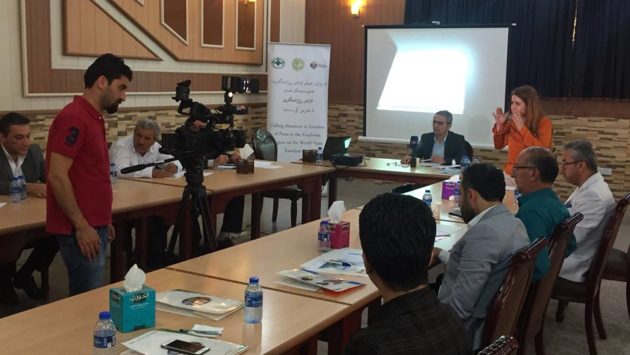