On Friday, 2 February, a number of activists involved in the protest movement in the city of Nasiriyah were hit and beaten with sticks by a group of masked men during their peaceful and organized demonstrations.

This brutal assault took place in the presence of security forces who were there at the site of the attack, yet did not move to ward off the offenders and protect the peaceful demonstrators, despite an appeal for help from civilian activists.

Such attacks are not the first of their kind. Recently, similar assaults have occurred in Baghdad, as well as in the Iraqi Kurdistan region, and in other Iraqi provinces. In each place, peaceful protestors have been threatened and arrested, and every time, the security forces simply standby, ignoring the violence, and failing to arrest the attackers. The protest movement has suffered many attacks since its launch in mid-2015, and they continue today, despite the broad support protesters have obtained, and despite recognition by most of the Iraqi political parties on the legality and legitimacy of the movement’s demands. We have assembled in Istanbul in a Strategy Workshop for joint action between the Iraqi Social Forum, the Iraqi Civil Society Solidarity Initiative (ICSSI), representatives from Iraq and the international community from Europe and the United States. We are united in condemning these acts of aggression, and we are profoundly concerned about the Iraqi government and its forces’ failure to protect civilian demonstrators. By abandoning the peaceful protesters, these political authorities have systematically failed to uphold the Iraqi Constitution, which guarantees the right to demonstrate peacefully. They have also failed to uphold International standards of Human Rights, in particular the International Covenant on Social and Political Rights, a treaty to which Iraq is a voluntary member.

We call on the Iraqi government, its judicial authority, and the public prosecution to conduct an immediate investigation into the attacks. The offenders must take responsibility and be brought to justice. We also call for those security forces who stood by and watched the brutality occur to take full responsibility for their inaction, and be held accountable for allowing the offenders to escape.

We also call on the UN Human Rights Office within the UN Assistance Mission for Iraq (UNAMI), and Representatives from the European Union, and embassies of European countries in Baghdad to urge the Iraqi government to make serious and direct efforts to stop further attacks, and to fulfill the commitments of the Iraqi government and the Kurdistan Regional Government to respect the right of expression and peaceful assembly in Iraq.

We also express our support for and solidarity with the Iraqi protest movement in their struggle for another better Iraq. 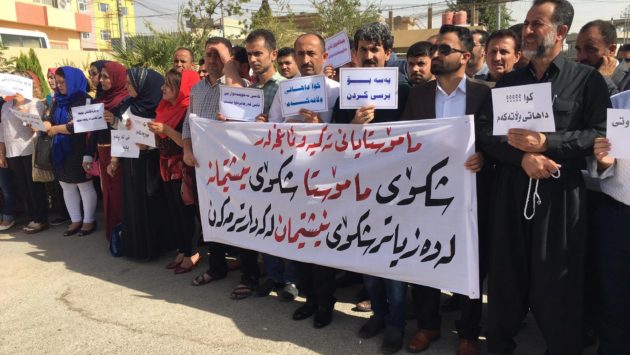