Nothing concerned Dominican Iraqi monk Najib Michael from the Dominican Fathers Church in Paris more than saving his manuscripts before Daesh terrorists reached them in Mosul and Qaraqosh.

Michael’s attempt to smuggle 800 manuscripts to Kurdistan Region coincided with Daesh’s control of the ancient Syrian city Palmyra, which raised fears for the city’s historical legacy.

He spoke about how he saved manuscripts that date back to the 13th and 14th centuries. “I had to rescue the preserved manuscripts in the Dominican library in Mosul and then in Qaraqosh from the organized destruction caused to the non-Islamic cultural heritage.”

The manuscripts include historical and philosophical texts, Christian and Islamic literature, and music written in Armenian, Syriac, Arabic and Aramaic.

The manuscripts, with beautiful artistic fonts and decorated footnotes, are testimony to the ancient history of Christianity in the area between the Tigris and Euphrates rivers.

Francoise Brickell Hautnah, a French historian, said, “In the world, there are still 50 known manuscripts written in Syriac, the language of Christianity in that region, which dates back to pre-Islam, mostly reserved in the London Library, and the oldest dates back to the year 411. While the Dominican manuscripts in Mosul are not that old, according to Michael, “They are like bridges between civilizations that witnessed the past and say a lot about the present”.

A high-quality reproduction of seven of those manuscripts are exhibited at the National Archives in Paris until August 24 as part of the “Mesopotamia, the intersection of cultures” exhibition.

In July 2014, days before the fall of Mosul and Qaraqosh to Daesh in northern Iraq where the Christian presence is large, Michael became concerned. “We evacuated a large part of the manuscripts of Qaraqosh to Erbil in Kurdistan 70 km away in a truck,” he said.

On August 7, the monks who remained in Qaraqosh fled Daesh’s control.

Michael recalled, “Chaos reigned because of the heavy displacement of Christians and Yazidis fleeing to Erbil … We could see the black flag of Daesh from afar. Kurdish Peshmerga forces protected us at that time, but they didn’t allow us to pass with our cars on the border, so I started to load the boxes of manuscripts to people for crossing the boarders”.

Watheq Qassab, who works for the Dominican in Mosul and Qaraqosh, said, “Shots were fired over our heads and I thought we were going to die”.

On this day, Daesh allowed the displaced people to cross without fire, and all manuscripts were transferred to a safe place. “I carried six boxes; they were heavy and I couldn’t run,” said Qassab. “At that time, I told Najib, ‘We will be killed because of your archive,’ pointing out that fortunately there was a car waiting for us on the Kurdish side of the border”.

Several years ago, Michael launched a massive project to save the ancient manuscripts in Mosul. Rather than rewriting them, the 20th century made it easy to put them on hard disks. “Since 1990, we have prepared a digital data of a total of 8,000 manuscripts in the region. But today, half of the originals no longer exist; they were destroyed by Daesh,” said Michael, noting ruefully the destruction of archaeological sites in Nimrod and Hadhar.

In Iraq, the clergy didn’t just save Christian manuscripts. “The monks translated two holy books of Yazidis,” said Michael. And he himself translated into French “Moshaf Rash” (The Black Book) and “Al-Jallo” (The Vision Book) in the framework of a thesis on Yazidis that he prepared for the University of Fribourg in Switzerland. 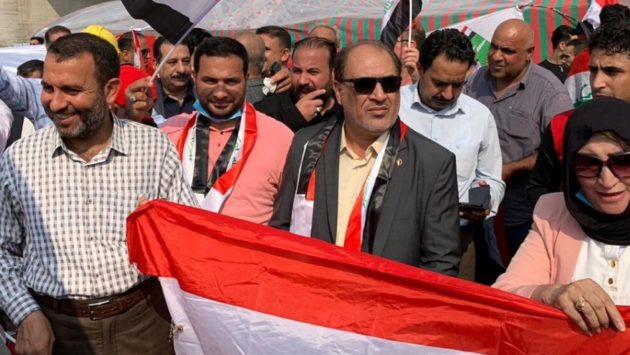 A Successful Campaign Training in Nasiriyah