The international organization, Solidarity Center, has issued a new newsletter entitled ‘Iraqi Trade Unions Bulletin’. The new bulletin includes a summary and review of the conditions of workers, and highlights the increasingly serious challenges faced by public sector workers in light of the sharp deterioration of the Iraqi economy due to lower oil prices and continued political security crises.

The bulletin reported on angry demonstrations in the streets of Baghdad and various other provinces of Iraq, which were led and carried out by workers within the public sector and independent trade unions. Workers ​​demanded their rights and payment of their salaries, now long overdue. They also rejected the Iraqi government’s policy to reduce their salaries and the plan for massive layoffs of huge numbers of workers. The bulletin pointed out that these demonstrations continued despite clashes with the police and security forces, and the arrest of a number of labor activists in Baghdad. The bulletin further underscores that this labor movement succeeded in achieving some positive results and gained some rights for workers, especially in the oil sector. A good example of successful protest can be seen in the north of Iraq where more than 17 thousand workers in a major oil company went on strike until they got their salaries paid, which they had been waiting for since 2013.”

The bulletin stated that “In spite of the difficult conditions within Iraq and the general deterioration of hope, Iraqi trade unions have enhanced the labor movement’s strength through their tireless efforts and campaigning.” Amidst great hardship and insecurity, workers in Iraq are continuing their nonviolent struggle for rights, and have issued an urgent call for the government to pass a new labor law. They seek solutions that will guarantee fair and equitable treatment for women and men workers, in particular, they want a guarantee that salaries will be paid to those who work in the vulnerable ‘self-financing’ companies of the Ministry of Industry, many of whom have not received their salaries for many months

The Solidarity Center is an international non-governmental organization with an office in Baghdad which works alongside the Iraqi trade unions and government institutions for modern labor laws which meet international standards. It aims to ensure that the rights of Iraqi workers are protected. 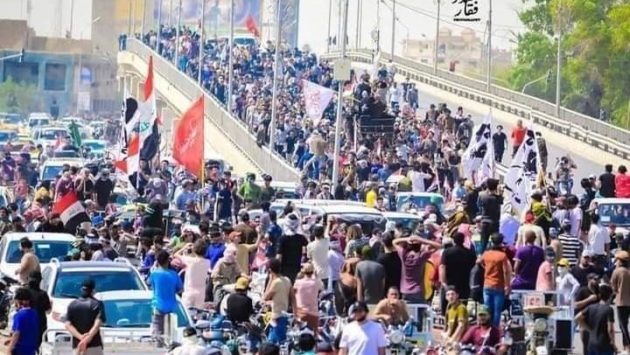