Updating the Save Tigris and the Iraqi Marshes Campaign- March 2015

The water crisis in the Middle East region is aggravating, turning from a shortage of water resources and chronic mismanagement into a complex crisis, due to the ongoing conflict in Iraq and Syria. Terrorist organization Daesh has used water as a weapon of war on several occasions. While air strikes are taking place near vital water infrastructure such as Mosul Dam and Haddetha Dam.

STC emphasized –in a previous statement- that water, and water infrastructure should not be used as war tools. In the light of the ongoing development the STC amended its strategies and priorities, as indicated in the ICSSI conference in Oslo.

2015 witnessed mutual visits of Iraqi and Turkish officials which gave the impression that there’s a mutual will to build positive relations between the two countries. The campaign urges the Iraqi government to disclose the details of the ongoing dialogue with Turkey. And the latter has to respect. International custom law which says that upstream states have to find consent of downstream states regarding the construction of new water infrastructure such as dams. This includes Ilisu Dam and the whole range of dam networks associated with it. Especially since the construction of Ilisu Dam is reaching an advanced stages, it is a threat to the water flow of the Tigris River, and creates a precedent for the construction of more dams. Since its foundation, the STC has advocated since to include in the dialogue between Iraq and Turkey not only the topic of equitable shares of water, but also to include a discussion on any possible future new dams as well.

At the same time, protection of Iraqi cultural and natural heritage is becoming more complex. Daesh attacked the sanctity of a number of Iraqi archaeological sites, threatening to erase the cultural heritage of Nineveh in the North of Iraq, something Iraq has never witnessed before in its recent history. Our campaign demands the Iraqi government and the UNISCO to install mechanisms to protect the archeological sites and to apply Security Council Resolution 2199. Our campaign demands that the WHC considers this matter a top priority; and to include the Iraqi Marshes into the WH list as a natural and cultural heritage. This would be a strong response to all attempts at erasing Iraq’s culture and heritage.

Al-Massala, a civil society organization based in Erbil, will be holding several activities to support the campaign, in coordination with ICSSI and STC. An important upcoming event is the steering committee strategy meeting in Erbil during the second week of May 2015. The objective of the meeting is to outline the campaign’s strategy for the coming period.

Furthermore, Al-Messala will perform field research regarding the impact of Ilisu dam, as well as other dam systems currently being built by Turkey on the Tigris River. The research will focus on the direct impact on the KRI with regards to water, security, environment, cultural heritage, as well as its impact on the peaceful coexistence between Turks, Kurds, Arabs, Assyrian, and all other peoples embraced by the Tigris River basin for thousands of years. The campaign believes that the Tigris River unites peoples and cultures. It can be a huge incentive to work for sustainable peace in the region.

Next to this, Al-Messala is planning to organize a legal and an academic seminar on the issue Ilisu Dam and other dams constructed on water flows from Turkey to Iraq.

The campaign will strengthen its advocacy efforts in the KRI. There will be multiple advocacy meetings with the provincial government and parliament, to bring to attention the research conducted and to voice the demands of the campaign. The organization will contribute in the production and circulation of material about the campaign and its objectives in Arabic, Kurdish and English

Meanwhile, STC in partnership with ICSSI, the ISF, PICST, INSM and IWPR – Iraqi organizations and networks based in Baghdad – are preparing the following activities:

Planned in the coming period is a youth camp in the marshes, to raise awareness of the campaign and its objectives, and to create ties with local communities likely to be affected by newly constructed dams such as Ilisu on the Tigris River. Awareness efforts will include topics such as the water crisis caused by political or military conflicts, and the right to water for all humans.

The partners in the south will conduct field research on the impact of new dams on the Tigris River, whether Ilisu or other dams in the central and southern parts of Iraq, as well produce awareness material about the campaign and its objectives. The campaign believes that, although it can be the source of conflict, water should be a uniting factor among Iraqis; Arabs and Kurds, Sunnis and Shiites. The campaign plans to conduct a legal seminar on the issue of dams, as well as an academic seminar, involving Iraqi experts, and to submit its recommendations to legislative and executive bodies.

In the advanced stage the results and recommendations will be presented in advocacy meetings targeting the Ministry of Water Resources, Ministry of Foreign Affairs, Ministry of Environment, the Water Committee in the parliament, and the presidency. The campaign will further involve other local agencies such as the provincial councils. Furthermore, the campaign will reach out to the clergy.

Call for Action to Protect the Marshlands of Mesopotamia! 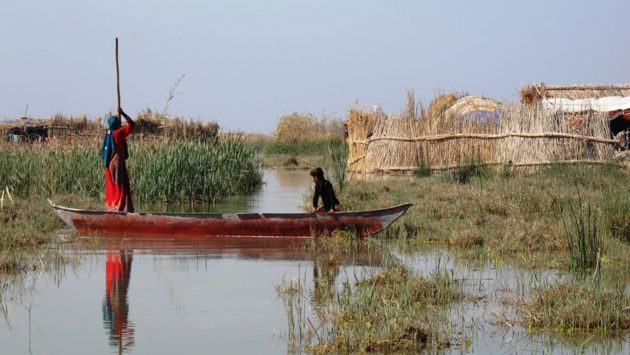