On Sunday, dozens of students in the College of Education for Girls in the capital Baghdad protested against the transfer of 19 professors from their college without finding alternative instructors of the same competence. The Dean of the college threatened to stop students from entering the college in the event that demonstrations continued. Meanwhile, security forces prevented media coverage of the demonstration.

Ihsan Omar, the vice president of the teachers association of Baghdad University, said in an interview with Al-Mada Press that “dozens of students from the College of Education at Baghdad University went out this morning to demonstrate in front of the building of the presidency at the university in Al-Jadiriyah compound, in the central of Baghdad, to protest against the transfer of 19 professors at the request of the college dean”.

Omar added that “the transfer of these professors from the College of Education for Girls exposed the absence of democracy in Iraq and violated the freedom of expression, a right dear to Iraqis.

M-P, a student in the college said that “The students are demanding the return of their professors given that without them, the college cannot offer students comparable courses”, asserting that “the dean of the college threatened all students who participated in the demonstration to revoke their college ID cards and prevent them from entering the college”.

The reporter from Al-Mada Press said that “The security forces had withdrawn his ID card and took him out by force, threatening to confiscate his equipment and destroy his notebook”, adding that “one of the security men from the university confirmed that the president of the University of Baghdad was reported to have prevented the entry of any media within the University”.

Dr. Anas Essam, an assistant professor in the College of Education for Girls said, “During my meeting with the assistant to the university president, he emphasized that this decision is without reason, and that it is wrong and senseless”, but he laid responsibility on the Ministry of Higher Education for implementing the decision, describing the transfer of the teachers as “capricious”.

Dr. Mahmoud Jabara, who had been a professor of economy in the College of Education for Girls, commented that “The decision taken by the Dean of the Faculty of Education of Girls, Shorooq Kadhim Salman, was a surprise for each of the 19 teachers who were transferred”.

Jabara said that “What was even more surprising was to tell us — without any advance notice, and in many cases, while we were giving lectures to students — simply to leave the college because we, as was said, had been transferred. At that moment, no one knew the reason for the sudden transfer, and as there was no previous warning, it made things confusing for us and for our students”.

Jabara added that “the transfer order that was issued gave no reasons for the transfer, and this is against the law because government employees can be transferred based on one of three established reasons: first, a transfer can be the result of a personal request made by the employee, second, a transfer can be made if the position is redundant, and third, a transfer can be a punishment — none of these exist as the basis for this order”.  Jabara wondered further ” who will write the students’ exams for the second term, and who will give the grades?.

Jabara said that “the timing of the transfer makes no sense at all; it would have been better had it occurred during the holiday so that it did not interfere with the education of our students or adversely affect their exams”.

Hala Ahmed, a postgraduate student in the College of Education for Girls, said that “five teachers from among the group that were transferred are supervisors to postgraduate students, and we wonder now who is going to oversee our theses”, noting that “the college dean replaced those professors with five women professors who, because of their qualifications and differing areas of expertise, are not entitled to teach postgraduate students nor can they supervise the rioting of theses”,

Ahmed noted that “we, the students, had no say in this matter and yet it is our fates that will be decided if no action is taken to do justice to the students, and also the teachers, who are the backbone of this college”.

In turn, (S-G), a student in the college said in an interview with Al-Mada Press that “The Dean of the Faculty of Education for Girls threatened to deny access to the university to all students who continue to demonstrate, taking our university IDs and preventing us from continuing our studies at the college.  In addition, the dean intends to require all students to wear a ‘uniform’, that is, ‘to dress according to/in the Islamic Abaya” (similar to the black cover Daesh demands that women wear).  She also plans to close the college gates at 12 AM, thus preventing students form coming and going, These new university regulations seriously violate the rights of the students of the college”.

She added that “all who came out in this demonstration know that the Dean of the College intended to target teachers, and we as students will not accept this — we will have our say, and it won’t be limited to this demonstration”. 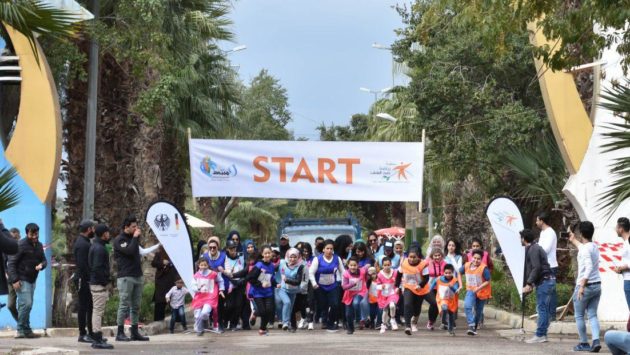 In Their Third Year, Kahramana Path Shines Demanding the Freedom of Running for Women