After the Iraqi government blocked access to some websites on the Internet recently, Iraq’s online activists are fighting back. One Canadian company making a portal to bypass blockages securely says that their Iraqi users have increased so dramatically over the past few months that they’re having trouble keeping up.

After Sunni Muslim extremists took over parts of Iraq beginning early June, the Iraqi government took several steps to halt or disturb online communications. The government made social media websites like Facebook, YouTube and Twitter, as well as messaging services like WhatsApp, Viber and Skype, almost impossible to access in certain parts of the country at certain times.

Authorities say they did this to prevent the Sunni Muslim extremist group known as the Islamic State, or IS, from spreading propaganda and rumours online and also to prevent military positions being disclosed via social networks.

However Internet-savvy Iraqis appeared to be ready to counter that. Only one week after the Internet was blocked, more than half a millionIraqis had downloaded the Psiphone application. Developed in Canada, the programme, which can be used with Android or Windows operating systems, allows users to bypass censorship or blockages.

“There has been a marked increase in the amount of Psiphone users in the Middle East,” the company’s CEO, Canadian Karl Kathuria, told NIQASH in an interview on the sidelines of the Internet Governance Forum, or IGF, held in Turkey earlier this month. Kathuria credits the increase to the fact that governments in countries like Iraq and Turkey blocked online activities.

“The amount of people who were suddenly using our software inside Iraq was another test of our ability to provide this service,” Kathuria noted. “It was certainly a challenge. But we managed to redirect resources in order to increase capacity and make sure Psiphone was accessible to anyone who wanted it.”

Based on numbers from Psiphone, Haidar Hamzouz, an Iraqi blogger and activist, who is a coordinator with the Iraqi Network for Social Media, says that Iraq’s digital activists are some of the most active in the region. “This level of activism made the company reconsider the country and aim to provide better services here,” Hamzouz suggests.

In the Middle East the accounts of digital activists are often under tight surveillance by the authorities of the countries they live in, adds Hamzouz, who has himself been beaten for his online work.

Online surveillance was the topic of heated discussion between Arab and international bloggers attending the conference and Vinton Cerf, who is widely known as one of the “fathers of the Internet” and who now also acts as Google’s “Chief Internet Evangelist”.

The discussion centred on how the huge US firm Google intends to protect  the privacy of users. Cerf says that Google gets increasing numbers of requests for information on users from governments but that they will only give the information out if there are judicial orders involved. 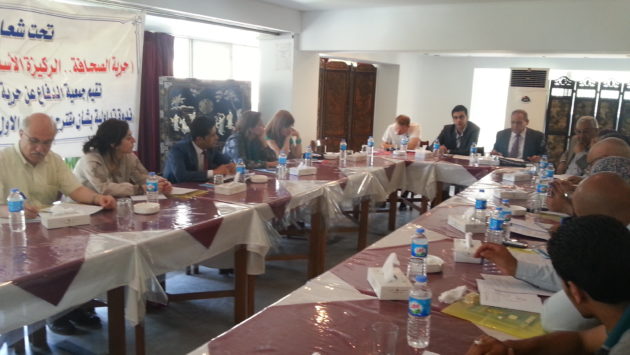