Our country, Iraq, is suffering under the weight of a merciless attack which threatens our territorial integrity, seeds discord between the various sects of the Iraqi people, which cares not a bit for the safety of the people, and which shows a complete and utter disregard for the lives of Iraqis. The brutal and ongoing attack is forcing Iraqis to leave their jobs, their homes and their cities. It threatens to undermine and destroy the civil peace Iraq once had.

The preoccupations of Iraq’s ruling class; their petty political disputes, their tireless grasping for authority, and their narrow concern to satisfy their own private interests, has blinded them to the horrors civilians are enduring, and allowed them effectively to ignore the cruelty of the ruthless attack that is crushing our civilian brothers and sisters in many areas throughout the country. Despite the eerie silence of much of the international community on the suffering of displaced Iraqis,despite the unprofessional, biased and partial reporting on the crisis by local and international media, we, the Iraqi people, are standing up to confront and overcome this devastating crisis. To this end, we call upon friends and colleagues of the Iraqi civil society movement, on Iraqi NGOs, on civil activists from all over the world, to rise up together and take on our responsibilities as advocates for humanity. We must act on our deep faith in the principle that: “life, food, security, housing and healthcare should be fundamental rights for all human beings”. This basic idea must be our starting point, as well as the conviction that military operations are not the only solution but should, whenever possible, be replaced with constructive political, social and economic solutions that respect the rights of all Iraqis. Only given this foundation will we achieve a lasting and unshakable peace.

We call up on you, wherever you are and with whatever capabilities you have, to organize demonstrations and other kinds of civil activities that advocate peaceful coexistence and the acceptance of ‘the other’. We must celebrate the idea that  being different doesn’t mean being an enemy. This has always been the way with Iraqis: different, but living peacefully together in all their rich diversity. This historical truth must be recognized and remembered, especially now when there are those who aim to seed discord and hatred among groups who can and have lived together peacefully.

To all those who want to join us, we suggest the following activities:

We ask you all to document your activities, and to publish them under #Iraqieen and send them to us for further dissemination.

Or call the following Numbers: 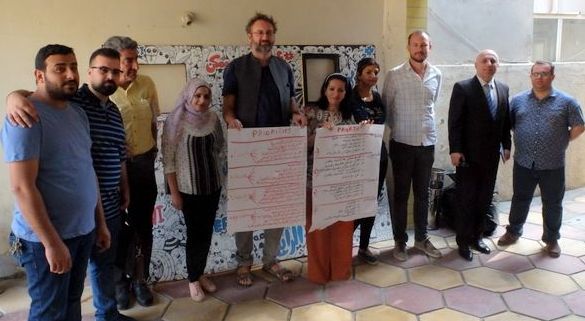 An Alternative Vision For the Iraqi National Budget