Dhaka, Bangladesh, 24th November 2011 An Iraqi delegation composed by eight members of the Iraqi Civil Society Solidarity Initiative (www.iraqicivilsociety.org) took part in the South Asian Social Forum (Dhaka, 18-22 November 2011, www.wsfsouthasiabd.org) meeting local representatives of social movements, unions, professional organizations and political parties of Bangladesh. South-South coordination proved to be fundamental to break the isolation of Iraqi civil society. On November 23rd in Dhaka a meeting was held between the Iraqi delegation and seven local political parties and union members, aimed at creating direct links with Iraqi social movements, not mediated by Iraqi governmental forces.  Activists from Brazil, Belgium, Germany, Palestine, Tunisia, Morocco, India, Italy, France, Pakistan, Canada, and Turkey’s Kurdistan participated in the meeting as well. Iraqis spoke about the need of creating direct links with the people of South Asia and its social movements. Due to Iraq’s isolation for decades form its geographical surroundings and from the world social movements, political life has been controlled by parties and Iraqi communities didn’t have opportunities to discuss about regional and global issues. The Iraqi delegation stressed that such an absence from the global civil society must end: Iraqi social movements, unions and NGOs must take initiative to join international struggles for freedom and social justice. Participants in the meeting stressed on the urgency to re-establish an Iraqi cultural and political role in the region and the world, wishing the complete withdrawal of US troops. Turning the page of war and occupation is essential to develop a new scenario where social and civic action re-builds on new bases what was destroyed by war. The Iraqi delegation finally took part in the International Council of the World Social Forum, where the plan to organize in 2012 the Maghreb-Mashreq Social Forum (Tunis) and in 2013 an Iraqi Social Forum (Baghdad) was discussed and approved. The second will be an open space for independent movements and networks operating in Iraq, with a clear position against the project of New-Liberalism that western powers tried to implement through the war, which aims at full transition to the market economy and domination of Iraq by corporations and capital. Iraqi people hold human rights, national sovereignty and social justice higher than economic profit, and will resists foreign grab of their resources. The Iraqi group was composed by representatives of the Engineering Professional Union (Electricity section), Al Masalla Organization for Human Resources Development, Iraqi Women Network, Tamouz Organization for Social Development, Information Centre for Research and Development, Basrah Civil Forum, Iraqi Centre for Research and Studies, in addition to the Italian NGO Un ponte per… (www.unponteper.it) who facilitated coordination through the Iraqi Civil Society Solidarity Initiative. Active support of the network Alternatives International (www.alterinter.org) and financial help by Karibu Foundation (www.karibu.no) have been essential to allow participation of Iraqis in the five-days Social Forum, a massive event whose opening march on November 18 saw 20.000 activists take the streets of Dhaka to promote participatory democracy and social alternatives to capitalism.   Download the press release in Arabic: 2011 11 24 Press Release ICSSI Dhaka AR 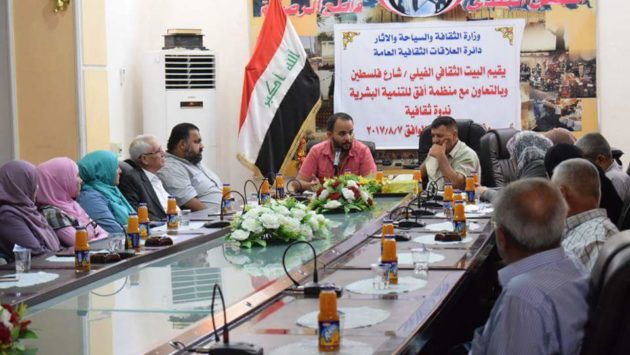 The Perils of Private Education: A Seminar by the Ofok Organization and the ISF

Iraqi youth interpreters and translators, assert that: another Iraq is possible!