Statement published on June 23, 2014, by the Organization of Women’s Freedom in Iraq. The Iraqi society is suffering unprecedented crisis that threatens the future of peaceful co-existence of citizens, and augments genocides and civil conflicts based on the sectarian identities that were established on the Iraqi population, and were strengthened throughout more than a decade of the American occupation to Iraq.

Mosul City has fallen along with Tikrit, and previously Fallujah, under the control of considerably small troops of the Islamic State of Iraq and Syria (ISIS). The war continues in other cities like Tel Afar, Samaraa, and the cities of the western region. If the occupiers’ mission succeeds, a large part of the Iraqi society would be ruled by a brutal Islamic state that does not fit in our modern world whatsoever; a state which sees an enemy in every human being  who needs to be “disciplined” through humiliation, beating, and killing until he/she becomes good enough to fit within the extreme religious “set of morals”. This is a state that easily kills “apostates” and commits genocides against the religious and political opponents, a state that regards women merely as packages of flesh ready for the entertainment of the Mujahideen. Many Fatwas come out to ensure women’s humiliation under being “gifted” for the new Caliphate-age rapists, under the legislation of the so-called Jihad Al Nikah”. In spite of all these atrocities, a number of the residents of the fallen cities joined them as a reaction to eight years of systemic sectarian subjugation under  prime minister Nouri Al Maliki’s rule.

The American occupation’s policies resulted in the empowerment of the Shia Political Islam and gave them the upper hand in Iraq in the orchestrated Democracy. The US administration continues to deny the knowledge that their favourite political religious group would persecute other religions and sectarian divisions, once they are in power, and that it was only a matter of time before it takes place. It is very disturbing when the American media illustrates an image of Iraqis as “ sectarian groups in conflict since the beginning of time”. This media denies the role of the US Administration in planning for a political divide on basis of religions, sectarian divisions, and ethnicities; in fact, the US Administration adopted religious and ethnic representation since 2003, which could only fuel a full scale sectarian conflict. The sectarian civil which we witness today, is just the normal result of the US strategic plan to divide the Iraqis on sectarian and ethnic lines.

The human beasts of ISIS escorted hundreds of Iraqi soldiers to isolated sites and committed horrifying genocides against them, demonstrating lack of any humanity while performing genocide under the name of so-called “ Jihad”. They knocked at doors of civilians’ houses in Dendan, Wihda, and Zuhur residential areas in Mosul city, and captured 18 unmarried young women, to be raped by ISIS warlords under the sway of the so-called “ Nikah el Jihad” [Jihad intercourse], which resulted in four female victims committing suicide, in addition to one male who was a brother of one of the victims who committed suicide  because he was unable to protect his sister and prevent those ISIS fighters from raping her. Unsatisfied with the crimes they have already committed, ISIS warriors performed punishment of cutting-off hands and flogging everyone who pronounced the name of ISIS with no grandiloquence. All these practices reflect a mix of brutality of Baath regime, a primitive chauvinist tendency to humiliate and practice religious superiority.

While the Iraqi society is striving to absorb the shock of their government’s failure,  millions of Iraqi young men are driven to volunteer to fight the brutal and inhuman ISIS without any  military training whatsoever, in battlefields which are financed by neighboring countries who are placing their bets on their representatives in Iraq. Meanwhile, Al Maliki government chants for  nationalist patriotic rhetoric in order to push the youth of Iraq into deadly battles, in order to defend their corrupt and sectarian state and agenda. And the day has come when the Iraqi people have to pay the price for the farce of the “democratic” political process in Iraq.

The American administration is overlooking the catastrophic situations of  millions of people in Iraq who lost their livelihood, well-being and security because of the poisonous sectarian politics brought forward by the US occupation. And meanwhile, Mr. Barak Obama comforts his citizens that the “Oil exports from Iraq will be stable”.

OWFI declares its solidarity with the civilians and residents of the Iraqi occupied  cities, and calls upon the freedom-loving Iraqis to organize their popular committees, and to defend themselves and women from assaults committed by ISIS. OWFI will seek alternatives to open new shelters to protect female victims from these human beasts. OWFI calls upon all international organizations and decision – makers to take necessary political and diplomatic steps to intervene and stop the disaster of a full-scale sectarian conflict that jeopardizes lives of millions of people and would last until all civilized aspects in Iraq are demolished.

Al Maliki’s government , which is the main source of sectarian division and resulting conflict has to leave its position. The people of Iraq will no longer allow such criminal political parties to trample on our fates and lives.

Long live the people and women of Mosul,Tikrit, Fallujah, and Tel Afar, free and proud!

Down with the terrorist ISIS, the creation of the criminal Qaeda and  dreadful occupation!

Organization of Women’s Freedom in Iraq 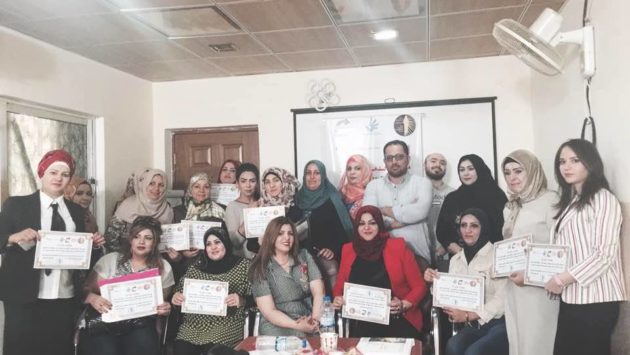